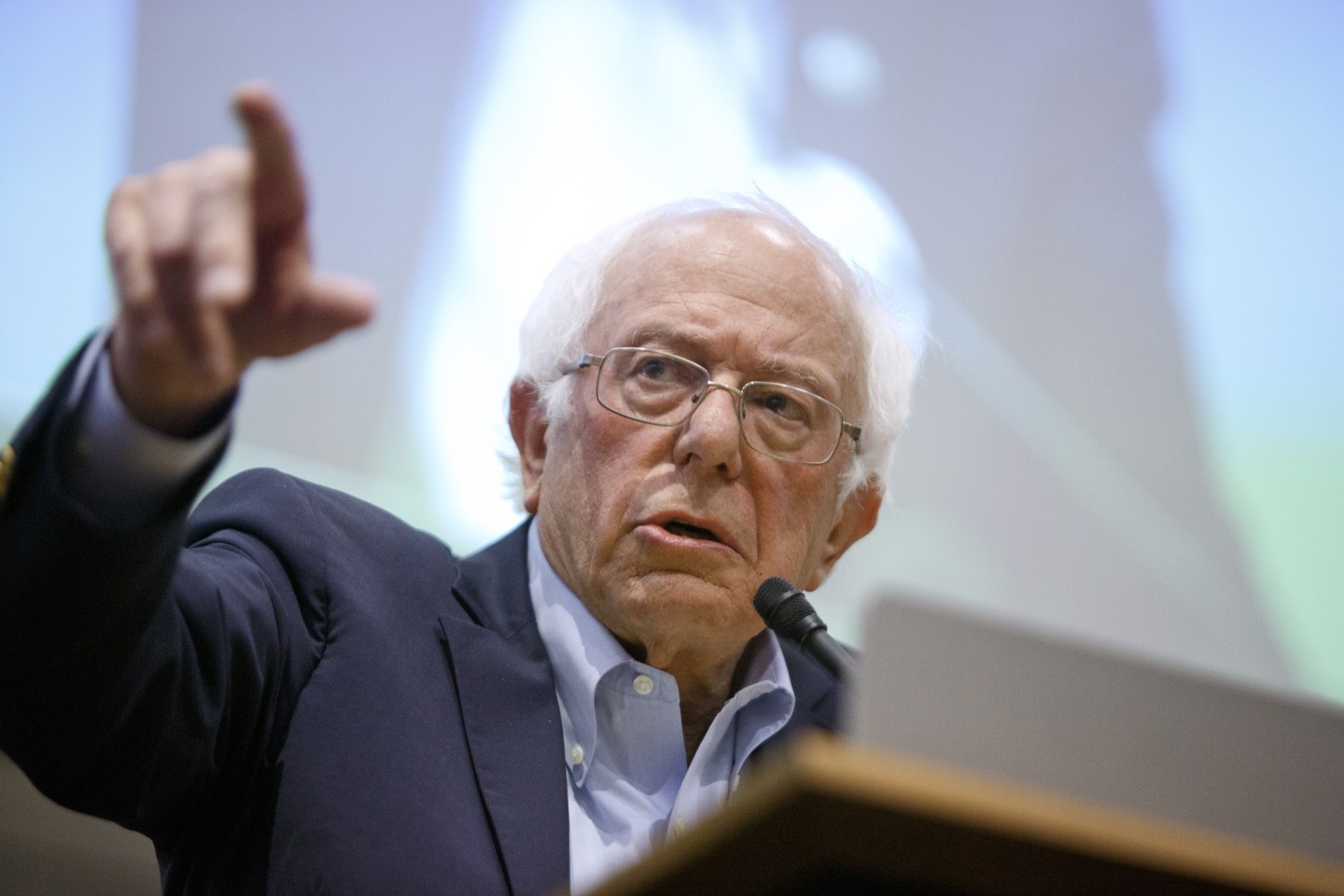 Senator Bernie Sanders, an independent from Vermont and 2020 presidential candidate, speaks during a Chicago Teachers Union Strike Authorization Vote Rally in Chicago, Illinois, U.S., on Tuesday, Sept. 24, 2019. Mayor Lori Lightfoot has been studying lots of numbers as she prepares Chicago's budget, and her first big test may come from the citys teachers this week. Photographer: Laura McDermott/Bloomberg via Getty Images
Laura McDermott—Bloomberg via Getty Images

Bernie Sanders’ campaign said Wednesday that the Democratic presidential candidate had a heart procedure for a blocked artery and was canceling events and appearances “until further notice.”

The 78-year-old Sanders was taken to a Las Vegas hospital after he experienced chest discomfort during a campaign event Tuesday and sought medical evaluation. Two stents were “successfully inserted,” and Sanders “is conversing and in good spirits,” according to the campaign.

Sanders’ wife, Jane O’Meara Sanders, was en route to Las Vegas on Wednesday and said in an email to The Associated Press that her husband was “doing really well.”

Tick Segerblom, a Clark County, Nevada, commissioner who was at Sanders’ fundraiser Tuesday, said the senator seemed fine at the time. “He spoke well. He jumped up on the stage. There was just nothing visible,” Segerblom said.

The Democratic field’s oldest candidate, Sanders sometimes jokingly refers to his age at town halls and other events, especially when interacting with younger participants. He is one of three candidates over age 70 in the Democratic primary, which has spurred debate over whether the party should rally behind a new generation of political leaders. Sanders’ health issue is certain to revive that discussion in the weeks before the next presidential debate this month.

Sanders’ campaign wouldn’t say whether the candidate had suffered a heart attack before the blockage was opened. But a doctor not involved in the care said, if not, Sanders could expect to be back to a normal busy schedule in about a week.

“This will give him more energy,” said Dr. Ron Waksman, an interventional cardiologist at MedStar Heart & Vascular Institute in Washington.

Sanders’ hospitalization came on a day of celebration for his campaign, which had earlier announced the Democratic field’s strongest quarterly fundraising numbers so far. On a telephone call with supporters, campaign manager Faiz Shakir said the “state of the campaign is strong” and touted its fundraising totals and its first television ad campaign scheduled to launch in Iowa.

But those spots were suspended on Wednesday.

The health issue comes as Sanders has been trying to turn a corner after a summer that saw him eclipsed as the premier liberal in the field by Massachusetts Sen. Elizabeth Warren. Sanders has dropped well behind Warren, 70, and former Vice President Joe Biden, 76, in most polls and recently reshuffled his staffing in early states to become more competitive.

“Given his recent stalls in the polls, the timing is pretty bad here,” Democratic strategist Jim Manley said of Sanders’ heart procedure.

Sanders’ 2020 rivals were quick to wish him well. Warren told liberal activists in Las Vegas that she called and texted Sanders and that she “wants to see him strong and back on the trail as soon as possible.”

“We want to send our best wishes for a quick recovery to @BernieSanders today,” tweeted Julián Castro, an Obama administration housing chief. Added Sen. Kamala Harris of California: “If there’s one thing I know about him, he’s a fighter, and I look forward to seeing him on the campaign trail soon.”

Sanders mounted an insurgent campaign against Hillary Clinton for the Democratic Party’s presidential nomination in 2016. He is a top contender in the 2020 primary and announced Tuesday that he raised more than $25 million over the past three months. But he is facing stiff competition from Biden and Warren, who have overtaken him in many polls.

This is the second time during the 2020 campaign that health problems have forced Sanders to ease up on what has otherwise been a robust campaign schedule. Just last month, he canceled some appearances in South Carolina because he lost his voice. The campaign said at the time he felt fine.

Sanders is not the first candidate to face health issues in recent years while seeking the presidency. Clinton had to take time off from campaigning in 2016 after being treated for pneumonia.

In 2000, former New Jersey Sen. Bill Bradley, the leading Democratic challenger to then-Vice President Al Gore, had to cut short a campaign swing for treatment of an atrial fibrillation, an irregular heartbeat that is treatable but potentially serious. Bradley later resumed his campaign.

In Sanders’ case, when doctors insert a stent, they first thread a tiny balloon inside a blocked artery to widen it. The stent is a small wire mesh tube that then is propped inside to keep the artery open. The number of stents needed depends on the size of the clog.

The treatment can immediately improve symptoms such as chest pain or shortness of breath. The stents are threaded into place through blood vessels in the groin or wrist, requiring only a tiny incision. Most are coated with medication to prevent the targeted artery from reclosing. That is still a risk, requiring monitoring, and patients also often are prescribed blood thinners to prevent clots from forming in the stents.

A letter released by Sanders’ physician in 2016 cited a history of mildly elevated cholesterol, but no heart disease.