A Women-Run Travel Agency Leading Adventure Trips for Women Only 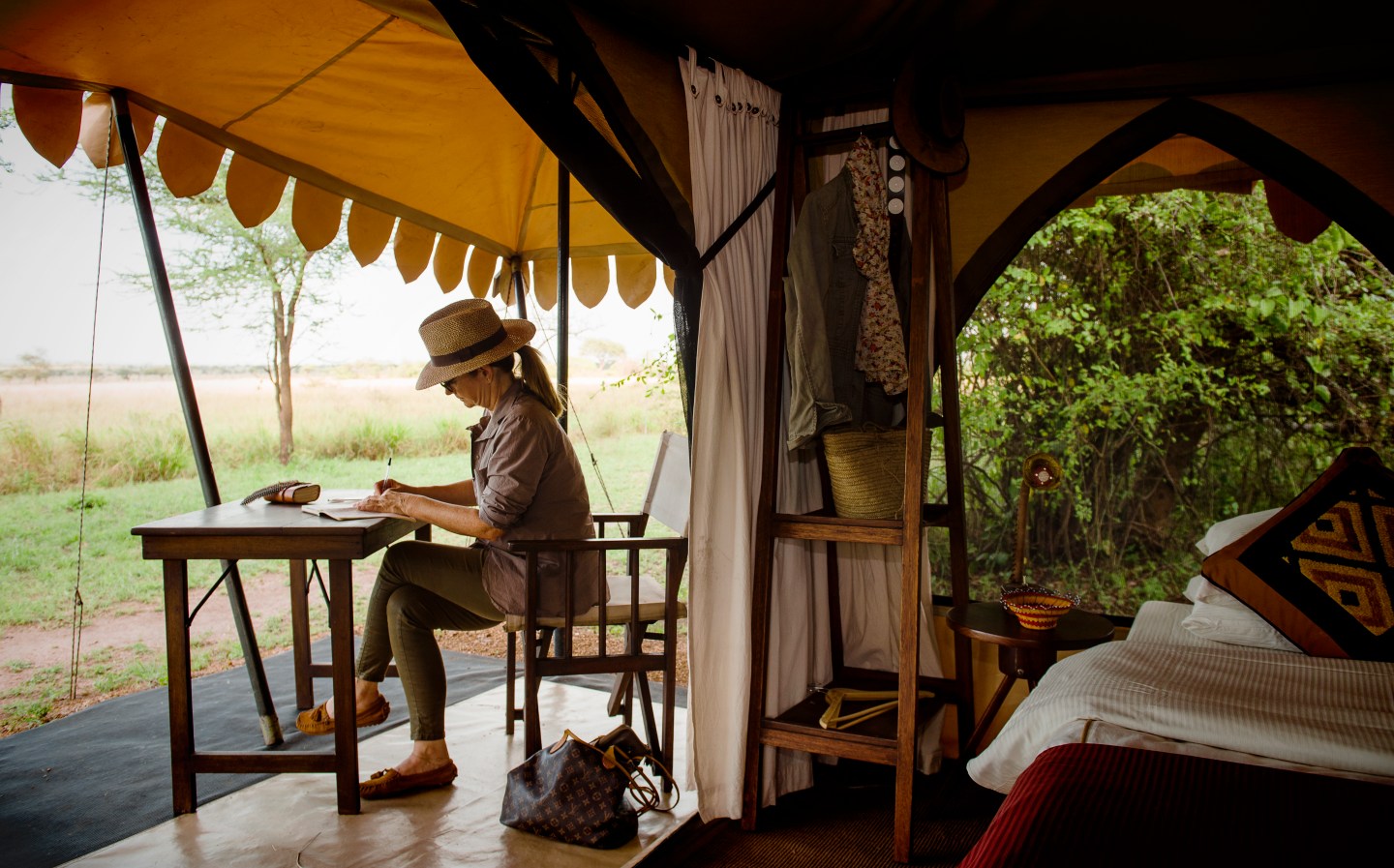 A woman writing in her journal after a safari tour with AdventureWomen, a female-run tour company running tours for female travelers.
AdventureWomen

Like many of those bitten by the “entrepreneurial bug,” Judi Wineland says the inspiration behind her first business was a personal passion. In her case it was global adventure travel.

Run by a mother-daughter team—Wineland and her two daughters, Erica Landerson and Nicole Wineland-Thomson—AdventureWomen has been running tours around the world for over 23 years with the intent purpose of empowering women through travel. Offering a wide range of women-only tours to over 30 countries annually, Wineland describes AdventureWomen as a “relationship company,” where women can form connections with their fellow travelers while exploring new frontiers and outdoor activities.

But wine-tasting and beach vacations, these are not. (Although both of those activities might possibly be arranged for among otherwise action-packed itineraries.) Tours range from Trans-Siberian Railway trips to cruises around Antarctica and the Galápagos. Then there are the “bucket list” journeys, such as climbing as far as the Everest Base Camp or hiking the Inca Trail to Machu Picchu in Peru.

Aside from gender, there are few rules or restrictions to who can sign up for the trips. AdventureWomen says they welcome all active and interested women across cultures, whether they be single, married, divorced, or widowed. Landerson notes that while most guests are in their forties to sixties, there have been guests as young as 30 and also ready to go at 88.

“I truly believe that adventure travel is transformational for all those who experience it,” Wineland says. “It broadens your understanding, teaches you new things about yourself, and excites your curiosity about the world and other cultures.”

According to the team, in 1978 Wineland became the first woman to launch and operate an adventure travel company in the U.S.—Overseas Adventure Travel, which she has since sold—and has subsequently cofounded other award-winning adventure travel firms.

“I wanted to turn my passion for travel into a budding business, becoming the first female entrepreneur in the adventure travel industry and the leader of the East Coast’s only adventure travel company,” says Wineland. She met her husband, Rick Thomson, in 1979 while traveling through East Africa. They worked for different companies at the time but decided less than two years later to found their own organization. “We wanted to build a safari company with locals on the ground in Tanzania,” Wineland recalls. “A company dedicated to sustainable practices, cultural enrichment, and a peerless drive for quality adventuring.”

As of now, Wineland currently co-owns and operates three tour companies: AdventureWomen; Thomson Safaris, the leading safari operator in Tanzania, which has been programming travel to the country since 1981; and Thomson Family Adventures, which she created in 1998, becoming the first U.S. operator devoted exclusively to family travel. (Both of the latter businesses have been cited in Travel + Leisure’s World Best Awards, and Wineland has appeared on Condé Nast Traveler’s “Women Who Travel” power list.)

Moving beyond tourism, in 1997 Wineland cofounded Focus on Tanzanian Communities (FOTZC), an organization that has invested over $3 million in classrooms and teachers’ housing, women’s entrepreneurship programs, boreholes to provide clean water, and a vital medical facility in Tanzania. She and her husband also own the Eastern Serengeti Nature Refuge, a 10,000-acre grassland that was privately purchased in an effort to help protect the region’s wildlife. Within the refuge’s first three years, wildlife populations more than doubled there. The refuge was established to protect the local environment as well—including one of the last remaining pencil cedar forests—while fostering employment and educational opportunities in the surrounding communities.

Wineland discovered AdventureWomen through the company’s original founder, Susan Eckert. “She and I were two of the first pioneers as women in the adventure travel industry, which was dominated by men back in the ’60s and ’70s,” Wineland recalls. During the spring of 2016, Eckert called Wineland to inform her she was retiring and also looking for a partner to pick up the baton at AdventureWomen. “I immediately turned to my two daughters, who turned all smiles at the prospect—and honor—of taking on the legacy of this iconic brand,” Wineland says. “And the rest is history.”

“We purchased AdventureWomen because the brand represents the best in women-only adventure travel,” Wineland says. “Early on, Susan differentiated the company around the quality of the experience—from the itineraries to the guides, from accommodations to cuisine—everything mattered.”

In acquiring this beloved brand, the Wineland trio felt the weight of carrying on its legacy. But they also wanted to push the company forward, just as guests have to push themselves to gain fulfillment on its adventures. “We knew we could take the company to new heights,” Landerson says.

AdventureWomen added an advisory board of long-term clients with the purpose of staying close to its customers; it launched a program for brand ambassadors, training them to accompany travelers; it initiated an annual survey of women travelers to keep a pulse on what women want in an adventure travel experience; and of course, it expanded the company’s social media presence.

“We want our women to challenge themselves and get outside their comfort zones, all while providing opportunities for increased confidence, camaraderie, and connection,” Wineland-Thomson says. “We want to give them access to exclusive cultural insights and opportunities to meet other women who are community leaders, homemakers, and entrepreneurs.”

As of 2019, AdventureWomen is running 30 to 35 tours annually, with the goal of adding at least five a year, every year. The process of brainstorming and planning new tours is a collaborative effort, based on annual market research, customer feedback, and the team’s own ideas. They then draft an initial list of 10 potential new countries. After researching each location, AdventureWomen reaches out to local experts to learn more about the kinds of experiences women can expect and then develops a daily itinerary. The team then votes and condenses the list to five additional countries.

In 2020, AdventureWomen will be adding tours to Oman, Ladakh (India), Thailand and Laos, Uganda, and the Dolomites in Italy. After launching mother-daughter tours in 2018, the company is adding its first mother-daughter trip to Costa Rica next year. Wineland-Thomson says 2020 bookings are already well ahead of 2019’s so far, and the list of 2021 trips should be out soon.

Surfing along the Baja Peninsula in Mexico.
AdventureWomen

“I think I was successful because I was unwavering in my focus and believed in myself. I believed that I could do anything I set out to,” Wineland says. “This overarching, positive outlook enabled me to get over many hurdles and bumps along the way as the business grew. I didn’t care that there were no other women in the adventure travel space as we know it today or that I was pioneering new territory. I just knew there were other people out there like me who would embrace opportunities to go explore the world, and my mission was to go out and find them.”