The Systems That Protected Epstein and Weinstein: The Broadsheet 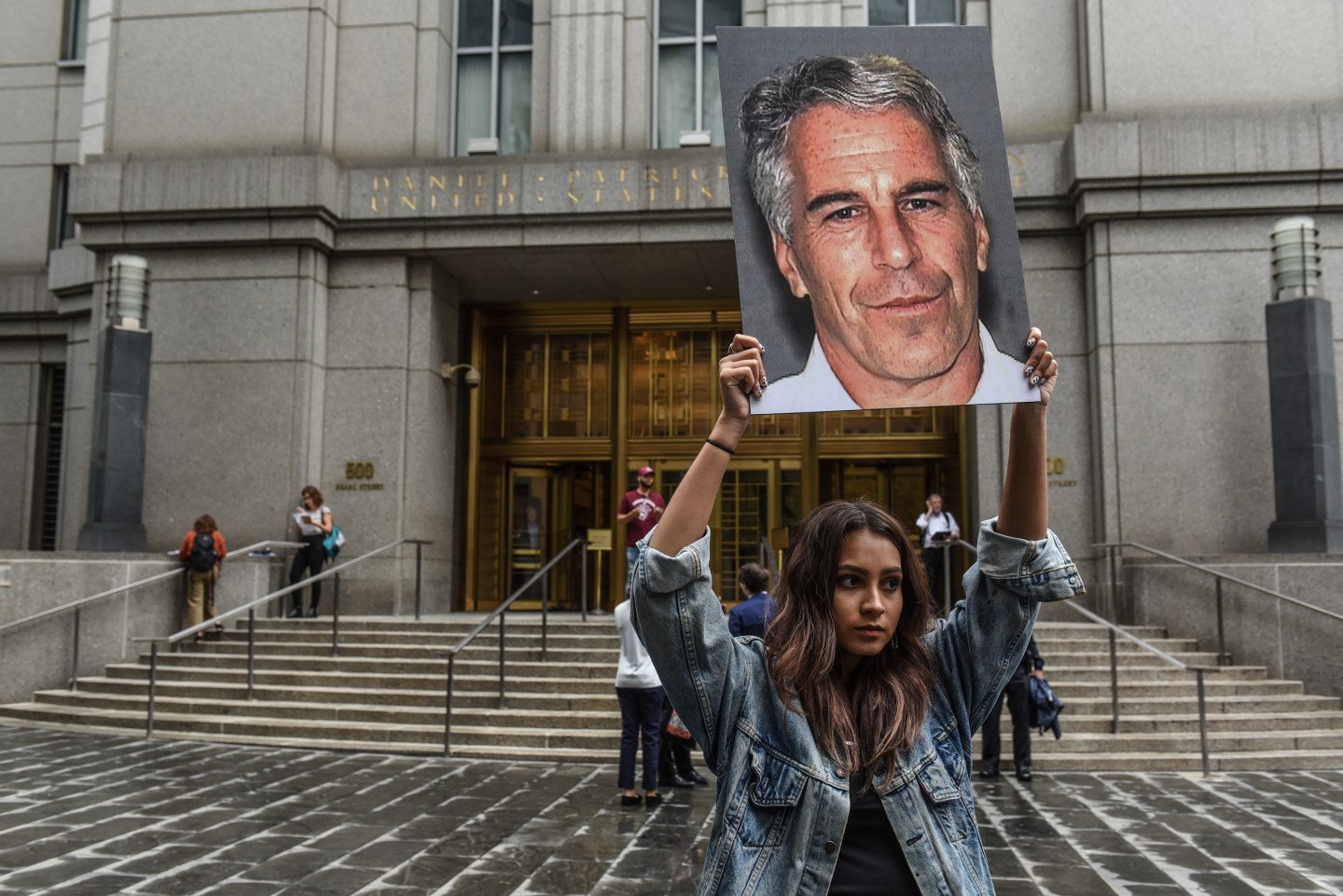 NEW YORK, NY - JULY 08: A protest group called "Hot Mess" hold up signs of Jeffrey Epstein in front of the federal courthouse on July 8, 2019 in New York City. According to reports, Epstein will be charged with one count of sex trafficking of minors and one count of conspiracy to engage in sex trafficking of minors. (Photo by Stephanie Keith/Getty Images)
Stephanie Keith—Getty Images

- Epstein and Weinstein. New reporting on Jeffrey Epstein and Harvey Weinstein this weekend shed light on how, for both alleged predators, networks of those who benefitted from their wealth prevented their abuse from coming to light—and how whistleblowers within those networks eventually put an end to it.

The story about Jeffrey Epstein has to do with the Massachusetts Institute of Technology's Media Lab. The research lab has already faced scrutiny for donations it received from Epstein and for director Joichi Ito's relationship with the man who was convicted of soliciting prostitution from underage girls and registered as a sex offender more than a decade ago. A New Yorker story by Ronan Farrow published Friday revealed how the MIT Media Lab had a closer relationship with Epstein than it acknowledged over the past several weeks, and how it worked to cover up those ties. Ito resigned on Saturday.

Meetings with Epstein were marked as "J.E." on Ito's calendar to avoid scrutiny. Donations were given as "anonymous" to get around MIT's labeling of Epstein as a "disqualified" donor. Ito directly asked Epstein for more money as recently as 2014. Epstein solicited donations for the lab from Bill Gates and other prominent friends, and the lab covered up his connections to that money too.

The news about Weinstein is from She Said: Breaking the Sexual Harassment Story That Helped Ignite a Movement, the book by The New York Times' Jodi Kantor and Megan Twohey about reporting the Weinstein story in 2017. Their book, out Tuesday, includes new information: the story of Rowena Chiu, a former assistant at Miramax who received a settlement in 1998, a letter Bob Weinstein wrote to his brother and business parter before the story urging him to seek treatment for his behavior, and the details of how mother-daughter victims' rights attorneys Gloria Allred and Lisa Bloom both benefitted from representing Weinstein and, in Bloom's case, sought to discredit accusers. (Allred is currently representing some of Epstein's victims, as is David Boies, whose long relationship with Weinstein is also outlined.)

The key figure in bringing to light the ethical lapses at the MIT Media Lab was Signe Swenson, a former development associate and alumni coordinator. She describes the compromising and heartbreaking experience of being caught in the middle of what she knew was an immoral situation. It came to a head after Epstein visited the MIT Media Lab offices with two "assistants"—"models, Eastern European"—whom Swenson and other women working in the lab tried to figure out how to protect. "We literally had a conversation about how, on the off chance that they’re not there by choice, we could maybe help them," Swenson said.

At the Weinstein Company, the whistleblower who helped with the original Times story, the book reveals, was Irwin Reiter, an accountant who grew concerned about Weinstein's behavior with women and unsuccessfully tried to address the problem within the company.

If you haven't yet, it's worth reading both these stories (and, I imagine, the new book) to process how systems protected these two men. Donations to a university might not seem that important given the level of alleged abuse in Epstein's world, but Epstein's association with the MIT Media Lab and other institutions provided a prestige that helped him elude consequences for so long.

The Times' review of She Said makes a similar point; writes Susan Faludi, "Kantor and Twohey instinctively understand the dangers of the Harvey-as-Monster story line—and the importance of refocusing our attention on structures of power."

- Go, Canada. Serena Williams fell short of tying for a record 24 Grand Slam singles titles at the U.S. Open on Saturday, losing the women’s final to 19-year-old Bianca Andreescu. But history was still made: Andreescu became the first Canadian, man or woman, to ever win a Grand Slam. Williams called the match her worst of the tournament; "I believe I could have just been more Serena today," she said afterward. New York Times

- Fashion show. Kristen called up Succession costume designer Michelle Matland to talk about the cutthroat corporate fashion on the media drama. From Roy family heir Shiv’s power lob and leather staples—a corporate phenomenon Kristen also covered!—to Logan Roy lieutenant Gerri dressing like one of the boys, it’s a great read for fans of the show and all things workwear. Fortune

- When cases disappear. A Bloomberg analysis of a public database found that of 3,585 sex discrimination suits in the U.K. in the past two-and-a-half years, a whopping 2,195 were dropped before court rulings. The withdrawal of those suits implies settlements and confidentiality clauses or nondisclosure agreements. The withdrawn cases included suits against Barclays, HSBC, and JPMorgan Chase. Bloomberg

- Most innovative? A list of published by Forbes of the 100 Most Innovative Leaders caused uproar this weekend because just one of the 100 CEOs is female (Ross Stores chief executive Barbara Rentler). Forbes editor-in-chief Randall Lane issued a statement placing the blame on the list’s methodology, which privileged public companies worth $10 billion or more. Business Insider

- Lacking Soul? The boycott of SoulCycle—a protest of the fitness chain’s majority owner’s mega-fundraiser for President Trump—may actually be hitting the business’s bottom line. Consumer behavior data analytics firm Earnest Research found a decline of 12.8% in SoulCycle class attendance in the 18 days after the boycott began, measured via the studios’ publicly-available class sign-up information. When calls to abandon the cycling classes started, SoulCycle CEO Melanie Whelan said that the company has "nothing to do with the event and does not support it." The Atlantic

- Power player. Samantha Power, a foreign policy advisor to President Obama and former U.S. ambassador to the UN, has a new book coming out this week. The Education of an Idealist is part memoir, part treatise. Ahead of its publication, Power is talking about getting fired from Obama's 2008 presidential campaign after calling Hillary Clinton a "monster," spending time with her children in the post-Obama years (during talks on Russia sanctions, her son protested she wasn't paying attention: "Putin, Putin, Putin! When is it going to be Declan, Declan, Declan?"), and the administration decisions she regrets. Time

-True colors. Tate Britain is set to debut a sweeping exhibit of the work of late eighteenth and early nineteenth century poet and artist William Blake this week. While scholars have noted the artistic accomplishments of his wife Catherine Blake before, this exhibit will take the unusual approach of pointing out her contributions to his most famous works. Displays of his poetry—“Tyger, tyger burning bright”—will include a book cover designed and colored by Catherine, who worked at his side as a designer and printer. Guardian

This isn’t another horror story about black motherhood Washington Post

“Pressure is a privilege.”