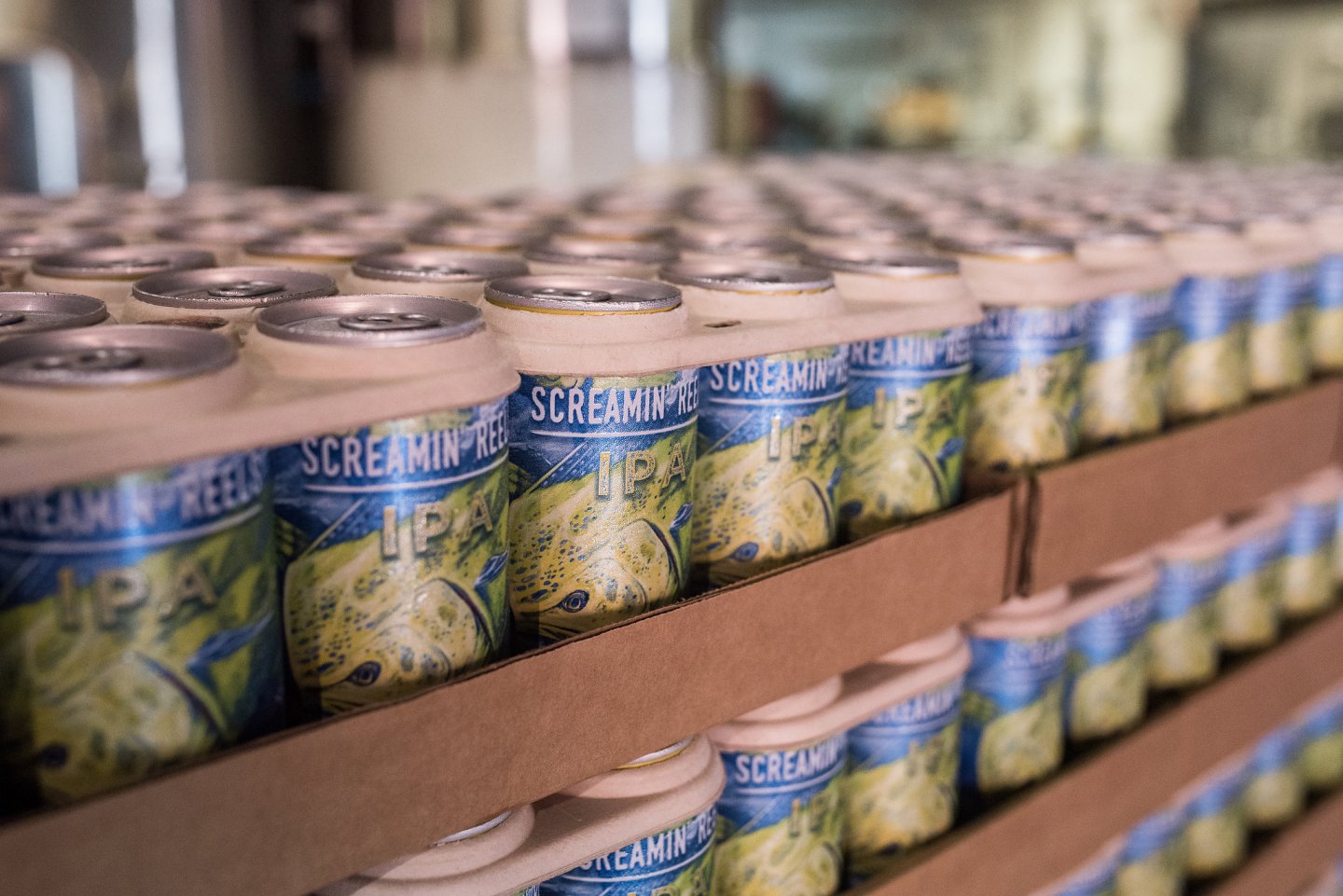 It might soon be the last straw for six-pack plastic beer rings.

Many of the world’s largest brewers—including Anheuser-Busch InBev, Molson Coors, and Carlsberg—are tinkering with new technologies to replace single-use, plastic six-pack beer rings with more sustainable materials. Though mostly being used in small test trials, full adoption could have a positive environmental impact. Carlsberg, for example, is using glue to adhere cans in a production method that the Danish brewer says would avoid using 1,200 tons of plastic annually, or the equivalent of 60 million plastic bags, once fully adopted.

Brewers have zeroed in on six-pack-ring packaging partly because most consumers can recall the haunting image of a seagull, turtle, or some other aquatic creature constrained or killed by the plastic rings. The packaging is so ingrained in our culture that many children were taught to cut up the rings to lessen the chance that an animal might strangle itself.

The flurry surrounding these rings is reminiscent of how restaurant chains, cities, and states have moved to restrict or completely ban plastic straws.

“Is the six-pack ring the biggest issue in the ocean causing the biggest problem? No,” says Dustin Jeffers, cofounder and head of operations for SaltWater Brewery. “But it is something that people interact with every day, and they are a problem.”

The Delray Beach, Fla., craft brewer—cofounded by beach lovers and offering oceanic-themed beers such as the Salty Flamingo and the Sea Cow—was an early adopter of the technology. SaltWater Brewery has been working with E6PR to make the first eco-friendly six-pack ring made from by-product waste and other compostable materials. It took about 18 months for the sustainable packaging to be fully adopted throughout all of SaltWater’s distribution network.

The rings developed by E6PR are now used by 35 brewers across the globe, including in Africa, Europe, and Australia. The ultimate goal is to ensure that the rings can break down in nature within a matter of months rather than the years it would take for plastic.

But the technology also had to perform on par with, if not better than, plastic on shelves. If a customer were to drop a can from a plastic container, no harm, no foul. “But if it happens to our biodegradable packaging, they will grill us,” says Jorge Reynoso, CEO and cofounder of E6PR. “You need to do something better.”

The industry has yet to settle on a single supplier or format that could fully replace plastic six-pack rings. Last year, Corona became the first major global beer brand to pilot E6PR’s technology, while rival Molson Coors commissioned manufacturer Footprint to make compostable, biodegradable rings for a small test run of the craft brand AC Golden in Colorado. Carlsberg is working with German supplier NMP Systems GmbH. Formats, meanwhile, include biodegradable rings, glue, and even Corona’s interlocking cans that can screw into each other.

Ditching plastic straws and beer rings may help consumers feel better about their carbon footprint, but some experts say we should focus on other efforts. Recycling rates in the U.S. stand at just over 34%. Glass, in which many brewers bottle their beer, can be difficult to recycle and bulky to transport. If brewers were to focus on using thinner glass, some experts say, the innovation could prove even more beneficial to the environment than ditching plastic rings.

There’s also the risk that if consumers think their six-pack rings are easily compostable, they’ll be more likely to litter. “The idea of creating something that’s litter-friendly, that’s an issue in my mind,” says Nina Goodrich, executive director of environmental nonprofit GreenBlue. “What we need in North America is a better system to incentivize collection and sortation.”

Still, brewers should be commended for their lofty goals. Carlsberg is tinkering with the inks on labels to improve recyclability, using recycled materials in wrapping where plastic is needed and ending coal use at nine breweries in China as it aims for zero carbon dioxide emissions.

In August, Molson Coors vowed it would aim for all its packaging to be reusable, recyclable, compostable, or biodegradable by 2025. The Coors Light and Miller Lite brewer says an increased focus on finding sustainable packaging solutions is coming from all sides: consumers, retailers, and investors.

Global brewers like Molson Coors and Carlsberg have to tailor different solutions for a variety of markets because beer isn’t always packaged the same way. And in some markets, like the U.K., pressure is heightened to find solutions quickly. Molson Coors is currently removing plastic rings from Carling and Coors Light cans in the U.K. and Ireland, with the switch to 100% recyclable cardboard sleeves expected to occur by 2021.

“As a consumer products company, you need to continue to test, learn, and meet the needs of what was previously delivered, but make it sustainable,” says Kim Marotta, Molson Coors’s global senior director of corporate responsibility and alcohol policy.

—Australia’s new wave of winemakers won’t make Shiraz
—How fruit wines are becoming serious business
—How to drink—and enjoy—red wine in the summer
—What I learned in inclusion training at the world’s top cocktail festival
—Tap these bottles of wine with your phone to learn more about their makeup
Follow Fortune on Flipboard to stay up-to-date on the latest news and analysis.