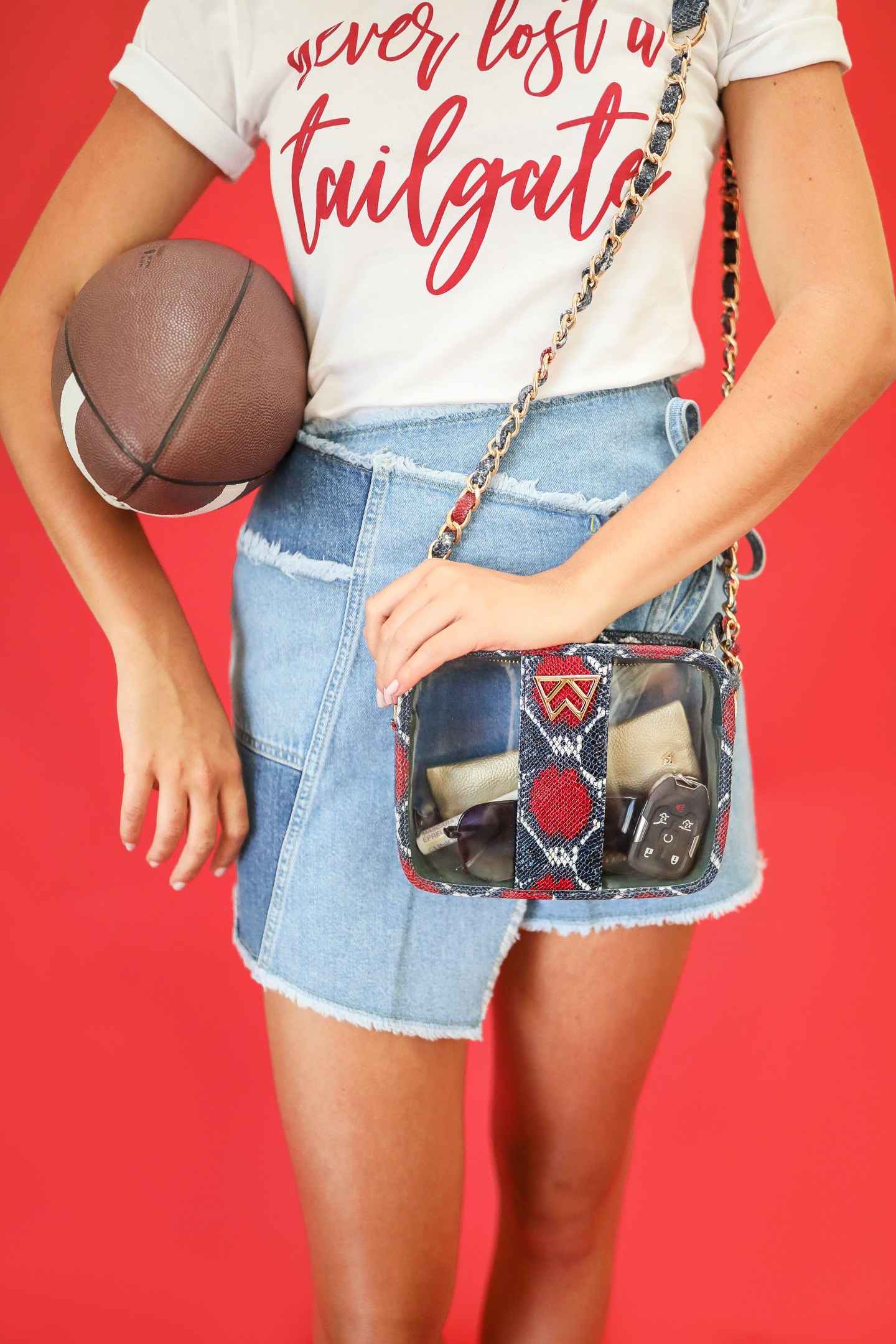 What does she keep in that thing?

That particular question has been a source of mystery surrounding women’s purses for decades. But now fashion trends—and the National Football League—are making it completely, well, clear.

In 2013, the NFL announced an update to its bag policy, what you could and could not bring into a stadium on game day, and has continued to fine-tune that policy each year. As it stands, the only bag an average attendee at any NFL football game can bring in is a small clutch, the size of one’s hand, or a clear bag. The “All Clear” policy was a game changer.

College football, which is the trickle-down recipient of many NFL policies, followed suit with the majority of the Big Ten and Pac 12 schools adopting the same clear bag policy in 2016. When handbag designer Kelly Wynne, who’s based in Austin, heard the rumblings that the SEC would surely adopt the same policy and soon, her first thought was less for her eponymous purse line, but as a diehard Ole Miss alum and fan. “This is really going to cramp my style,” she said, explaining that Southern female fans care deeply about their appearance in the stands. “We dress up to go to these football games.”

Wynne’s leather bags were already popular with women in the Southeast, and as they showed up regularly on Instagram post with hashtags devoted to game day outfits, it was fairly obvious what she needed to do.

The designer and her team kicked into high gear, condensing what is normally an 18-month process into six months, so that when the SEC did, in fact, announce its own clear bag policy in 2017, Kelly Wynne brought to market that July a clear bag based on the design of their best-selling leather purse. As a small batch business, Ann Elize Allen, the director of operations and production, was concerned the first order was too big, but they were sold out within a month and had a 50% increase in sales growth by the end of that year. Now the company offers six different clear bags, which account for roughly 50% of total revenue, and their order this year is five times the volume of their first order, “and we are still wondering if we ordered enough,” Allen said.

Other companies such as Hammitt, Truffle Co. and Loeffler Randall have also debuted fashion-forward (and stadium compliant) bags in recent years. Stadium operators, for their part, care far less if a fan is carrying a sleek clear crossbody, adorned with tassels in the team’s colors, or a Ziploc gallon bag. So long as its no bigger than 12 x 6 x 12 inches.

When the San Francisco 49ers played their first preseason game in August 2014 in the newly opened Levi’s Stadium in Santa Clara, CA, the team had been working for over a year to communicate to its season ticket holders and fans about the policy. Jim Mercurio, the team’s stadium general manager, who also sits on the NFL’s committee for stadium security, said the 49ers spent the first season flooding the zone, as it were, with radio and TV spots, signage that extended to the farthest reaches of the parking lot, prominent printing on the tickets, all to alert game-goers about the policy. Each year, the 49ers continue to advertise the policy as much as possible, the goal being that every person who comes to a game knows about the clear bag policy before they arrive and has planned accordingly. The efforts have paid off. “We are tracking very, very well for how long it takes to get into the facility,” Mercurio said, noting that Levi’s processes 30,000 people into the stadium in the final 30 minutes before kick-off.

A few miles up the road in Palo Alto, the majority of college football fans have accepted the new reality of attending large public events, but each year still brings indefatigable outliers, who want to debate the policy, the size of their bag, or to simply register their outrage. “It’s been a real adventure,” laughs Chris Dorst, director of guest services at Stanford. The university viewed the NFL as its roadmap when instituting the policy in 2016. “The expectation with each passing year is [the fans] will be more familiar and comfortable with the clear bag policy,” Dorst said. “We are happy with the way things have gone.”

But even beyond the world of sports, clear bags seem to be having a moment. Today’s Harajuku influencer or Shoreditch-based blogger might be rather surprised to find that they share an accessory with someone chanting, “Roll Tide!” “Clear bags are making a comeback from the ‘90s as a part of the nostalgia movement,” Avery Faigen, a retail analyst at EDITED, which tracks retail data, said. “Similar to the fanny pack comeback, clear bags would currently be classified as a micro-trend that’s seen mostly in streetwear.” Indeed, luxury designers like Balenciaga, Michael Kors, Chanel and Staud have all put out transparent bags in the last two years. According to EDITED data, clear handbag arrivals have increased by 235% over the last year, and their popularity is allowing retailers to increase prices.

Faigen said, however, that the Fall 2019 and pre-Spring 2020 runway shows were filled not with PVC, but quilted and animal-skinned bags. “Only time will tell if clear bags will follow the same success as the fanny pack,” she said.

But for the game-day crowd, the clear look seems here to stay. Last year, Kelly Wynne bags, which previously had an almost exclusively Southern customer base, launched online at Nordstrom and has since seen a major expansion in the geographic reach of its orders, particularly California. “I never in a million years thought I would be known for clear bags,” the designer said.