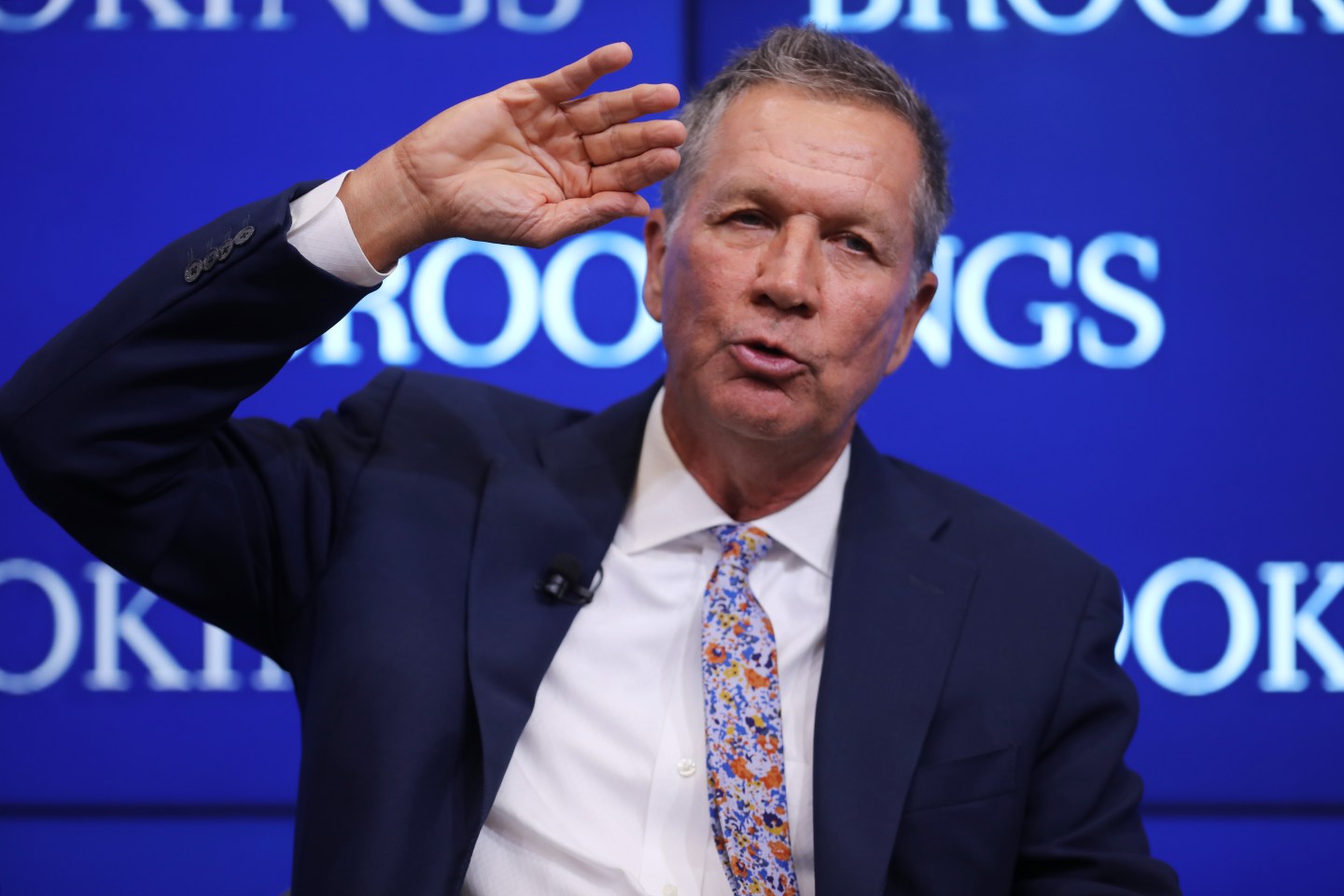 WASHINGTON, DC - OCTOBER 10: Ohio Gov. John Kasich participates in a discussion as part of the Brookings Institution's Middle Class Initiative October 10, 2018 in Washington, DC. Kasich, a Republican, and Colorado Gov. John Hickenlooper, a Democrat, participated in the discussion and found common ground on issues related to the economy, trade, education and other areas. Both governors are seen as potential 2020 presidential candidates. (Photo by Chip Somodevilla/Getty Images)
Chip Somodevilla—Getty Images

For John Kasich, the third time won’t be the charm.

The former Ohio governor, who sought the presidency in 2000 and 2016, said Wednesday that he won’t seek to challenge Donald Trump for the Republican nomination in 2020.

“I look at this and I don’t see the path right now,” he said on CNN’s “Anderson Cooper 360.” “That doesn’t mean there wouldn’t be a path down the road, but right now I don’t see it.”

Kasich, a prominent Trump critic and CNN commentator, said on Bloomberg TV in December that “all options are on the table” for 2020.

Monmouth University’s Patrick Murray acknowledged Wednesday that his poll was an outlier, after other surveys didn’t show a similar fundamental shake-up in the presidential race.

Two polls released Wednesday, from Quinnipiac University and USA Today/Suffolk University, had Biden up by 18 points and 13 points, respectively.

Murray explained the problem this way: Those margin-of-error numbers attached to each poll — in this case, 5.7 percentage points — are only 95% accurate. That means one poll in 20 will be outside of its margin of error.

Or in other words, an outlier.

“It occurs very infrequently, but every pollster who has been in this business a while recognizes that outliers happen,” he said. His advice: Always look at more than one poll before jumping to any conclusions. — Gregory Korte

Democratic front-runner Joe Biden has slightly expanded his lead over President Donald Trump in the latest Quinnipiac University poll, which also for the first time in Trump’s presidency registered more voters saying the U.S. economy is getting worse rather than better.

On the economy, 37% of voters said conditions were worsening, with just 31% saying the situation is getting better — a troubling sign for Trump, who has made taking credit for a strong economy a centerpiece of his campaign messaging.

The poll appears unlikely to help any other Democratic candidates qualify for the next round of candidates debates in Houston in September. Wednesday is the deadline to meet the debate criteria of having 130,000 donors and polling at least 2% in four qualifying polls.

About half of the current field is yet to qualify, even accounting for the three recent dropouts: John Hickenlooper, Jay Inslee and Seth Moulton. If one more candidate hits the threshold, the event will be held over two nights, with slots randomly assigned. Billionaire investor Tom Steyer looks to have the best chance to get in but failed to top 1% in this latest poll.

Climate change takes center stage on Sept. 4, even if the Democratic National Committee rejected pleas from climate activists for a party-sponsored debate solely on that subject. CNN hosts a town hall on the issue just after Labor Day.

—Will gaffes hurt Biden’s chances of a 2020 win? Strategists are divided
—These are the 2020 senate races to watch
—What is BDS? Boycott, Divestment, and Sanctions explained
—When does Congress reconvene? August recess, explained
—Trump thinks he is winning the trade war, but the data tell a different story
Get up to speed on your morning commute with Fortune’s CEO Daily newsletter.