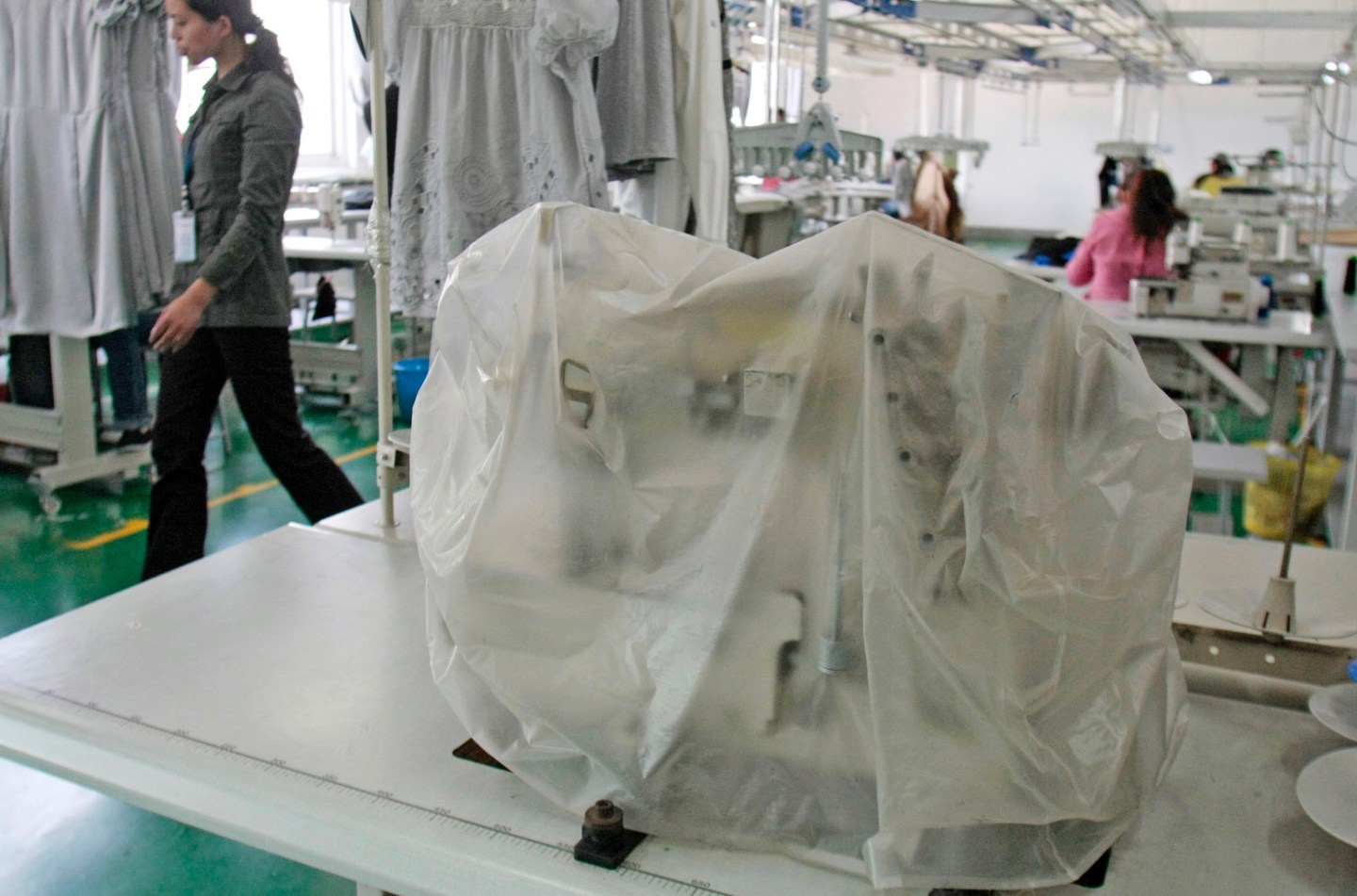 A quarter of the Chinese production capacity used by global sportswear brands is lying idle, according to an industry executive, as the trade war pushes the biggest labels out of the Asian nation’s factories.

The exodus is forcing plants to offer discounts of 10% to local companies like Xtep International Holdings Ltd., Chairman Ding Shui Po, said in an interview with Bloomberg in Hong Kong. The sportswear label, based in the southern province of Fujian, is one of a handful of Chinese brands competing with the likes of Nike Inc. and Adidas AG.

“Factories are under pretty massive pressure,” Ding said. “With Trump’s policy, these international brands are shifting sourcing overseas, which results in unoccupied production capacity,” he said, referring to President Donald Trump’s campaign of levying tariffs on Chinese-made imports into the U.S. in order to force policy concessions from Beijing.

The Trump-mandated tariffs amount to taxes that are paid by U.S. companies on Chinese-made goods. American businesses, in turn, either have to absorb the extra costs or pass them along to consumers in the form of higher prices.

Idle capacity in a country that’s long been the workshop to the world underscores the blow of the trade war to Chinese manufacturers, who are also grappling with an economy that’s expanding at its slowest pace in three decades. There are growing signs that the global supply chain that’s been in place for decades—and powered by China’s economic rise—is being permanently transformed.

The pivot away from China by global firms from Microsoft Corp. to bike maker Giant Manufacturing Co., is ongoing and accelerating as the trade war heats up. Trump in a series of tweets Friday “ordered” American companies to seek alternatives to business in China, including moving operations “home and making your products in the USA.”

The world’s largest supplier of consumer goods, Li & Fung Ltd., said in an earnings statement on Thursday that it’s actively helping its clients—which include some of the biggest retailers in the world—move sourcing away from China to other regions. It helped one American retailer to reduce its reliance on China from to 20% from 70% within two years.

For just apparel, China comprises 41.6% of all imports into the United States, according to the U.S. Commerce Department’s Office of Textiles and Apparel. This accounts for a huge amount of the clothing sold in the U.S., with retailers dependent on selling fashion imports since few such products are still made in America.

There doesn’t seem to be an end in sight for the U.S.-China trade war, which is also pinching U.S. companies exporting to China, the world’s largest consumer market. They are being hit by retaliatory tariffs China has levied on American products.

Selling to China’s consumers instead

For China’s $4.7 billion industry in sportswear exports, the growing local market can partially make up for waning foreign demand, said Ding. “By shifting to made-in-China and sold-in-China, factories shorten production cycles and that could be good for them,” he said.

It plans to expand production of its international brands in China—taking advantage of manufacturers’ lowered prices. “We can produce in these Chinese factories and that’s how we have an advantage,” Ding said.

Still, China’s $40 billion-a-year market for sports apparel is less than half of the market in the U.S., according to data from Euromonitor International. Most Chinese consumers also aspire to athleisure from global labels like Nike, Adidas, and Under Armour.

Ding said this may change with time. “The gap between domestic brands and international brands will slowly be closed,” he said. Xtep—which has a market share of 4.6%, compared with 15% for local rival Anta Sports Products Ltd.—seeks to increase its retail sales five-fold to 50 billion yuan ($7.1 billion) in the next decade.

Ding expects younger Chinese consumers, especially those born after 1990, to have a greater affinity to local brands.

They “are confident about China’s rise and identify with national brands,” he said.