Letter From Pebble Beach: What a Disappointing Classic Car Auction Tells Us About the 1%—and the Economy 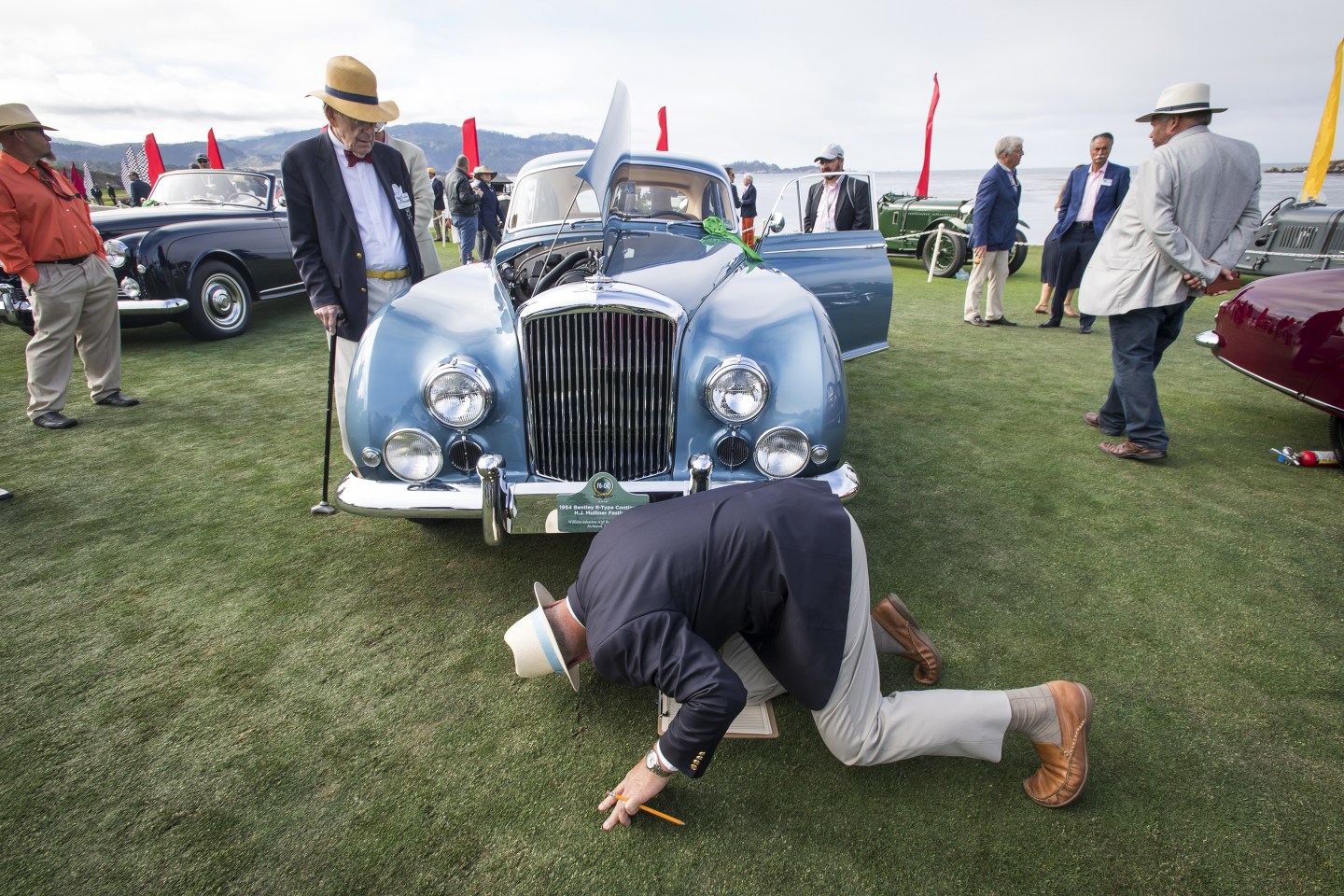 The top 1% is pumping the brakes.

Weak auction sales at this year’s Monterey Car Week is just the latest example of how spending at the top of the economic pyramid is shrinking. The total value of cars hammered last week came in at a paltry $245 million, a third less than last year, as many of the highest-priced cars went unsold. From high-end New York real estate, to fine art, to now, classic cars, the ultra-wealthy have curbed their profligate spending in a big way this year, sending asset prices tumbling across the board.

Every year in August, the Monterey Peninsula in northern California plays host to the largest gathering of classic car aficionados on the planet. The days are filled with high-end car shows and exclusive auctions, while the nights are reserved for private mansion parties and charity balls sponsored by top car brands like Bentley, Infinity, Ferrari, Lamborghini and Mercedes-Benz. Car crazed celebrities like Jay Leno and Ralph Lauren are regulars at the event, adding a bit of star power to an already exclusive mix of millionaires and billionaires from around the globe.

The week is built around the granddaddy of all car shows, The Pebble Beach Concours d’Elegance, now in its 69th year. While open to the general public, the $425 ticket price successfully excludes the hoi polloi from the gates of the famed golf resort. The outdoor event is part English garden party and part New England clam bake, with women in period dresses and flamboyant hats flanked by men in blazers and brightly colored pants. Champagne flows liberally as loudspeakers pump out classical music, adding an air of sophistication to an already high-brow affair.

While the event makes for some great people watching, the real stars of the show are the classic cars assembled at the 18thhole of the golf course near the lodge. This year, attendees saw 214 cars from all across the automotive spectrum competing for a flurry of awards. Those that win their particular class go on to compete for the coveted “Best of Show” award, presented with great fanfare at the end of the day. This year, that honor went to a beautifully restored 1931 Bentley Gurney Nutting Tourer owned by Hong Kong billionaire, Sir Michael David Kadoorie, chairman of the Hong Kong & Shanghai Hotels conglomerate, which includes the famed Peninsula hotel brand.

Showing a car at Pebble Beach has always been difficult but it has become almost impossible in recent years amid rising standards and skyrocketing values.  Not only does the car have to be rare and unique, it needs to look and drive as well, if not better, than it did when it first rolled off the production line. Restoring a car to meet the show’s ever-rising standards can take thousands of man hours, costing its owners anywhere from six to seven figures.

Gregory Haak, who showed off his deep purple 1935 Packard 1204 Super Eight Roadster spent a total of 2200 hours restoring his car with the help of an 88-year-old Packard expert.

“I applied three times to be here, if you can believe it” Mr. Haak told Fortune. “They only took me serious after the car took the top prize at another show last year. After that, they sent me an application.”

The car won the Zenith Prize last year, which is given by the Antique Automobile Club of America for best-restored collector car of the year. At Pebble Beach, though, the near flawless car didn’t even win its division, which was made up of just six other open top Packards.

But just presenting a car at Pebble Beach can pay dividends for its owners down the line. It not only increases a car’s prestige on the auto show circuit, it also dramatically increases its value on the auction block. As classic car values have skyrocketed over the last decade, the pressure to show and win at Pebble Beach has intensified greatly. For some, it has taken a bit of the fun out of the event.

“Everything is a bit too polished now,” Frans Van Haren, a major car collector from Holland, told Fortune. “There was a time that you would see a few totally unfinished cars, but there were none like that this year.”

This obsession with perfection has become far more profound in recent years as the classic car market has morphed from a niche hobby to a legitimate stand-alone asset class, with cars selling for tens of millions of dollars. As such, many classic car enthusiasts have found themselves priced out of the market in recent years by investment groups and speculators hoping to make a quick buck flipping the cars back into a hot market. This investment thesis was predicated on the view that both the market size as well as the value of these super cars would continue to rise indefinitely, which, of course, is never a great idea.

But looking back over the last 10 years, it’s easy to see why some investors felt this way. In 2008, the total value of cars sold by the five major auction houses during Monterey Car Week came in at around $138 million, according to company records. Goodings and Company, an auction house that specializes in selling the highest of high-end cars, sold 115 cars that year at an average selling price of $563,000. Amongst the cars it sold that year was a rare Bugatti Type 57C coupe, which, at $7.9 million, represented the highest price ever paid for a car at a US auction.

Fast forward to 2014, things had changed quite a bit. The total value of cars sold by the five major auction houses during Monterey Car Week that year came in at record-smashing $403 million, nearly three times what it was in 2008. Goodings and Co. had another banner year, selling 107 cars at an average selling price of nearly $1 million per car. But it was rival auction house Bonhams that took the top prize that year, selling a 1962 Ferrari 250 GTO Berlinetta for a record-shattering $38 million.

Looking at the market as a whole, from 2008 to 2018, classic car values jumped a whopping 288%, according to Knight Frank, the London-based real-estate giant, making it the fastest growing collectable market for the rich. For comparison, classic cars values grew five times faster than the fine art market, which “only” increased 55% during the same time period. Classic cars also bested collectible watches (+69%), stamps (+103%), jewelry (+138%), fine wine (+178%) and rare coins (+182%).

The only year that the classic car market slipped significantly was in 2009, at the height of the Global Financial Crisis. The total value of cars sold during Monterey Car Week that year came in at $122 million, representing a 12% decline from the 2008 auction, which took place a month before the collapse of Lehman Brothers.  But by 2010, the market had recovered mightily and never looked back – that is, until this past week. Despite a record number of cars hitting the auction block this year, the total value raised came in at a paltry $245 million, representing a 34% decrease from the previous year. Car experts are shaking their heads in disbelief with only 58% of the cars up for auction at Monterey this year actually selling. The rest failed to meet their reserves, which is the lowest price a buyer would accept at auction.

“The reserves are too damn high,” one major car collector, who didn’t wish to be identified, told Fortune. “I held the high bid on a lot of cars today but I didn’t win any of them because of these crazy reserves. I’m not going to bid against myself, so the car goes unsold.”

The high reserves weren’t the only prices that were off – so were the estimated price ranges published by the auction houses. Only a handful of cars sold at or near the lower price estimate with almost none selling at or above the high estimate. When a car was being auctioned without reserve, it wasn’t uncommon to see them sell for half or more below the low estimate. Again, this is quite unusual compared to the go-go times of the last decade when cars regularly blew past their reserves and sold for well above the high estimates.

Despite outperforming the other auction houses, Goodings and Co. still had a relatively rough night. While its sell-through rate was the strongest of the bunch at 76%, selling 106 out of the 139 cars, it was below the 84% rate it set last year and the 88% rate set back in 2014. In all, the company’s cumulative sales total was $73 million this year, which was off mightily from the $116 million it sold back in 2018. To be fair, last year the auction house sold a $22 million Duesenberg, which was the highest price ever paid for an American car at auction, but even if you strip that lot out of the equation, the company still suffered a 22% drop in sales. Lastly, the average sale price this year fell by a third, falling from $950,000 to $650,000 per lot as many of the million dollar plus cars went unsold due to high reserves.

Bonhams, which was recently acquired by a private equity firm, decided to shake things up a bit this year, offering a larger quantity of cars at lower price points. In all, the company auctioned a whopping 220 cars, almost double what it offered last year. Unfortunately, the strategy didn’t translate to stronger sales, which fell 22% over last year to $29.6 million. The average sale price dropped from $364,000 to $184,000 per lot, which is understandable given its decision to go down market.

The results of these two auctions show that the classic car market is correcting, impacting both rare and super rare vehicles alike. Part of the 34% sales drop at Monterey can be attributed to things specifically related to the classic car market, such as the quality and quantity of cars available at the auctions, but certainly not all of it.

The rich are curbing spending

When you step back and look at the broader asset market, it is clear that the rich are curbing their spending for nearly everything. For example, sales at fine arts auctions are down 20% in the first half of 2019 compared with the same time last year, according to artprice.com. Housing prices in London fell 4.4% in May compared to the previous year, marking the lowest annual drop since August 2009 at the height of the Global Financial Crisis, according to the UK Office of National Statistics. Prices for high-end Manhattan real-estate fell 5% in the second quarter of 2019 compared with the same time last year, with sellers offering their largest discounts in nine years, according to Brown Harris Stevens, a real-estate firm.

Speculation as to why asset prices are falling range from President Trump’s trade wars to economic softness in China. Whatever the reason, it is clear that a there is a retraction in spending for almost everything and that this skittishness could be disastrous to the broader economy if it continues for much longer. To be sure, the rich still have the means to step up and buy whatever they want but they aren’t going to do so until prices stabilize. No one wants to be that sucker who paid through the nose for something, no matter how rich they may be.

Classic cars will continue to be a desirable asset class for car fanatics, those who actually drive and show off their cars, but even they have their limits. It is unclear how much prices need to fall to get them to come back and start buying again.

“I can’t wait for the bargain hunting to start,” one auction goer told Fortune this week. “I just hope I’ll be around when it actually happens.”

—Where you should eat, visit, and stay on your trip to Copenhagen
—This tiny Caribbean island grows 44 types of mangoes
—Your next getaway: Tulum is out, this island is in
—New Zealand’s hottest destination is one you’ve never heard of
—Listen to our audio briefing, Fortune 500 Daily
Follow Fortune on Flipboard to stay up-to-date on the latest news and analysis.