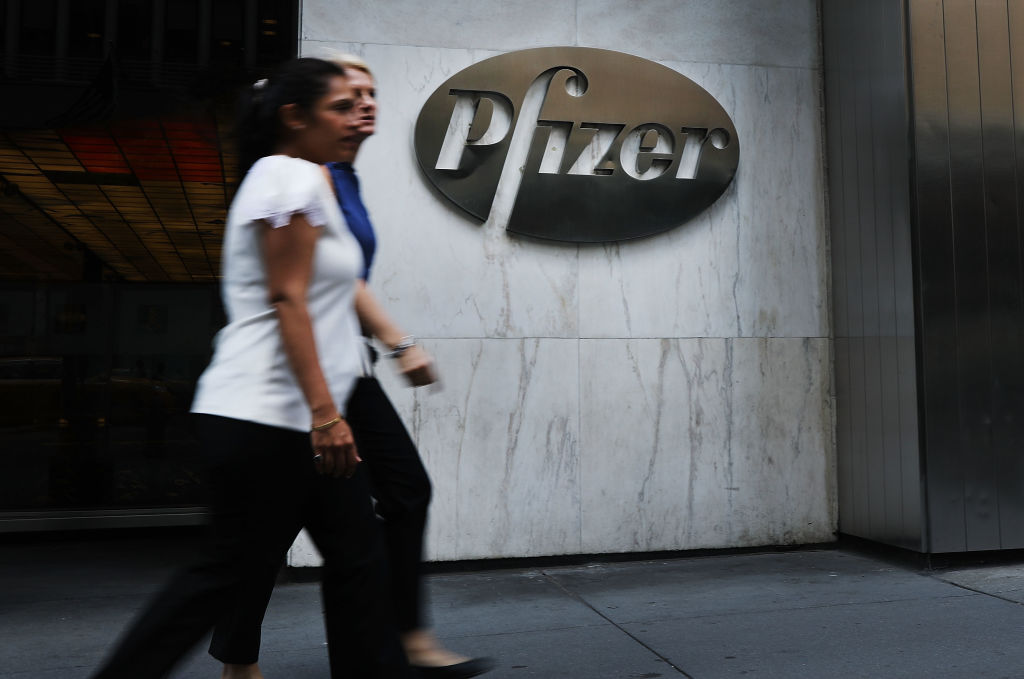 In an increasingly competitive space for generic drug sellers, pharmaceuticals firm Mylan plans to merge with Pfizer’s off-patent drug business—creating a giant with up to $20 billion in revenue next year.

On Monday, Mylan agreed to combine with Pfizer’s Upjohn in an all-stock deal. Mylan investors are expected to receive 43% of the combined firm, while Pfizer investors will own the remainder. Pfizer is also expected to issue $12 billion in new debt for the deal.

Shares of EpiPen producer Mylan rose 13.4% Monday to $21 apiece in pre-market trading, though the stock is still 75% below its peak in 2015 partially due to the pressure of lower drug prices from its competitors.

The deal makes sense for Pfizer (which makes Viagra), which has sought to focus on blockbuster, patent-protected drugs in recent years to boost growth amid shareholder pressure.

“For Pfizer, this transaction represents our sharpened focus on innovative medicines,” said Pfizer CEO Albert Bourla in a statement.

Beyond lower generic drug prices, Mylan has suffered from reputational setbacks in recent years. In 2016, Mylan was heavily criticized for the increased price of allergy-reaction injectable, EpiPen, a recent shortage of the product, as well as allegations of price-fixing.

Mylan CEO Heather Bresch is expected to retire in mid-2020, with Upjohn’s chief Michael Goettler taking over as the combined company’s CEO.

The Federal Reserve is widely expected to cut rates for the first time since the Financial Crisis Wednesday from 2.25%-2.50% to 2.00%-2.25% at a time when the figure remains at a historical low in a seemingly healthy economy.

That’s led to questions about why exactly the Fed is raising rates now.

Low inflation aside: “The Fed worries that the observed deterioration in the data in Europe and Asia will have a negative impact on the U.S. economy over the coming months,” writes Deutsche Bank’s Chief Economist Torsten Slok in a client note. “With ISM Manufacturing and NonFarm Payroll this week, we will soon find out if these Fed worries are justified.”

Inevitably though, the rate has also also raises concerns about what happens when a deeper downturn hits.

“By keeping interest rates so low for so long, the Federal Reserve is losing its best monetary tool for fighting the next recession, and implicitly undermining Congressional efforts to constrain spending and preserve fiscal firepower,” MIT Sloan School of Management Senior Lecturer Robert Pozen wrote in a commentary for Fortune.

-Autonomous Trains Are Ready to Roll

- Minut, a Swedish smart home security startup, raised $8m in Series A funding. KPN Ventures led the round, and was joined by investors including Centrica, Karma Ventures, SOSV, and Nordic Maker.

- Pyze, a Redwood City, Calif.-based provider of AI -based user analytics, raised $4.6 million in funding. Illuminate Ventures led the round and was joined by investors including Benhamou Global Ventures, and Correlation Ventures.

- Ethyca, a New York-based firm focused on managing user data in light of data privacy legislation, raised $4.2m in funding. Found Collective and IA Ventures led the round, and was joined by investors including Table Management, and Sinai Ventures.

- ProteinQure, a Toronto-based design platform for protein-based therapeutics, raised $4 million in funding. Felicis Ventures led the round, and was joined by investors including 8VC, Golden Ventures, iNovia, and Global Founders Capital.

- HGGC agreed to acquire Monotype Imaging Holdings, a Woburn, Mass.-based font creator, for $19.85 per share, or about $825 million.

- Ardian and Naxicap Partners are in exclusive talks to acquire a stake in Emera Group, a France-based provider of residential retirement homes in the country. Financial terms weren't disclosed.

-Wanda Sports Group, a Beijing-based sporting and live events firm spinning out of Dalian Wanda Group, raised $190 million in a downsized IPO of 23.8 million shares priced at $8 apiece. It booked revenue of $1.3 billion in 2018 and income of $61.9 million. It plans to list on the Nasdaq as “WSG.” Read more.

-AMTD International, a Hong Kong-based financial services firm and investment bank, plans to raise $172 million in an IPO of 20.8 million ADSs priced between $8.10 to $8.48. It posted revenue of $92.1 million in 2018 and profit of $66.9 million. AMTD Global Markets and Tiger Brokers are underwriters. Read more.

-Vista Oil & Gas, a Mexico City-based oil and gas firm, raised $93 million in an IPO of 10 million shares priced at $9.25. The firm posted revenue of $331.3 million between April 4 to December 2018, and loss of $29.1 million. Riverstone Holdings and Abu Dhabi Investment Council back the firm. It plans to list on the NYSE as “VIST.” Read more.

-InMode Limited, an Israeli maker of minimally-invasive medical aesthetic products, plans to raise $75 million in an IPO of 5 million shares priced between $14 to $16. It posted revenue of $85 million and income of $22.4 million in 2018. It plans to list on the Nasdaq as “INMD.” Read more.

- The London Stock Exchange is expected to acquire Refinitiv Holdings from a Blackstone Group-led consortium for roughly $15 billion. Read more.

- 3i Infrastructure agreed to acquire a stake in Ionisos, a French provider of cold sterilization services to the medical and pharmaceutical space, from Ardian. Financial terms weren't disclosed.