How Oatly Plans to Quench China’s Thirst for Milk 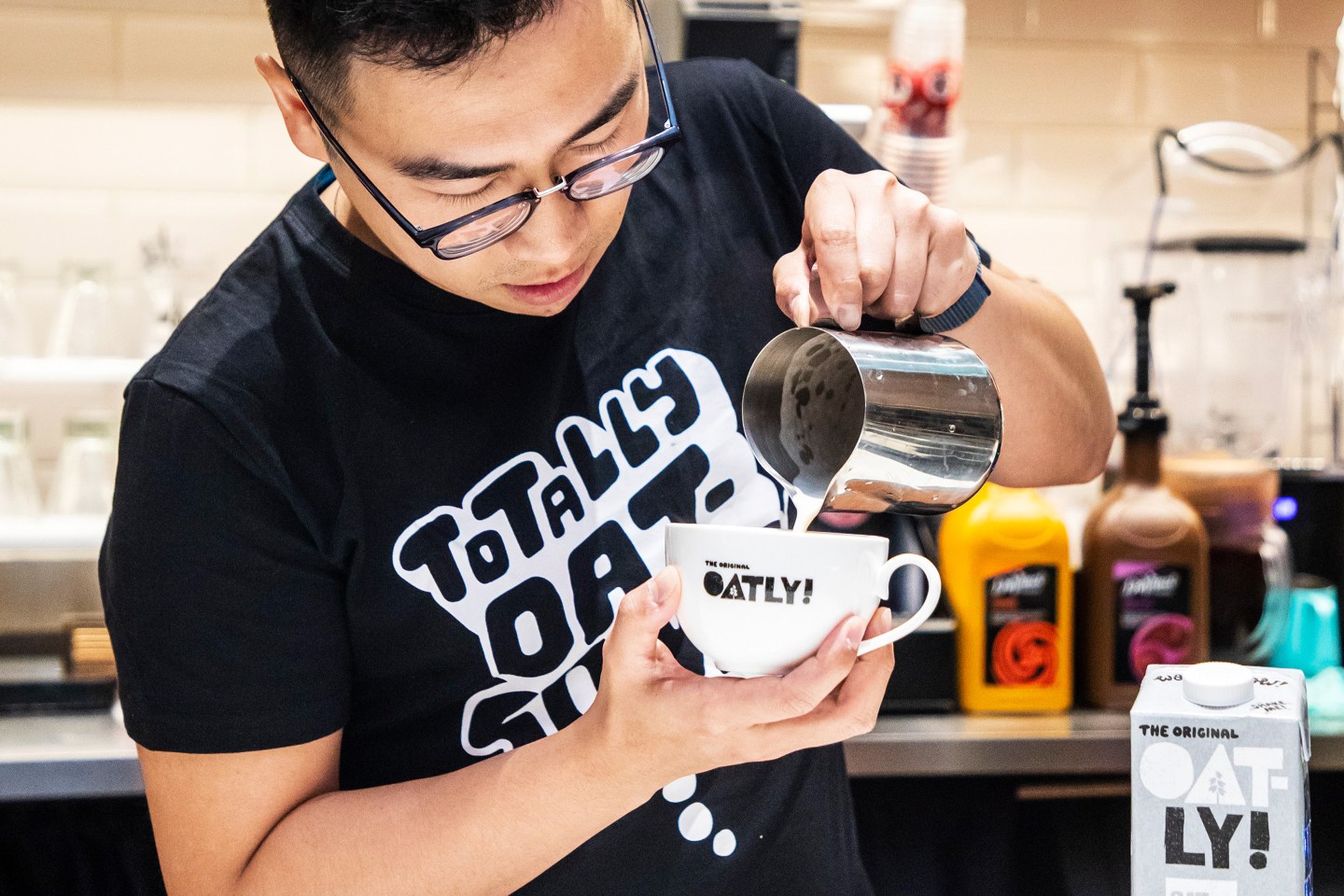 Niche barista joints are the preferred point of entry into foreign markets for Sweden’s Oatly.

In Hong Kong, its stylized cartons are an increasingly common sight in hipster “third wave” coffee shops. Oatly, which—as its name suggests—creates a milk-like product from milled oats, claims to have partnered with 80% of such coffeehouses in the city. Having already stormed into the southern port, Oatly is beginning an expansion north into mainland China, where a much larger market awaits.

“Some reports say the Chinese government wants to triple dairy consumption in China, and I think we could be very helpful in supporting that development,” says Oatly CEO Toni Petersson. With an office in Shanghai and sales through more than 2,200 Chinese coffee shops and retailers, the 25-year-old company has even coined a Chinese character—the symbol for grass atop the one for milk—to help control the narrative about plant-based milk.

That’s a clever move. EU regulations prevent the oat-drink manufacturer from calling Oatly “milk” in its home market. Dairy lobbyists are pushing for similar restrictions in the U.S. However, Petersson insists Oatly won’t trademark its new Chinese character but will keep it open-source to help encourage dialogue around dairy alternatives.

Dairy is an exploding business in China. Last year the retail value of its industry passed $61 billion, up from $27 billion 10 years ago, according to market research provider Euromonitor International. (The U.S. dairy market is at $65 billion but has declined in the past three years.) The increase is explained in part by Beijing’s recommendation in 2016 that citizens up their daily dairy intake from 100 grams to 300 grams. But it’s mostly a result of economic development.

One hurdle the Chinese dairy industry seems to have overcome is lactose intolerance. More than 90% of China’s population is deficient in lactase, the enzyme that breaks down the milk sugar lactose in the gut, per a 1984 study. But lactase activity increases as people add more dairy to their diet. In 1980s China, not many people were drinking milk.

“Once you see societies developing economically, the notion of lactose intolerance seems to become less of a problem,” says Hein Schu­macher, CEO of Netherlands-based dairy firm FrieslandCampina, which sells a number of dairy brands in China, including Hong Kong’s most popular infant formula, Friso.

Dairy sales certainly are rising as China’s economy grows, although data from Euromonitor International shows that low-lactose dairy—cheese, butter, and cream—are the fastest-growing segments. Also, sales to the food-service industry outstrip retail sales, suggesting that a significant portion of dairy is going into processed foods or drinks.

“Cheese tea,” which is warm sugary chai capped with a thick dairy froth similar to cream cheese, is a growing craze in China. FrieslandCampina has actually repurposed a cappuccino machine from its European market to sell as a cheese-tea machine in China. Schumacher suspects the novelty beverage could even catch on in the West. Maybe, maybe not, but China’s thirst for dairy will impact the rest of the world in another way.

Last year a report by Netherlands-based Wageningen University & Research found that satisfying China’s increasing demand for cow’s milk could increase global greenhouse-gas emissions from dairy production 35% by 2050. That spike is partly because China’s domestic dairy production is so inefficient—achieving roughly half the yield of the U.S. industry.

As part of its global sustainability initiative, FrieslandCampina works with Chinese farmers to help improve their efficiency. But as admirable as that initiative is, its efforts might be moot. Wageningen report coauthor Gerard Velthof says, “Even if the efficiency of the dairy industry in China is drastically increased, global emissions of greenhouse gases and nitrogen produced by this sector will still rise by 20% to 25%. The predicted increase in China’s demand for milk will have major global consequences, whatever the scenario.”

Here’s where Oatly considers itself a savior. “The strange thing about what we do is the more we sell, the better it is for everybody,” ­Petersson says, claiming Oatly’s carbon footprint is 80% smaller than the equivalent of dairy. (A 2018 Oxford University study found the global average for oat-milk production was 60% less emissions than those for dairy.) That’s a message that should resonate with China’s wealthy millennials and emergent Generation Z, who value products with environmental positioning—even if they will take their eco-friendly Oatly lattes in disposable cups.

Oatly plans to open a factory in Asia—one of three new plants globally—next year to help cover the region. “In three to five years,” Petersson says, “we think China is going to be really, really important for us.”

A version of this article appears in the August 2019 issue of Fortune with the headline “Milking Oats for China.”