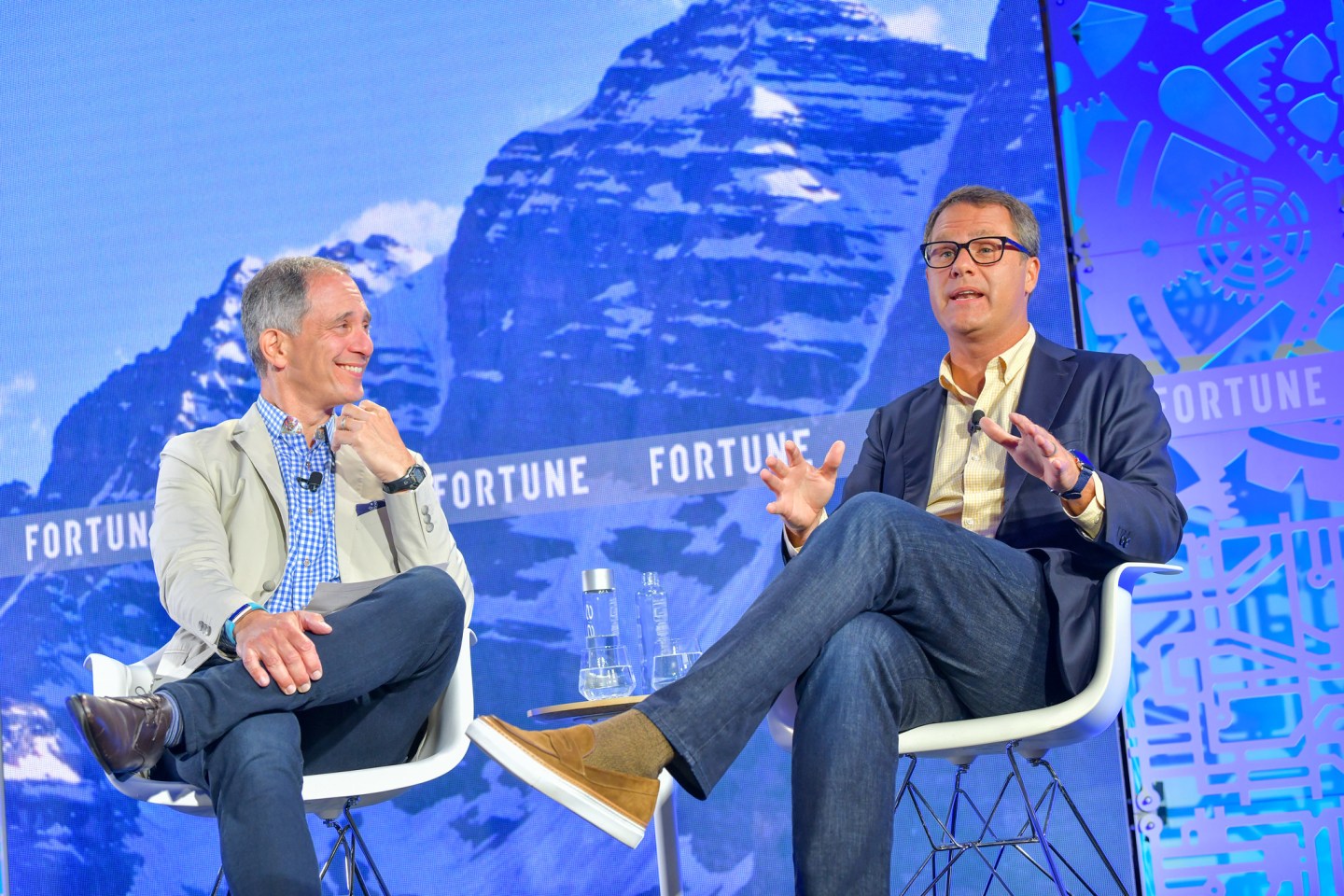 “There’s something different going on,” he said, explaining how white supremacist ideology has been nurtured by the social-media platforms, leading to real violence. As for the companies that host the filth that infects our society, “they haven’t done more because they don’t see it as their responsibility,” Greenblatt said. “These are businesses plain and simple,” he said, asserting that the Silicon Valley triad could kick off miscreants from their networks just as easily as Shake Shack or the registration desk at the St. Regis hotel, where the conference is underway in Aspen, Colo., would toss out a customer who said vile things in their establishments.

Greenblatt, a former tech entrepreneur who has run teams of engineers, offered five specific remedies the tech companies could follow:

It was a powerful talk, and I urge you to watch it.

Suffice it to say it was a good day. Most of the event is livestreamed on the web beginning at 9:15 a.m. Mountain time today.

What did I say. Along with Greenblatt's remarks, a lot of people noticed that President Trump tweeted something racist on Sunday, but Twitter did not label the tweet as violating the company's standards. "I have to wonder: What would it take? What would he have to say to fall within the scope of their policies?” Malkia Devich-Cyril, executive director of advocacy group MediaJustice, told The Washington Post.

Follow the money. Leading ride sharing service Uber released its annual diversity report on Monday, showing that the percentage of woman in leadership roles rose to 28% from 21% a year ago. Uber also tied the 2022 compensation of top execs, including CEO Dara Khosrowshahi, to meeting diversity and inclusion goals.

Follow the money, part two. Stock market investors should get a chance to invest in a few more well-known tech and tech-ish companies this year. Airbnb, iHeartMedia, and the company formerly known as WeWork (now called the We Company) are among the top candidates to go public soon, along with Peloton, Postmates, Robinhood, and Casper.

On the outside. Program manager Meredith Whittaker is leaving Google. One of the company's most vocal employees criticizing its policies, Whittaker helped organize last year's walkout of workers to protest the way Google handled sexual harassment complaints.

Antivirus. The rumored acquisition of cybersecurity firm Symantec by chipmaker Broadcom is now rumored to be dead. Shares of Symantec fell 11% on Monday.

Nabbed. App install advertising company Vungle is being acquired by private equity firm Blackstone for a reported price of $750 million. As part of the acquisition, Vungle and Blackstone reached a settlement in the wrongful dismissal lawsuit filed by founder and former CEO Zain Jeffer.

Informing the masses. If you want more in-depth coverage of artificial intelligence, don't forget to subscribe to our weekly Eye on A.I. newsletter. The newest issue comes out later today.

Some see the solution to Google's Internet domination in a break up of the tech giant. But pursuing that option would be legally difficult and have many unintended consequences. Robert Epstein, senior research psychologist at the American Institute for Behavioral Research and Technology, has a different idea, as he explains in a Bloomberg piece. Epstein's proposal is to force Google to share it gigantic index of the web with other companies via a simple API. Here's what would happen next, he writes:

Within a year or two, thousands of new search platforms might emerge, each with different strengths and weaknesses. Many would target niche audiences—some small, perhaps, like high-end shoppers, and some huge, like all the world’s women, and most of these platforms would do a better job of serving their constituencies than Google ever could. These aren’t just alternatives to Google, they are competitors—thousands of search platforms, each with its special focus and emphasis, each drawing on different subsets of information from Google’s ever-expanding index, and each using different rules to decide how to organize the search results they display.

Is Facebook Libra a Betrayal of Satoshi Nakamoto’s Vision? By Timothy Massad

We've previously told you to watch the third season of Netflix's Stranger Things, as has Jeff Bezos. If you've already streamed it, you know that a fictional version of the classic 1980s-era shopping mall plays a prominent role. New York Magazine's Vulture site has an interesting essay strolling down memory lane to examine the mall in the show and pop culture. Worth a read.