Why Andreessen Horowitz Is Investing in a Newsletter Publishing Platform: Term Sheet 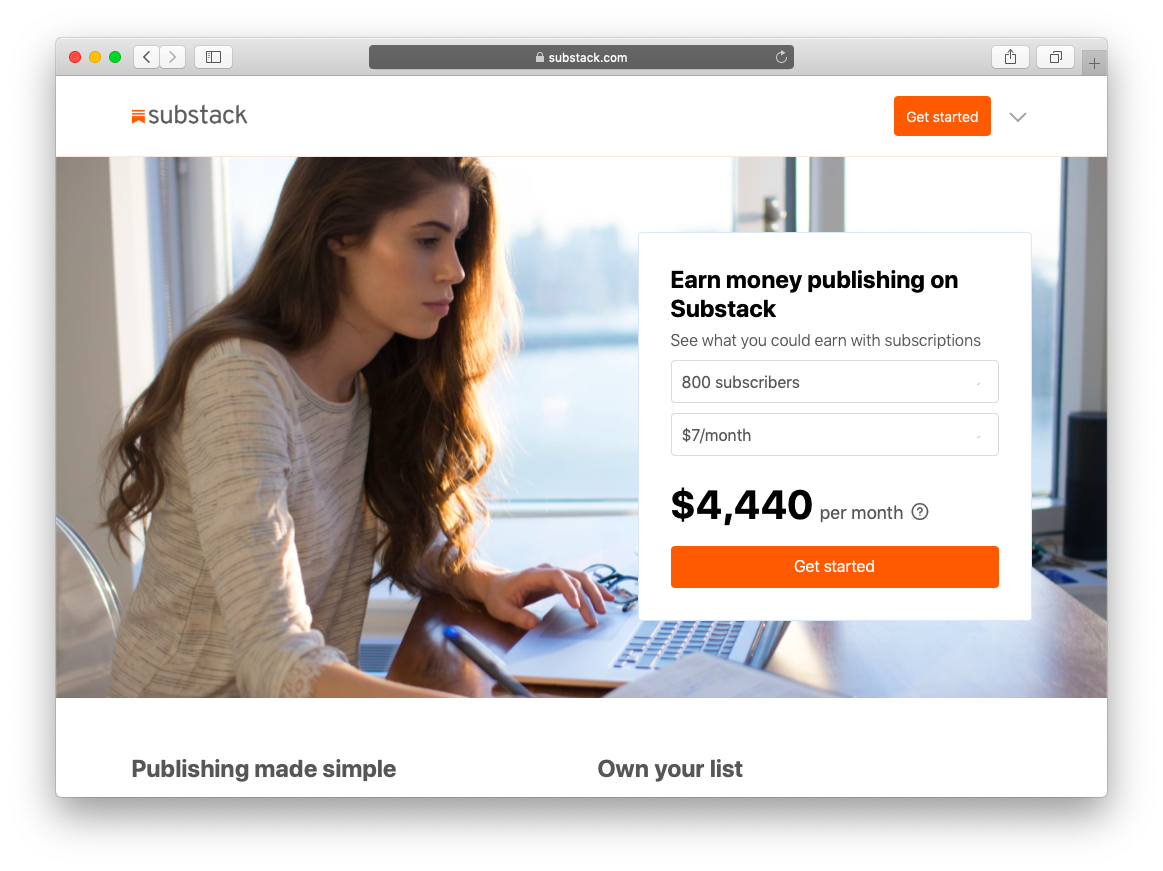 Venture capitalists have an appetite for the world’s oldest social media network: email.

Newsletter publishing platform Substack raised $15.3 million in Series A funding. Andreessen Horowitz led the round, and was joined by investors including Y Combinator. The company was founded by Hamish McKenzie, who has previously worked at PandoDaily and Tesla, alongside Chris Best and Jairaj Sethi, who both worked at Kik.

Here’s how Substack works: Writers can launch a free or a paid subscription newsletter on the Substack platform with no upfront fees. Substack makes money by taking a 10% cut of subscription revenue. There are 50,000 paying subscribers across the entire Substack network. (Disclosure: Substack hosts my personal newsletter The Profile.)

Bill Bishop, who was the first person to launch a newsletter on Substack, charges readers $15 per month for access to his newsletter, Sinocism. It offers daily commentary and curated links about news events in China.

“It was so successful that on his first day with Substack, he got to six figures of revenue,” said McKenzie. “At that point, we thought we have to try to make this possible for other writers.”

When Substack first launched, the co-founders were proactively reaching out to individual writers with large, loyal followings in attempts to convince them to join the nascent platform. One of the people they were hoping to recruit was Andrew Chen, a prolific writer on all things Silicon Valley. Chen didn’t join Substack at the time, but he soon became a general partner at Andreessen Horowitz and took another look.

“When Hamish first told me about it, it was just an idea,” Chen said. “But when they later told me about how fast it’s growing and how writers are already making a nice living through the platform, I thought, ‘Huh. If this is already working now, just how big could it get?’’

Pretty big, he decided. This time, it was Chen initiating the conversation. The entire deal — from conversation to signed term sheet — was done in one week. The company plans to use the funding to hire developers and writer relations specialists. “Oh, and we might actually move into a real office,” Best said.

Chen has big dreams about what the company could become — a one-stop shop for content creators that allows them to make real money from day one. “Substack could provide the tooling, the audience, the monetization hooks, the promotion, and maybe even give you ideas for things to write about,” he said.

But that’s not the reality today. Right now, Substack is a newsletter publishing tool that works best for individuals who already have a built up audience — a percentage of which is willing to shell out $10 to $30 per month for a newsletter. In a thread titled, “What would you love to see in Substack?,” Substack writers outline all of their wishes for product improvements. They include everything from the trivial — photo captions — to the more complex — the development of multiple pricing tiers for reader subscriptions.

“There were like 300 comments in a few hours,” Best said, referring to the thread. “And the three of us were sitting there like, ‘Aha, OK.’ There’s a lot of little things that people want, the the funding will allow us to go faster in building them.”

DEAL ON ICE: Symantec, a security software provider, and Broadcom, a semiconductor maker, have reportedly suspended deal negotiations — at least for now — following disagreements around a takeover price. This marks Broadcom’s second failed attempt to get a high-profile deal done in the last two years. Last March, the chip maker had to call off a $117 billion takeover bid for Qualcomm. Read more.

DNA PRIVACY: Many people who take at-home DNA tests to learn more about their family tree don’t realize that their data could be shared for other purposes. Some consumer DNA testing companies share users’ data with law enforcement, drug makers, and even app developers.

Margo Georgiadis, president and CEO of Ancestry, said her company does not cooperate with law enforcement unless compelled by a court order. In 2018, she says, the company had 10 requests from law enforcement. But those inquiries were related to credit card fraud, not genetics.

“There’s no question that in the industry as a whole, other actors have chosen to go down a different path and not meet the highest standards,” Georgiadis said Monday at Fortune’s Brainstorm Tech conference in Aspen, Colo. “Consumers need to understand they do have a choice, and that there are real differences between companies.” Read more.

Check out the latest from Fortune Brainstorm Tech here.

- Lendbuzz, a Boston-based car financing platform, raised $150 million in debt and equity funding. 83 North led the equity funding round, and was joined by investors including BHI, ConnectOne Bank, IDB Bank and Viola Credit.

- Patreon, a San Francisco-based platform for enabling content creators and artists to be able to fund their work, raised $60 million in Series D funding. Glade Brook Capital led the round, and was joined by investors including Thrive Capital, Initialized, Index Ventures, DFJ, Freestyle Capital, Charles River Ventures, and Otherwise.

- Curve, a London-based banking platform that consolidates multiple cards and accounts into one card, raised $55 million in Series B funding at a $250 million valuation. Gauss Ventures led the round, and was joined by investors including Creditease, Cathay Innovation, IDC Ventures and Outward VC.

- BriteCore, a Springfield, Mo.-based provider of software solutions for insurers, raised $47.5 million in funding. Warburg Pincus led the round, and was joined by investors including Radian Capital and WCF Mutual Insurance Company.

- HostnFly, a France-based developer of a platform to optimize revenue on platforms like Airbnb, raised 9 million euros ($10 million) in funding. Highgate Ventures led the round, and was joined by investors including Partech and Kerala Ventures.

- Altonomy, a Singapore-based trading desk and market maker for cryptocurrency assets, raised $7 million in seed funding. Polychain Capital led the round, and was joined by investors including 7 Blocks.

- Bulletin, a New York-based retail technology company, raised $7 million in Series A funding. Foundation Capital led the round, and was joined by investors including Kleiner Perkins, Trail Mix Ventures and Afore Capital.

- Glints, a Singapore-based operator of a recruitment and career development program, raised $6.8 million in Series B funding. Monk’s Hill Ventures led the round, and was joined by investors including MindWorks Ventures, Fresco Capital and Wavemaker Partners.

- Umbrella, a New York-based startup aiming to help homeowners in their later years connect with others in their neighborhood through a membership-based marketplace, raised $5 million in seed funding. Thrive Capital led the round, and was joined by investors including Inspired Capital.

- Space in Africa, a Nigeria-based provider of daily news and data analysis related to the African space industry, raised seed funding of an undisclosed amount. AC Ventures led the round.

- POPS! Diabetes Care, a Stillwater, Minn.-based diabetes care management company, raised $6 million in Series A funding. 30Ventures led the round, and was joined by investors including Revolution’s Rise of the Rest Seed Fund and Flying Point Industries.

- Livongo Health, a Mountain View, Calif.-based healthcare platform for chronic illness management, plans to raise $230 million in an IPO of 10.7 million shares priced at a point between $20 to $23. It posted revenue of $68.4 million in 2018 and loss of $33.5 million. General Catalyst, Kinnevik Online, and KPCB Holdings back the firm. Morgan Stanley, Goldman Sachs and J.P. Morgan are underwriters. It plans to list on the Nasdaq under the symbol “LVGO.” Read more.

- RA Capital Management, a Boston-based investment firm, raised $308 million for a venture capital fund to target life sciences investing, according to a filing with the SEC.

- Mangrove Equity Partners, a Tampa, Fla.-based private equity firm, raised $175 million for its third fund, according to an SEC filing.