Why Trump’s USCIS Pick Might Be His Most Controversial Yet 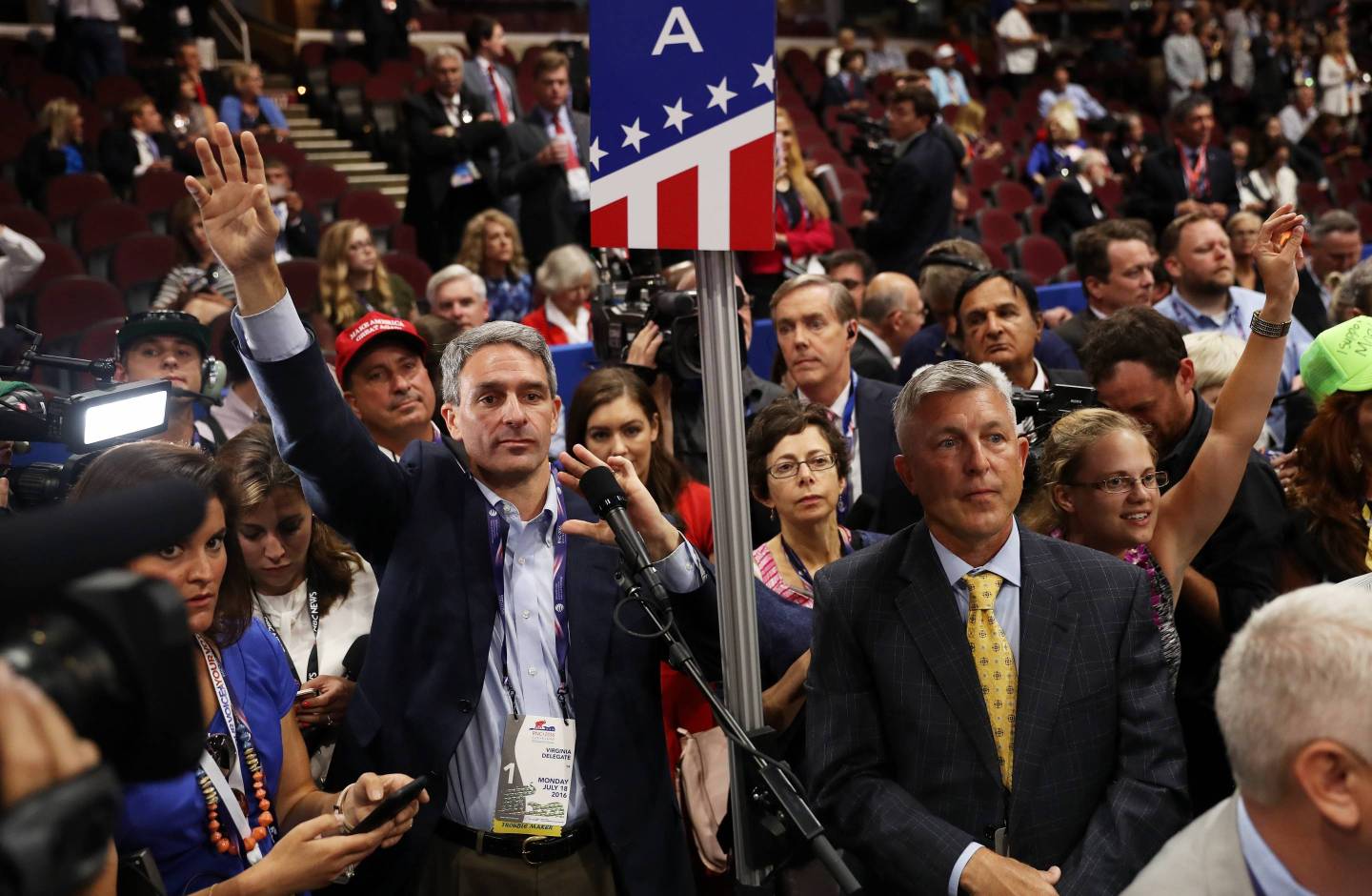 CLEVELAND, OH - JULY 18: Former Virginia Attorney General Ken Cuccinelli (2nd L) along with other delegates from Virginia chant for a rule call vote on the first day of the Republican National Convention on July 18, 2016 at the Quicken Loans Arena in Cleveland, Ohio. An estimated 50,000 people are expected in Cleveland, including hundreds of protesters and members of the media. The four-day Republican National Convention kicks off on July 18. (Photo by Joe Raedle/Getty Images)
Joe Raedle—Getty Images

President Donald Trump has frequently filled vacancies at federal agencies with temporary appointments, but the administration’s latest “acting” designation, Ken Cuccinelli as director of U.S. Citizenship and Immigration Services, may be the most controversial yet.

Every immigration agency within the Department of Homeland Security is currently led by an acting director rather than a Senate-approved nominee. Cuccinelli, a former attorney general and state senator in Virginia, joins acting Immigration and Customs Enforcement director Mark Morgan, acting Customs and Border Patrol Commissioner John Sanders, and overseeing them all, acting DHS secretary Kevin McAleenan.

Cuccinelli is a contentious choice to lead USCIS, the federal agency charged with administering the nation’s immigration benefits, such as work and student visas, permanent residency and citizenship. He has never held a position in the federal government, and has a history of inflammatory rhetoric and stirring controversy. In his first week in the post, members of Congress, a union representing USCIS employees, and immigration advocates have all challenged his qualifications and the legality of the appointment.

During his time in Virginia public office, Cuccinelli fought against birthright citizenship, supported legislation mandating employees speak English in the workplace, and compared immigration enforcement to fighting a rat infestation. When his name was floated as a possible appointment, GOP Senators such as John Cornyn said he would have a tough time being confirmed in no small part thanks to his time in charge of the Senate Conservatives Fund, which challenged many incumbents including Majority Leader Mitch McConnell.

Cuccinelli finds his supporters among immigration hawks, and in April representatives of 19 conservative organizations including Tea Party Patriots Action, Conservative HQ, and former U.S. Senator Jim DeMint signed a letter to the president championing Cuccinelli as a “no-nonsense law enforcement officer and a major constitutional lawyer” who would be “ideally suited” to helm DHS.

Cuccinelli was named USCIS acting director on June 10, a little more than a week after Trump asked former director Francis Cissna to resign as part of a broader DHS reshuffle. Stephen Miller and other White House officials have bemoaned the pace of change at USCIS, and are advancing new policies that will make it more difficult to seek a range of immigration benefits, including asylum.

“What Cuccinelli brings to the table is an aggressive spokesperson who is a defender of Stephen Miller and Trump’s policies,” said Susan Collins, political director of the National Partnership for New Americans, a nationwide organization of immigrants and refugee rights organizations that promotes citizenship and improved integration.

“He’ll back their threats to Mexico and effort to force a crackdown on Central American refugees, and he’ll support the policy of asylum applicants waiting outside the U.S. for processing. Who knows how effective it will be, but they’ve been good at attracting lawsuits. If chaos and mayhem are the goal, and exploiting the crisis they’ve created, then they’ve no doubt chosen the right person.”

On June 18, chairmen of three House committees signed a letter to McAleenan expressing concerns that the appointment violates the Federal Vacancies Reform Act and requesting materials related to Cuccinelli’s selection.

Trump appointed Cuccinelli to a newly created role of “principal deputy director,” which may help circumvent the law. Since the position is technically a new one, the law on federal vacancies theoretically does not apply. University of Texas law professor Steve Vladeck wrote a blog breaking down the “loophole” used by the administration, and concludes the bureaucratic maneuvering is probably legal.

“Cuccinelli’s appointment is probably not an outright violation of the FVRA,” he writes. “But in that respect, it only underscores how poorly drafted the FVRA is—and how easy it is for administrations not as readily subject to conventional political checks to take advantage of its open-endedness.”

Danielle Spooner, president of the National Citizenship and Immigration Services Council, representing some 13,000 USCIS employees nationwide, also questions the legality of appointing Cuccinelli and says the move “spells the end of legal immigration as we know it.”

USCIS officers are accustomed to shifting with the political winds of the White House and Congress, Spooner said, but the changes have never come so rapidly. That has contributed to a historic backlog in applications, the union says, while USCIS staff face greater and greater pressure to issue decisions. As some USCIS responsibilities have been moved to CBP, and the agency faces staffing shortages and the office closures, Spooner says her chief concern is national security as officers will not have the time to properly review cases.

“We don’t have enough employees, and the firing of people is a constant now,” Spooner said. “They’ve imposed completely unattainable performance goals. … I believe that through a series of policy changes they want to make it possible for only an elite group of people to qualify to be an immigrant. They’ve signed a new policy regarding public charges and they are expanding that with another form. They will continue to make it more and more difficult for people to be eligible.”

State Department official John Zadrozny, who previously worked as counsel to Sen. Ted Cruz (R.-Texas) and as legislative counsel at the Federation for American Immigration Reform, a restrictionist organization supporting a two-thirds reduction in immigration and enhanced enforcement, is also joining Cuccinelli at USCIS, as Politico first reported.

“Cuccinelli is a bit of gadfly, he’s aggressive, and doesn’t mind offending people,” Collins said. “Then they move Sadrozy over from the State Department—who had a strong hand in restricting refugee resettlement—and it all comes right before launching the 2020 campaign in Orlando [June 18]. It makes you wonder if they are more interested in immigration as a campaign strategy rather than actually carrying out our nation’s legal system.”

While his credentials and the legitimacy of his appointment are being publicly debated, Cuccinelli has moved forward with his objectives for the agency.

In his first week he instituted a policy diverting the processing for legal permanent residency and citizenship applications from some of the busiest offices to other jurisdictions, ostensibly to expedite processing but also increasing the distance applicants will travel for meetings, and sent an email to asylum officers questioning application approval rates and imploring them to do more to reduce the backlog..

“Cissna wasn’t going fast enough and Cuccinelli, if his appointment is legal, is tasked with going a lot faster,” Spooner said. “He came in right away and insulted asylum officers who, let me tell you, are working for American people and whose utmost goal is to protect national security … It’s unbelievable the director would blame the employees. If they want to eliminate the backlog, they should hire more judges.”