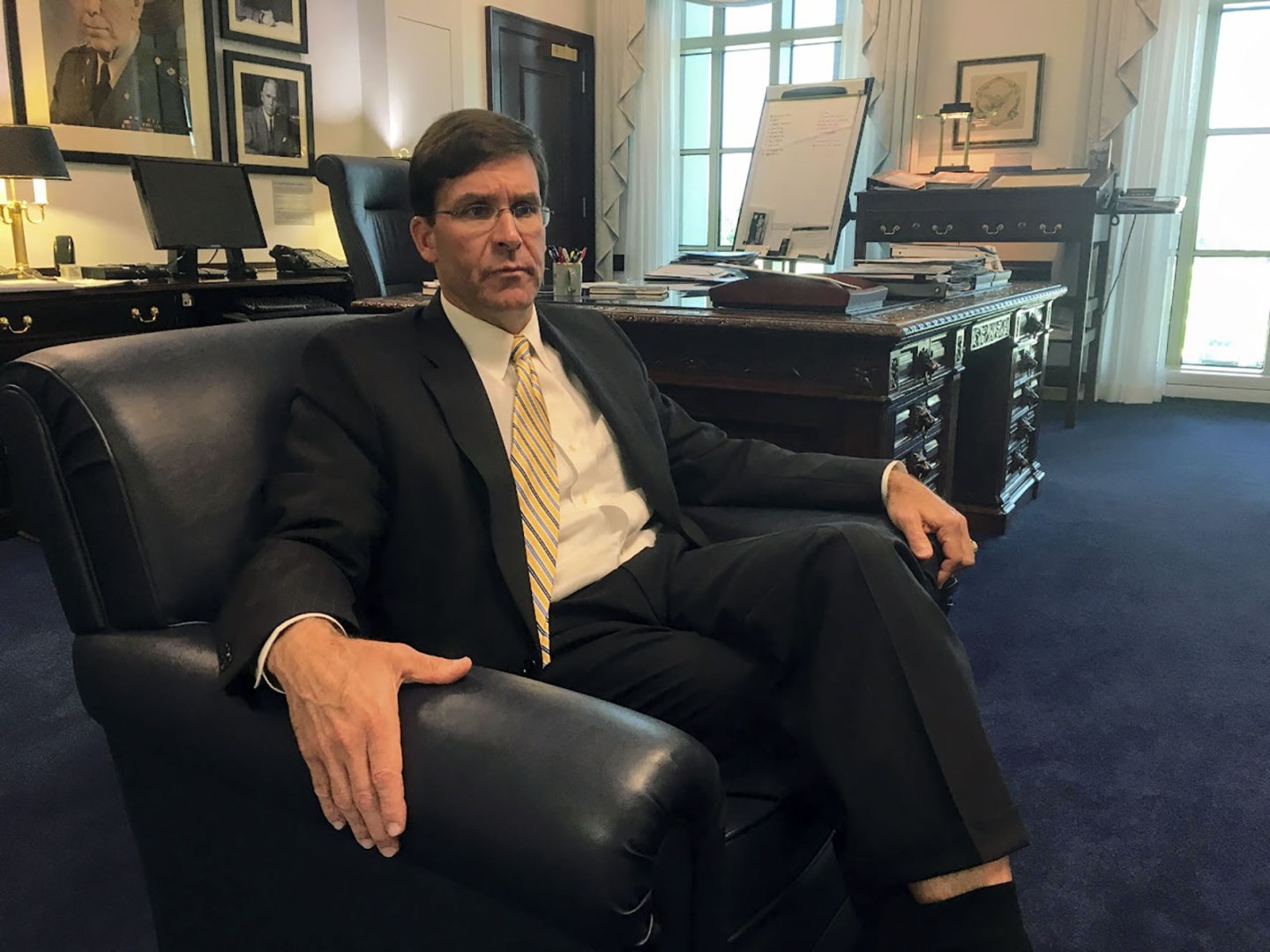 Secretary of the US Army Mark Esper speaks to reporters in his office at the Pentagon on September 19, 2018 in Washington,DC. - Poland might not yet be ready for a permanent US military base, the head of the US Army said Wednesday, the day after Polish President Andrzej Duda offered to host "Fort Trump." (Photo by Thomas WATKINS / AFP) (Photo credit should read THOMAS WATKINS/AFP/Getty Images)
THOMAS WATKINS AFP/Getty Images

President Donald Trump’s pick for new Defense Secretary is an Army veteran who served in the first Iraq war and also has experience as a national security adviser on Capitol Hill as well as a defense industry lobbyist.

Trump on Tuesday said Mark Esper, his current Army secretary, would lead the Defense Department on an acting basis.

“I know Mark, and have no doubt he will do a fantastic job!” the president tweeted.

He later told reporters that he would most likely nominate Esper for the permanent job.

“Frankly this could happen very quickly for Mark Esper,” Trump said. “He’s very experienced. He’s been around all of the things that we’ve been talking about for a very long period of time.”

The move came after acting Defense Secretary Patrick Shanahan withdrew from the job before his formal nomination ever went to the Senate, citing a “painful” family situation that would hurt his children and reopen “wounds we have worked years to heal.”

Esper was sworn in as Army secretary in November 2017 following a seven-year stint as vice president for government relations at defense contractor Raytheon.

That lobbyist background raised immediate alarms from Citizens for Responsibility and Ethics, which said that Raytheon had recently won multiple government contracts worth hundreds of millions of dollars.

“While Esper may not have had sway over these types of deals as Secretary of the Army, as acting Secretary of Defense he will have potential influence over such deals,” as well as a proposed merger between Raytheon and United Technologies Corp., CREW executive director Noah Bookbinder said in a statement.

He was policy director for the House Armed Services Committee and a professional staff member on the Senate Foreign Relations and Government Affairs committees and also advised former Obama administration Defense Secretary Chuck Hagel when Hagel was in the Senate.

He’s also served as a deputy assistant secretary of defense and was a war planner on the Army staff.

Esper spent more than a decade in the Army, including serving in the Persian Gulf War in 1990 and 1991 with the 101st Airborne Division. He has won the Bronze Star Medal and other awards.

“He has a great background. I know him and I think he’ll do very well in the acting role,” said Sen. David Perdue, R-Ga., a close Trump ally who speaks frequently with the president.

It is not clear whether Esper’s defense industry background might complicate any confirmation prospects.

Shanahan came under scrutiny because of his prior career as a Boeing executive and persistent questions about possible conflicts of interest.

The Defense Department’s Inspector General cleared Shanahan of any wrongdoing in connection with accusations he had shown favoritism toward Boeing during his time as deputy defense secretary, while disparaging Boeing competitors.

Bookbinder said Shanahan’s past work at Boeing overshadowed his decisions at the Defense Department.

“His successor will likewise risk being tainted by his previous work for a major defense contractor,” Bookbinder said.