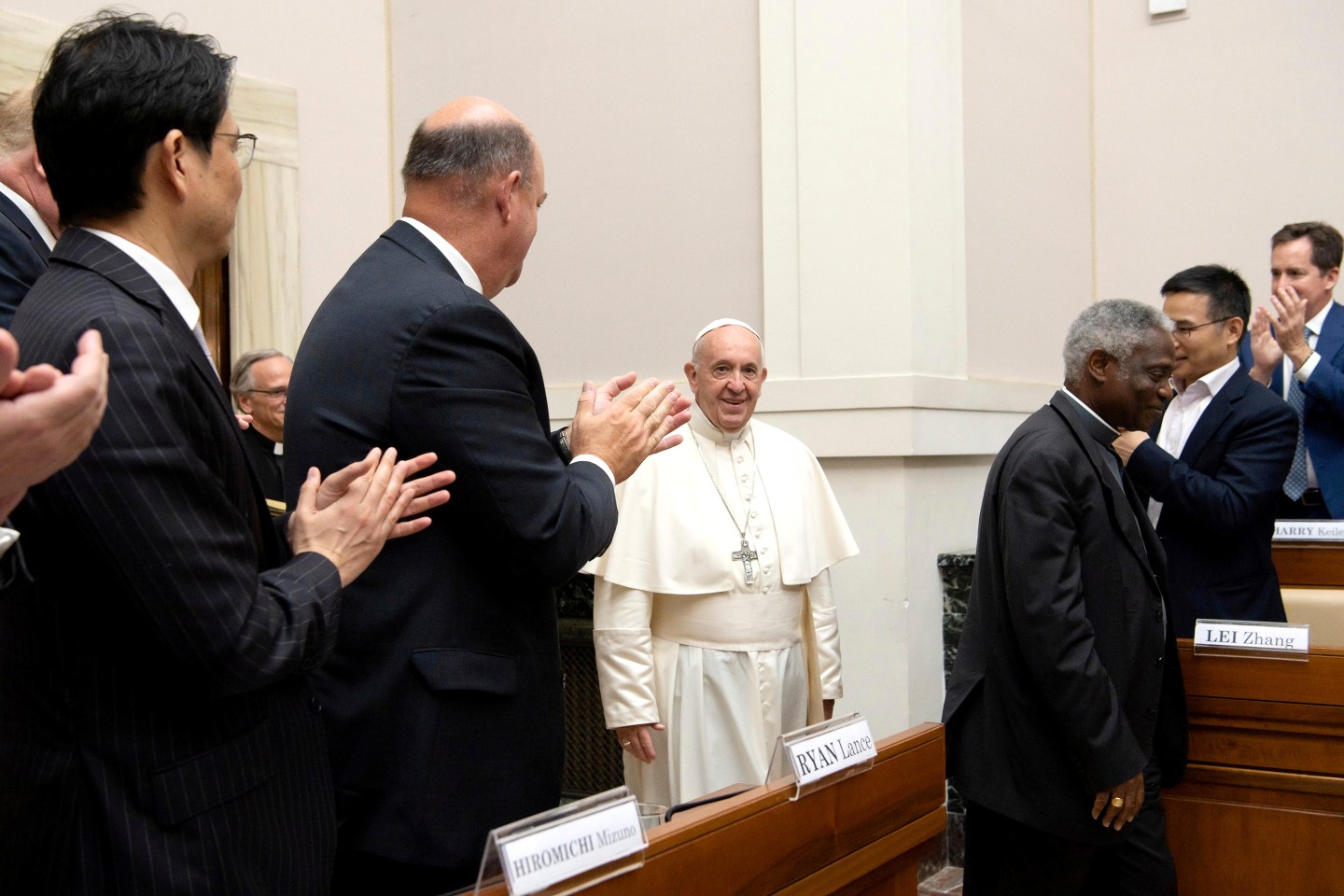 Pope Francis addresses energy representatives at the end of a two-day meeting at the Academy of Sciences, at the Vatican, June 14, 2019. Vatican Media/Handout via REUTERS THIS IMAGE HAS BEEN SUPPLIED BY A THIRD PARTY. - RC118009D120
Vatican Media—Reuters

With protestors clamoring outside the 9th Century Vatican walls last week, a collection of the world’s largest oil and gas companies and investment funds vowed to adhere to the Paris Agreement and to do their part to transition the planet to a low-carbon future, a move that one preeminent climate scientist calls a game-changer.

The CEO pledge followed a personal appeal by Pope Francis insisting the executives follow sound science to avert “a climate emergency” that risks “perpetrating a brutal act of injustice towards the poor and future generations.” The message was clear: the Vatican plans to use its immense influence to get companies to commit to market-based solutions to minimize carbon emissions even in the face of the U.S.’s pull-out of the 2015 Paris accord.

Francis didn’t single out President Donald Trump by name in his statement, but he did take a shot at climate skeptics in general. “We do not have the luxury of waiting for others to step forward, or of prioritizing short-term economic benefits,” the pontiff said.

The CEOs in attendance – which included the chiefs of more than a dozen energy companies, including the CEOs of ExxonMobil, BP, Royal Dutch Shell, Total, Chevron and Eni, plus Black Rock, BNP Paribas and Hermes Investment – appeared to get the message.

In a joint statement, they agreed to the need for a three-pronged approach that calls for further innovation and investment in sustainable energy solutions and the introduction of new carbon pricing mechanisms, and even carbon taxes. “Reliable and economically meaningful carbon pricing regimes,” are needed, the signatories said, “whether based on tax, trading mechanisms or other market-based measures, should be set by governments at a level that incentivizes business practices, consumer behavior, research, and investment to significantly advance the energy transition while minimizing the costs to vulnerable communities and supporting economic growth.”

Hans Joachim Schellnhuber, a climatologist and Director Emeritus of the Potsdam Institute for Climate Impact Research, who participated in the two-day Vatican conference, described the event as one of the most significant of his 30-year career. Noting the caliber of the executives in the room, he told Fortune, “For me, as a climate scientist, it means we are entering a new phase of dealing with [climate change]. The old narratives of denial are buried for good now.”

As Francis urged, time is of the essence to keep global warming below, as Intergovernmental Panel on Climate Change states, 1.5°C by the end of the century.

Schellnhuber, a longstanding member of the IPCC, added there was some difference of opinion in the room on whether to include in the executive letter the wording “below 2°C” or the more ambitious “1.5°C” that the pope used in his speech. Members eventually opted for the softer benchmark, but ultimately they did strike an optimistic note. Through “large-scale action and additional technological solutions,” the executives said, temperature-capping goals could be achieved while also “advancing human and economic prosperity.”

What surprised many in attendance was the pope’s willingness to engage the executives. He stayed for a Q&A panel after making his address, which set the tone for the rest of the event, says Schellnhuber. The conversations among executives was primarily focused on accepted climate science and on practical market-based measures like carbon tax pricing and how to be more transparent with consumers and shareholders about the CO2 impact of day-to-day operations, he said. “It will be really hard to go back on what was discussed.”

Under Francis’ papacy, the Vatican has thrown open its doors to global business leaders as the pontiff pushes his agenda for social justice, financial equality and environmental protections. Some marvel at the success of these events given the pope’s penchant for attacking modern capitalism on occasion. “Pope Francis has at times excoriated the logic of the capitalist system as ‘the dung of the devil,’ a ‘subtle dictatorship,’ and a ‘new form of colonialism,’” Robert McElroy, the bishop of San Diego, writes in the book, A Pope Francis Lexicon. “At other moments the pope has pointed to the achievements of market economies in alleviating global poverty through creativity and freedom.”