Behind the Barricades in Hong Kong, a Game of High-Tech Cat and Mouse—Data Sheet 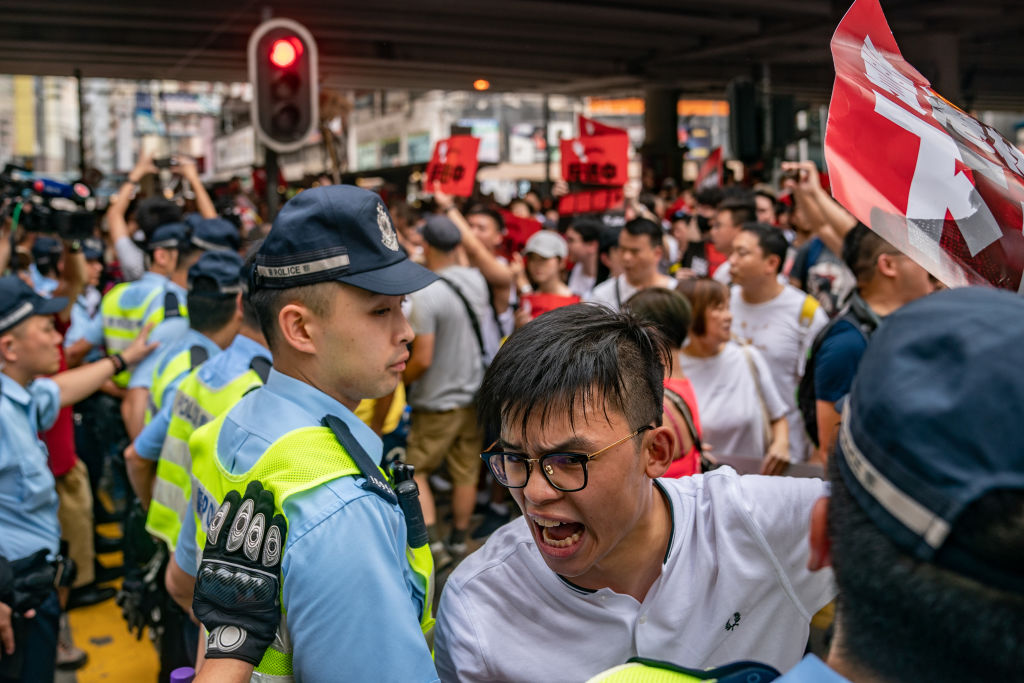 HONG KONG, HONG KONG - JUNE 09: Protesters march on a street during a rally against the extradition law proposal on June 9, 2019 in Hong Kong. Organizers say more than a million protesters marched in Hong Kong on Sunday against a bill that would allow suspected criminals to be sent to mainland China for trial as tensions have escalated in recent weeks. (Photo by Anthony Kwan/Getty Images)
Anthony Kwan—Getty Images

The extradition measure is deeply unpopular here. The artless manner in which Hong Kong’s Beijing-annointed chief secretary Carrie Lam has tried to ram it through has triggered everyone’s worst fears that Xi Jinping means to renege on the autonomy promised this former British colony by Deng Xiaoping when it reverted to Chinese rule in 1997.

On Wednesday tens of thousands of angry protesters, most of them in their 20s or younger, surrounded the legislature to prevent passage of the bill. Riot police opened fire with tear gas and rubber bullets. Things got ugly fast.

Some folks are calling Wednesday’s protest “Occupy 2.0,” a reference to the 2014 sit-in that paralyzed Hong Kong’s for nearly 80 days. But, as the South China Morning Post reports, the new wave of protestors is far more tech-savvy than their predecessors. They’re paying for subway tickets in cash and have ditched the digital (and therefore trackable) Octopus cards widely used to pay for public transport in this city. To thwart police surveillance cameras (plus the batons and gas), they’ve donned hard hats, goggles and masks. They’re using Twitch instead of Twitter to broadcast video from the front lines and they’re using encrypted messaging services like Telegram, WhatsApp and Signal to communicate.

They’re also learning to switch off FaceID and TouchID on their iPhones. The Post report includes a fascinating detail I didn’t know: under Hong Kong law, people have the right not to incriminate themselves, which means police can’t force them to divulge PIN numbers to unlock their phones. Apparently, though, police are allowed to force detainees to unlock handsets using fingerprints or facial recognition. (Go figure.)

But in the digital age, such counter-measures inevitably invite counter-counter-measures. Telegram’s founder Pavel Durov on Thursday accused China of orchestrating a massive distributed denial of service attack to prevent protesters in Hong Kong from using the service. On Tuesday, Hong Kong police arrested a 22-year-old administrator of a Telegram group on suspicion of conspiracy to commit a “public nuisance crime.”

Like many (if not most) apps developed in the West, Telegram, WhatsApp and other encrypted messaging services don’t work inside the Great Firewall of China. They are unrestricted in Hong Kong under the “one country, two systems” framework by which this city is theoretically governed. As Beijing pushes Hong Kong’s technological integration with Macau and Guangdong province into a “Greater Bay Area,” one can’t help wonder how much longer that will remain the case.

Woe betide Facebook. The drama never ends. Yesterday, The Wall Street Journal reported that emails, uncovered by Facebook staff digging-up records requested by the Federal Trade Commission, reveal that CEO Mark Zuckerberg was aware of pitfalls present in the social media giant’s data-sharing policies as early as 2012 but failed to act. Facebook denies the emails exist and the Journal hasn’t seen them but the company’s shares dipped 2% on the news.

You can’t hack me, I quit. This week, rock superstars Radiohead released 18 hours of additional audio to their seminal album, OK Computer, after hackers tried to hold it ransom. Rather than pay, Radiohead put the files online for £18 ($23) and pledged the proceeds to charity. Today, Google adopted a similar mindset and tweeted images of its upcoming Pixel 4 after a tech blog leaked digital renders of the phone’s design. “Wait ‘til you see what it can do,” Google teased, seizing the narrative back from the leakers.

Speaking of Google… The tech giant plans to move some manufacturing of its U.S.-bound Nest appliances out of China, to avoid Trump’s 25% tariffs. Much of the production is moving to Taiwan. Taiwanese owned Foxconn, a major manufacturer for Apple, said it could move iPhone production out of China too, if needs must.

Huawei wants to break free. Embattled Huawei has deployed 10,000 engineers to rid itself of dependence on U.S. tech before Washington’s reprieve on an effective embargo of U.S. components expires in August. Two months is not enough time. Huawei cancelled its new laptop launch yesterday, because it can no longer supply them, and yet is pushing into autonomous vehicles, where Huawei could provide modems, chips and A.I.  – provided it can still gather all the components it needs.

Picking up the slack. Corporate communication tool Slack is expected to reach a $17 billion valuation in its New York IPO next week. The company, which operates an internal messaging system for workplaces, was valued at $7.1 billion in its last fundraising. But keep your eyes on the horizon for Slack-challenger Lark, which $75 billion tech start-up Beijing Bytedance launched in Singapore last month.

A genetics start-up is using CRISPR technology to edit pig DNA so that porcine organs can be successfully transplanted into monkeys. It’s an experimental step in eGenesis’ ultimate goal of using pigs to resolve the shortage of human organ donors. eGenesis is not the first to experiment with the technique and, with 100,000 Americans on transplant waitlists, some doctors are wondering how long we should hold-off before using the offal:

“We’ve got a Chevy. We may even have a BMW now. Do we wait for a Ferrari? There’s a point where you just want to give it a test drive,” says Devin Eckhoff, director of the medical school transplantation division at the University of Alabama at Birmingham.

The Future of Work Depends on Education Reform By Ginni Rometty

Why Amazon Couldn't Compete With Uber and DoorDash By Andrew Hirschfeld

Lego has spent the last seven years trying to derive a plastic from plants so that it can make its bricks eco-friendlier. “Lego tried making pieces from corn, but they were too soft,” the Journal writes. Personally I imagine softer Lego bricks would find a receptive market among parents, tired of stepping on upturned shards of the brightly-colored Danish shrapnel.

This edition of Data Sheet was curated by Eamon Barrett. Find past issues, and sign up for other Fortune newsletters.