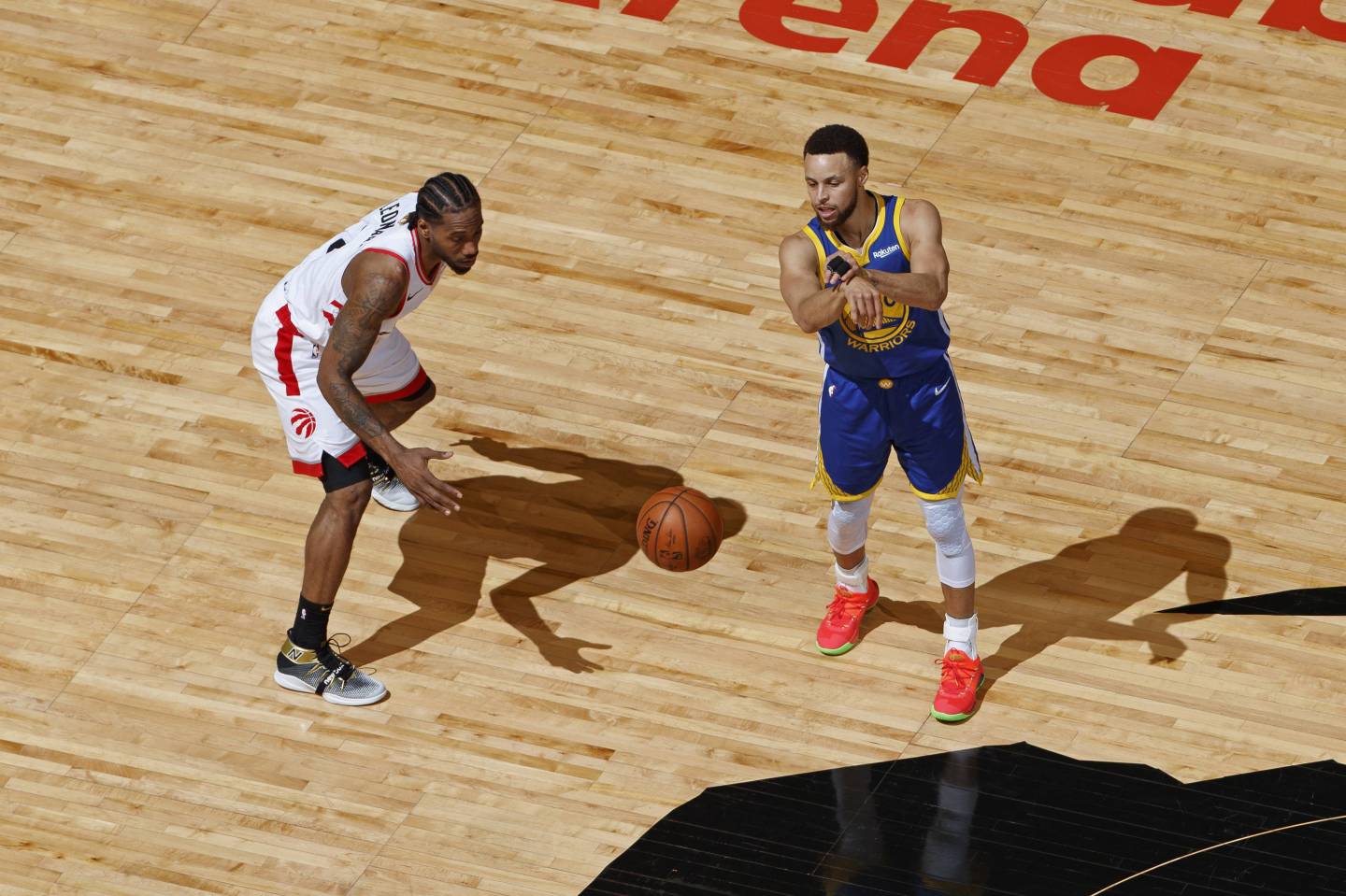 TORONTO, CANADA - JUNE 02: Stephen Curry #30 of the Golden State Warriors passes the ball while guarded by Kawhi Leonard #2 of the Toronto Raptors during Game Two of the NBA Finals on June 2, 2019 at Scotiabank Arena in Toronto, Ontario, Canada. NOTE TO USER: User expressly acknowledges and agrees that, by downloading and/or using this photograph, user is consenting to the terms and conditions of the Getty Images License Agreement. Mandatory Copyright Notice: Copyright 2019 NBAE (Photo by Mark Blinch/NBAE via Getty Images)
Mark Blinch—NBAE/Getty Images

Whatever the outcome of Game 5 of the NBA Finals tonight in Toronto, the league has some potentially sizable changes underway for one of its other hot properties, its NBA League Pass subscription service.

Prior to the Golden State Warriors Game 3 battle with Kawhi Leonard and the Toronto Raptors last week at Oracle Arena, the league gave a glimpse of its latest tech-related strategies. This included brief demos displaying how Google and Snapchat can show highlights and loads of information on your favorite teams when you watch on your smartphone or tablet.

What else is new? For starters, there will soon be three different ‘modes’ to watch in: Player, Coach, and Mascot. All three options work via player-tracking technology provider Second Spectrum, which tracks data and uses nifty graphics reminiscent of the NBA 2K video game.

Viewers who catch highlights of the NBA Finals on ESPN’s SportsCenter may get a sense of how the league is using the augmented content.

In “Player Mode,” viewers will see the scoring probabilities for each player in real time. So, when Golden State Warriors shooters Stephen Curry and Klay Thompson appear on the screen, small graphics pop up with their chances of making those same shots in real time.

This heightens the intrigue, or blood pressure, of watching (and also could be useful for friendly wagering).

The “Coach Mode” supposedly makes viewers feel like a coach, providing on-court Xs-and-Os strategy, such as if an offense running a pick-and-roll to get a good shot would be effective against a box-and-1 defense.

And, “Mascot Mode” is precisely what it is, offering more of a fun and light-hearted broadcast of the game mostly targeting kids. This could include animated comic book-like graphics, including a fire on a basket when a team is on a scorching scoring spree, or a 3D on-screen brick when a team shoots horribly.

The features could make watching NBA games more exciting, possibly even drawing in more casual fans wanting to learn more about the nuances of basketball. This all comes as NBA games continue to move away from playing close to the rim to now a free-flowing barrage of three-point shooting. “Fans have a lot of options to choose from. We’re trying to do our best to keep them engaged in various forms,” said Scott Stanchak, the league’s vice president of emerging technologies.

And, it turns out viewers outside of the U.S. are already using the features as the NBA has been experimenting with them during the playoffs. League Pass is available in some 200 countries including China, Brazil, Canada, and Mexico. The NBA’s huge following at times allows the league to take some creative chances without disrupting their domestic fan base. Incidentally, the league now has more than 100 international players on rosters including likely NBA MVP Giannis Antetokounmpo of the Milwaukee Bucks who hails from Greece, and Rookie of the Year favorite Luka Dončić of the Dallas Mavericks who’s from Slovenia.

In the U.S., League Pass costs between $200 to $250, depending on the plan. The NBA doesn’t publicly disclose the number of League Pass subscribers, but a league spokesman said it had a record number of subscribers globally this season, up 21 percent from last season.

Sam Farber, the NBA’s vice president of digital media, said the league has to constantly adapt to wherever the games are being shown.

“We’re paying close attention to what our fans like and don’t like and what’s working and not working,” he said. “Our game is constantly evolving, and so are our fans’ habits, We need to be ready.”