Why Cash Is Quickly Disappearing From China’s Economy—Data Sheet 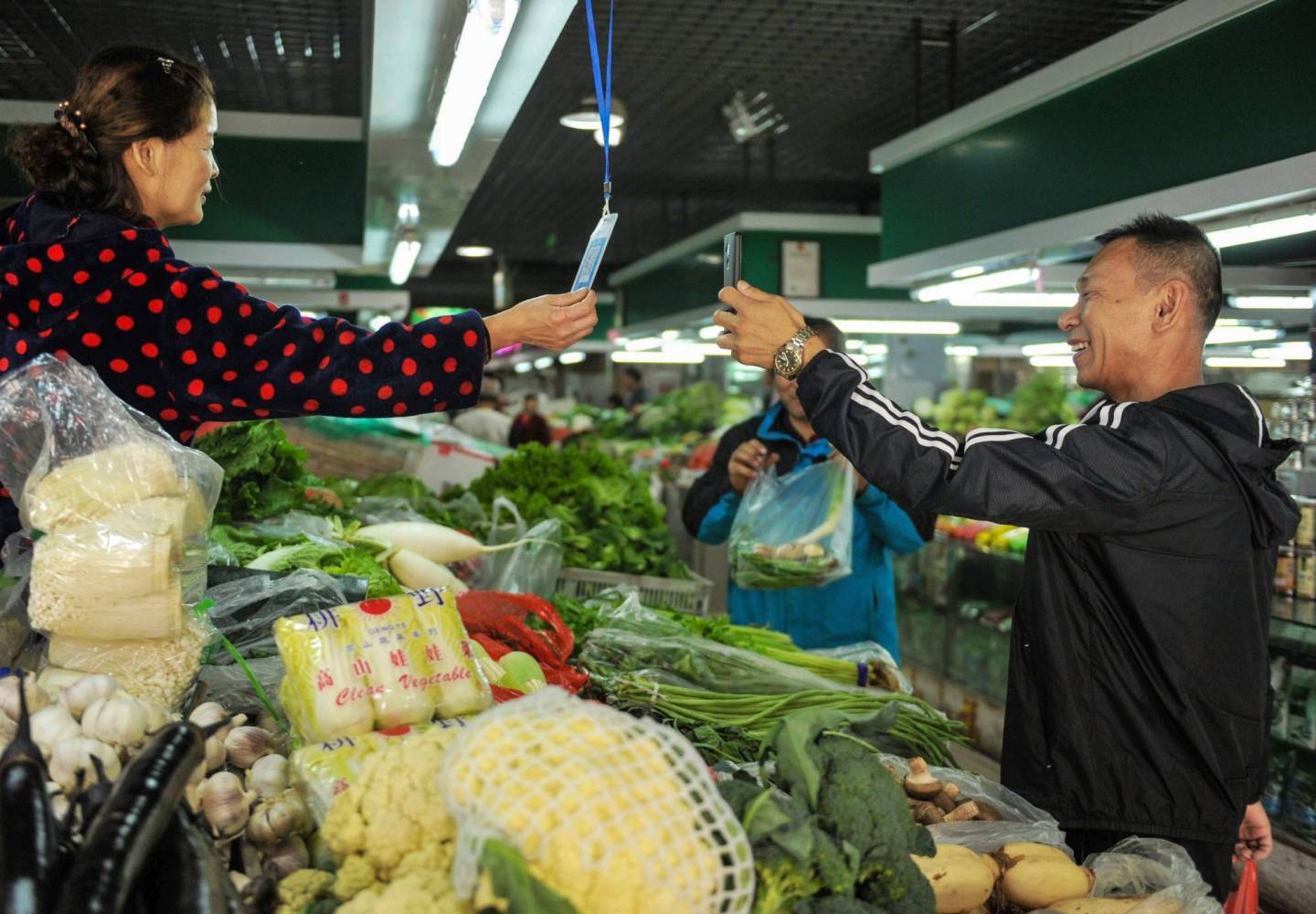 A customer pays for vegetables with his mobile phone at a stall in Qingdao in China's eastern Shandong province on October 16, 2018. - China's consumer inflation accelerated for a fourth straight month in September with big jumps in food prices, while factory gate inflation slowed, official data showed on October 16. (Photo by STR / AFP) / China OUT (Photo credit should read STR/AFP/Getty Images)
STR AFP/Getty Images

I’m just back from a few days in Beijing where I marveled anew at how modern China is a becoming a post-money society.

I don’t mean post-material society; in today’s China, people still care immensely about wealth: who has how much of it, how they got it, how they spend it. But it’s so two-years-ago for anyone to bother with actual money, those little scraps of paper adorned with the portrait of Chairman Mao.

In China’s largest cities these days, one doesn’t sully one’s fingers with actual cash. Whether it’s paying for a latte at Starbucks, a ride cross town with Didi Chuxing (China’s equivalent of Uber), a roast goose feast at Da Dong, or a simple jianbing on Wangfujing Street, one handles transactions via mobile phone using Alipay (the online payment platform of Alibaba Group affiliate Ant Financial), or WeChat Pay (backed by Alibaba rival Tencent Holdings). As Tom Friedman observed on a recent visit, in China even the beggars use QR codes.

And it’s not just shopping that’s going cashless. A recent survey by EY, the global financial consultancy, found that consumers in China— along with counterparts in India and the United Kingdom—lead the world in adopting financial technology. EY quizzed more than 27,000 people from 27 countries on their use of “fintech” in five categories: money transfer and payments, budgeting and financial planning, savings and investments, borrowing, and insurance. In China and India, 87% of respondents said they used fintech for such services; in the U.S., usage was just 46%.

My colleague Derek Zhang, who edits our Chinese language sister publication Fortune China, points out that China’s fintech industry itself is in the throes of a dramatic shift. In the industry’s early stages, many Chinese tech companies portrayed themselves as a “disruptors” seeking to “disintermediate” consumers from traditional financial services providers and pushing into services such as lending and asset management.

But regulators began to worry tech firms were putting too much pressure on the income of traditional banks. Last year, after the implosion of a credit bubble in person-to-person lending, Beijing clamped down on tech firms horning into financial services. Partly because of the tighter regulations, venture funding for China’s fintech firms has fallen sharply. CB Insights reports that venture funding for fintech ventures in China in the first quarter of this year plunged to $192 million, an 89% decline from the previous quarter.

The next wave of startups has a different approach. These upcoming fintech players are positioning themselves as partners to banks, not rivals, The South China Morning Post reports. But at least they won’t have to deal with cash.

Is too late now to say sorry? Securities regulators aren't happy with messaging app Kik Interactive's 2017 $100 million fundraising via a digital token sale. The SEC on Tuesday sued Kik for selling unregistered securities. The case could help clarify just when such digital tokens should be considered securities.

Head in the clouds. Back on the Wall Street of properly registered securities, Salesforce.com reported quarterly revenue increased 24% to $3.7 billion and adjusted earnings per share rose 26% to 93 cents. Both were better than analysts expected and the company also raised its outlook for the rest of the year. Salesforce shares, already up 10% this year, rose another 4% in premarket trading on Wednesday. Things weren't so rosy for video game retailer GameStop. After reporting that sales fell 13% to $1.6 billion and suspending its dividend, shares of GameStop, previously down 38% this year, cratered another 29% in premarket trading.

Controversial controversy. After reviewing videos filled with potentially homophobic and racist slurs, YouTube determined that conservative commentator Steven Crowder had not violated its policies and did not take down the material. “Opinions can be deeply offensive, but if they don’t violate our policies, they’ll remain on our site," the company said. Vox writer Carlos Maza, the subject of Crowder's slurs, called the decision "an absolutely batshit policy that gives bigots free license.”

Doing wheelies. Scooter service Bird announced a new vehicle would be added to its rental fleet. Dubbed the Bird Cruiser, the motorcycle-like electric vehicle has wide tires for rough pavement and seats up to two people on its cushy seat. “To further accelerate progress on our mission to make cities more livable, we are providing additional environmentally friendly micro-mobility alternatives," CEO Travis VanderZanden said.

The era of flying cars popularized in the Jetsons cartoons of my youth and then made even more (fictionally) enticing in Steven Spielberg's Minority Report finally may be inching closer to reality. Bloomberg reporters Richard Weiss and Stefan Nicola have assembled a beautifully illustrated survey of the field of robotaxis, examining the many startups trying to build self-driving flying craft that could ferry passengers short distances. Here is their write up, for example, of the Lilium Jet:

The electric air taxi, powered by 36 jet engines that swivel after takeoff so it flies like a fixed-wing plane, uses 90% less energy than helicopter-like drones, giving it enough range to fly from New York to Boston. Lilium says a ride from Manhattan to the city’s airports would cost about $70 per passenger.

WWDC 2019: The Most Important Apple Developer Keynote in Recent Memory By Don Reisinger

WWDC 2019: How the Apple Watch Is Breaking Free From the iPhone By Aaron Pressman

Apple's announcement that it was finally, finally killing its bloated, Frankenstein-like iTunes media manager app was greeted with loud cheers at WWDC on Monday. It has also prompted some great essays reflecting on the company's role in the transition from analog to digital music, the implications of that transition itself, and the role iTunes played in many people's lives. I particularly recommend Alyssa Bereznak's "eulogy" for iTunes at The Ringer.

"That iTunes has held on longer than the iPod or the audio jack is frankly amazing, and a testament to just how central it once was to Apple’s identity," Bereznak writes. Central, indeed.