That Odd Feeling When the Crowd Cheers a $6,000 Computer—Data Sheet 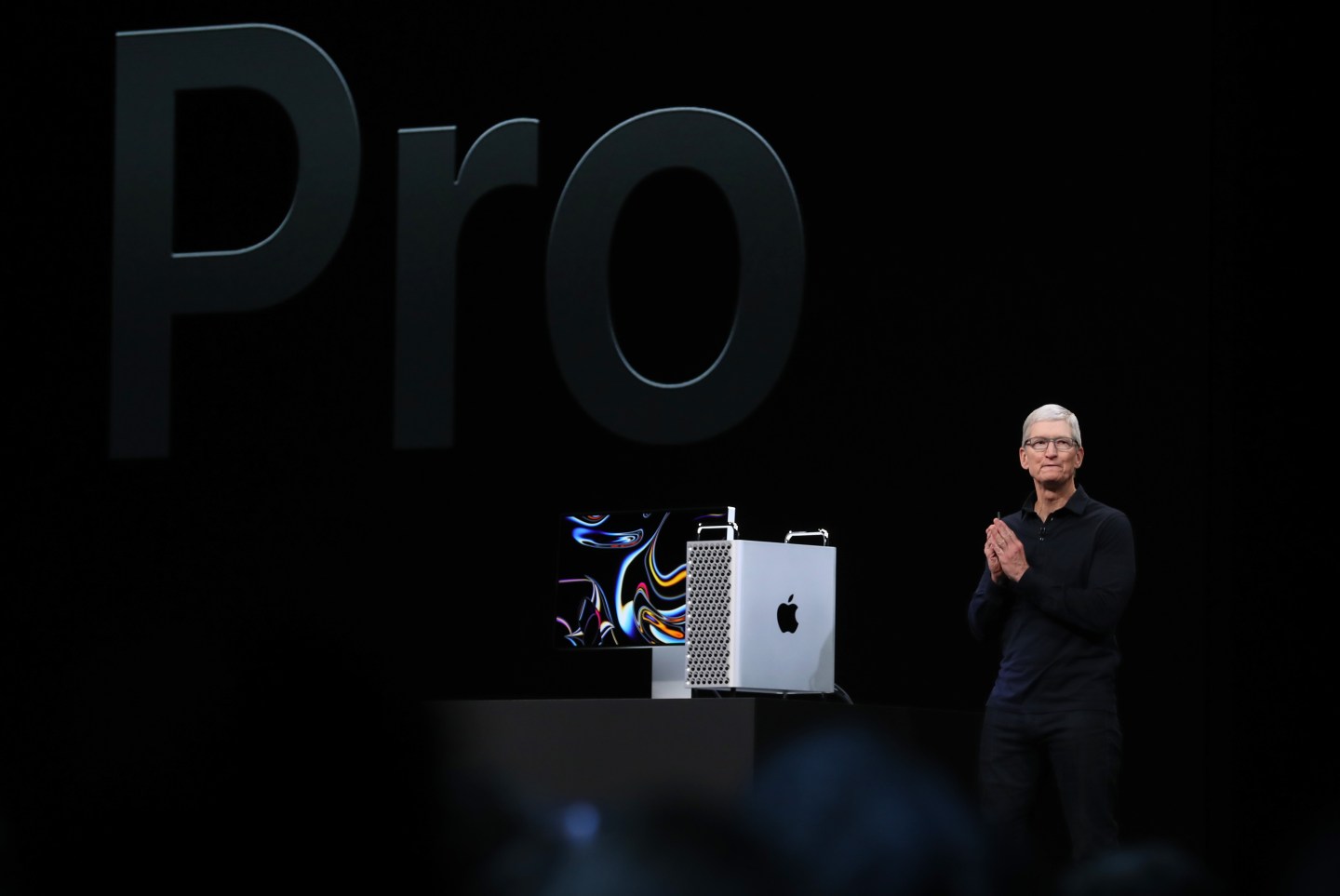 There have been years when Apple used the keynote presentation at its annual developers conference to launch major new products or otherwise tailor its message to a general, consumer audience. This was not one of those years. Apple’s annual event more and more resembles Google I/O, an appropriately informative session for partners who develop software for the giant company’s platform.

It’s an odd feeling when a crowd of thousands cheers and pulsates at the introduction of a $6,000 computer. Apple’s devoted partners applauded that and more at a convention center in San Jose, Calif., Monday morning. Apple opened the event with a black-and-white video of weary knowledge workers toiling late into the night. It ended with the inspiring message: “While the world sleeps, you dream.”

Always on message, Apple executives proceeded to talk about their many incremental changes to their TV, iPhone, Watch, iPad, and Mac software lines—and little else. Some thoughts:

* Much will be made about the most consumerish of Apple’s announcements, the elimination of iTunes on the Mac. But likely the most significant series of changes were to the iPad. Little by little, Apple is making the iPad less distinguishable from a laptop. That’s a good thing if Apple wants to sell more iPads.

* Apple continues its aggressive ways on privacy, from anonymized email addresses to allowing app users to sign into third-party accounts through Apple. The implication is that Apple is more trustworthy than Google or Facebook. Many users would agree.

* Apple Watch is increasingly becoming a standalone device, with its own App Store and more of its own apps. That “failure” of a product is looking stronger all the time.

Apple ignored so much more on Monday: specifics about the launch of its Apple TV+ streaming service, any sort of update on uptake of its enhanced Apple News+ offering, its thoughts on swirling rumors that Washington is scrutinizing Apple for antitrust violations, and word on how the U.S.-China trade spat will affect Apple.

After all, this is an event for developers.

The upsidedown. In an alternate universe, angry Facebook shareholders approved a raft of resolutions to limit the company, including kicking out Mark Zuckerberg as chairman. But back in the real world, Zuckerberg controls a super majority of the voting power of Facebook shares. Excluding Zuck's votes, 67% of shareholder votes cast were in favor of an independent board chairman and 82% wanted to eliminate the super-majority class of shares. In the vote that actually happened, the total was 80% against an indie chair and 76% against the share change.

Facing the music. Speaking of people angry about Facebook, leading Democrats in the House of Representatives said on Monday that they will conduct a broad review of the social media giant and its compadres–like Google, Amazon, and Apple–to see if they are stifling competition and if antitrust laws need to be changed as a result. "Market power in digital markets presents a whole new set of dangers," House Antitrust subcommittee chair David Cicilline said. Apple CEO Tim Cook told CBS that his company is "not a monopoly." The lawmakers' announcement pushed stock prices down: Facebook lost 8%, Google dropped 6%, Amazon was down 5% and Apple lost 1%.

Not facing the music. Wikileaks founder Julian Assange cannot be detained to face a 2010 rape allegation in Sweden, a move which would have allowed him to be extradited to that country, a Swedish judge ruled on Monday. Assange still faces possible extradition to the United States over allegedly leaking confidential government information.

Crunch time. On Wall Street, cloud software provider Box is tumbling after providing a weak forecast for the rest of the year. Box brought in $163 million of revenue, up 16%, and halved its adjusted net loss to 3 cents a share, both slightly better than expected. But the 2019 sales forecast of as much as $692 million disappointed. Box shares, previously up 6% this year, fell 16% in premarket trading on Tuesday.

Small potatoes. Advertising in podcasts is growing quickly but remains tiny compared to other media. Spending rose 53% last year to $479 million, the Interactive Advertising Bureau and PricewaterhouseCoopers LLC report. Ad spending will reach $679 million this year, the firms forecast. That pales in comparison to the $71 billion spent on TV, for example.

The conventional wisdom around computer security seems to be that users should be forced to change their passwords every couple of months. That's certainly the case at our company currently–and at every other company I've ever worked at. But as Ars Technica's fabu security reporter Dan Goodin reports, security researchers don't actually think that's a good idea. In fact, they think it's a bad idea:

Researchers have increasingly come to the consensus that the best passwords are at least 11 characters long, randomly generated, and made up of upper- and lower-case letters, symbols (such as a %, *, or >), and numbers. Those traits make them especially hard for most people to remember. The same researchers have warned that mandating password changes every 30, 60, or 90 days—or any other period—can be harmful for a host of reasons. Chief among them, the requirements encourage end users to choose weaker passwords than they otherwise would. A password that had been “P@$$w0rd1” becomes “P@$$w0rd2” and so on. At the same time, the mandatory changes provide little security benefit, since passwords should be changed immediately in the event of a real breach rather than after a set amount of time prescribed by a policy.

WWDC 2019: Apple Watch Gets Female Menstrual-Cycle Tracking and These Other Health Features By Aaron Pressman

WWDC 2019: Apple May Have Just Swiped 130 Million Console Gamers Without Breaking a Sweat By Chris Morris

Forget Zuckerberg's alternative history. How about an alternative universe where the 1960s space race between the United States and the Soviet Union never petered out. That's the premise of the new TV series For All Mankind from Battlestar Galactica reboot genius Ron Moore. It's going to appear on the Apple TV+ service at some point this year. Tim Cook played a teaser trailer at WWDC on Monday and then raved: "I loved it and I think you're going to, too."