On Trade, Trump Should Look to Japan in the 1970s 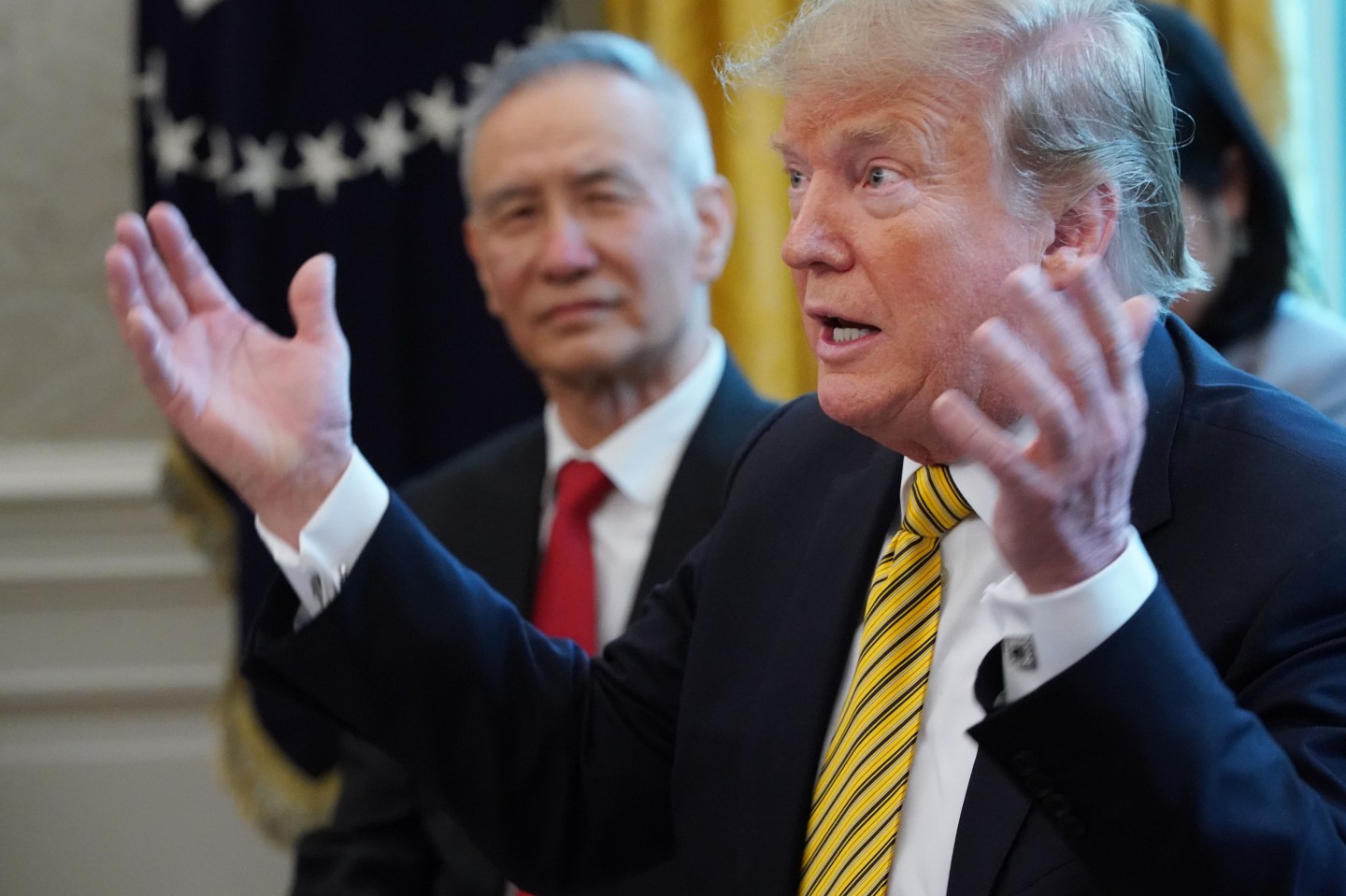 Is it possible Trump has the right point, but the wrong tactics on trade?

Put simply, Trump believes that our giant trade deficit with China exerts a heavy drag on America’s growth. Yet most professional economists disagree, arguing that U.S.-China trade is a major plus, and that the shortfall just reflects that Chinese producers can make sundry products a lot cheaper than we can. Consumers, they argue, benefit from bargains on Chinese-made sneakers, steel, and semiconductors that power their cellphones, leaving America’s families with more cash to spend on U.S. made goods. What’s more, the academics assert, it’s precisely the challenge of battling low-cost overseas competitors that keeps U.S. manufacturers super-productive.

Here’s the countercase: That Chinese protectionism has caused the U.S. manufacturing to shrink in size, especially because the Chinese have denied us the access we’ve provided them, and they’ve systematically undervalued their currency. If so, it could be that U.S. would be making more goods at home, and be boosting wages and retaining jobs by constantly making them faster, cheaper and better, if the U.S. hadn’t allowed the trade gap with China to expand to such Brobdingnagian proportions.

To explore that question, I called a distinguished professor emeritus of international economics, under whom I’d studied at the University of Chicago Graduate School of Business (now the Booth School), Robert Aliber––affectionately known by his initials R.Z.A. to his former students. Aliber is a strong free-market advocate, so I thought that he might condemn Trump’s crusade against China. His view was a surprise, and is at odds with the academic orthodoxy. “I applaud Trump’s efforts to get the trade deficit down, even though I fault his approach,” Aliber told me. “Under Bill Clinton and George W. Bush, the approach was benign neglect, and that was a mistake.”

Aliber’s argument centers on how by shrinking the size of America’s manufacturing base, our lopsided trade with China has weakened the primary engine of economic growth, gains in productivity. “Let’s start in 1980, the last year America had a zero trade balance,” Aliber noted. “That year, America had 20 million jobs in manufacturing. Today, the number is 13 million.” Most of his colleagues attribute that decline overwhelmingly to advances in technology that allowed automation to replace workers. For Aliber, that’s only part of the story. “By my estimation, the U.S. lost 4 million jobs to automation,” he says. “But we lost the other 3 million specifically because imports grew so much faster than exports.” And, he points out, the gap grew so large because we bought so much more from China than than we sold to our largest trading partner.

It’s informative to examine the scale of that trend. In 1999, the U.S. had a trade deficit in goods of $337 billion, and a shortfall with China of just $68 billion. Last year, the deficit had expanded 160% to $891 billion, and the imports from China exceeded exports by a record $419 billion. So the rise in the imbalance with China accounted for 84% of the increase in the overall deficit. Surprisingly, our total trade deficit in goods is about the same now as in the mid-2000s, but the Chinese portion keeps rising, waxing 33% since 2012.

The rise in the trade deficit came at the expense of U.S. manufacturing as Chinese imports replaced shoes and steel once made at home. But America continues to be a robust producer, and in fact makes far more products than in previous decades with a much smaller cadre of workers. As an excellent 2017 study from polling firm Pew Research emphasizes (and I’ve updated their numbers), the U.S. manufacturers 85% in more in the goods measured by their dollar value, adjusted for inflation, than in 1989. Output rose 2600% for computers, 124% for motor vehicles, and 44% for machinery, offsetting big declines in the likes of paper, textile and apparel. What’s remarkable is that U.S. industry accomplished that feat with 33% fewer workers. In that 41 year span, worker output per hour has improved 150%. In the mid-80s, it took ten worker hours to make a ton of steel; today it takes less than two hours.

“Productivity gains in manufacturing are much greater than in services,” notes Aliber. Today, manufacturing accounts for around 19% of economic output, down from 24% in 1987, but it’s still the major source of past and future increases in productivity––just the point Aliber stresses. A case in point is the period from 2002 to 2008. Over those seven years, output per hour worked in manufacturing surged 32%, or around 4% a year, and contributed almost half of the almost 2 point annual increases for the overall economy, even though productivity in services rose around one-fourth as fast. Following the financial crisis, productivity flattened, but it’s ticked up of late, gaining about 1 point a year since mid-2016.

Aliber’s view is that the key to the kind of gains we saw in the 2000s is a large, thriving footprint in manufacturing. But he isn’t saying that blocking Chinese imports via tariffs, or other protectionist measures, are the solution. Rather, Aliber contends that China’s unfair trade practices are suppressing U.S. exports so that the gulf between what we buy and sell is a lot larger than it would be if China played by the rules. He cites China’s high import duties––20% and up on cars, for example––as well as discriminatory technical standards designed to bar U.S. goods, and requirements that we partner and share our technology with local partners, ensuring that U.S.-designed products are made in China rather than exported from the U.S.

Aliber says that Trump is correct to take a strong stand, but may be using the wrong tactics by imposing 25% tariffs on $250 billion in Chinese exports to the U.S, and threatening to do the same with the remaining $350 billion if China retaliates. “I’ve only seen tariffs work to create freer trade in one case,” says Aliber. “That was in 1971, when the U.S. imposed duties to force Japan to allow the yen to float, and therefore increase its price.” But the policy of pressing China to reform on multiple fronts requires agreement on so many individual points that a final agreement may be unreachable. “I prefer the approach that Treasury Secretary John Connolly took with the Japanese in the early 1970s,” says Aliber. “He said, ‘We want you to buy a lot more U.S. goods. But you can do it through government purchases or any other mechanism. The instrument is up to you.'” For Aliber, the best approach is to let China decide which of the protectionist measures its leaders want to dismantle, but stick to the goal of shrinking that yawning, $400 billion-plus trade deficit in the interests of bolstering U.S. manufacturing.

That goal, Aliber contends, is especially timely because China is now facing a credit crisis. The threats, he says, are a gigantic oversupply of housing, and underwater loans from the big state banks to government-controlled enterprises. When the bubble bursts, he says, domestic consumption will drop, and the value of the yuan will fall. Plants making cosmetics, apparel or appliances will lose domestic sales, and look to exports to the fill the idle capacity. As a result, the pressure on China to sell us more products will intensify. Getting the Chinese to buy a lot more of our products by opening their markets, he says, is the best way to blunt the potential damage. That’s the best possible deal, and the one Trump claims to be seeking. But as Aliber point out, Trump may squander a noble goal by pursuing tactics so unwieldy that what was allegedly designed to curb China’s abuses ends in a quagmire of abuses from both sides.

—China’s running out of U.S. goods to tariff, but it has other trade war weapons to unleash

—How China’s top-down political system holds it back