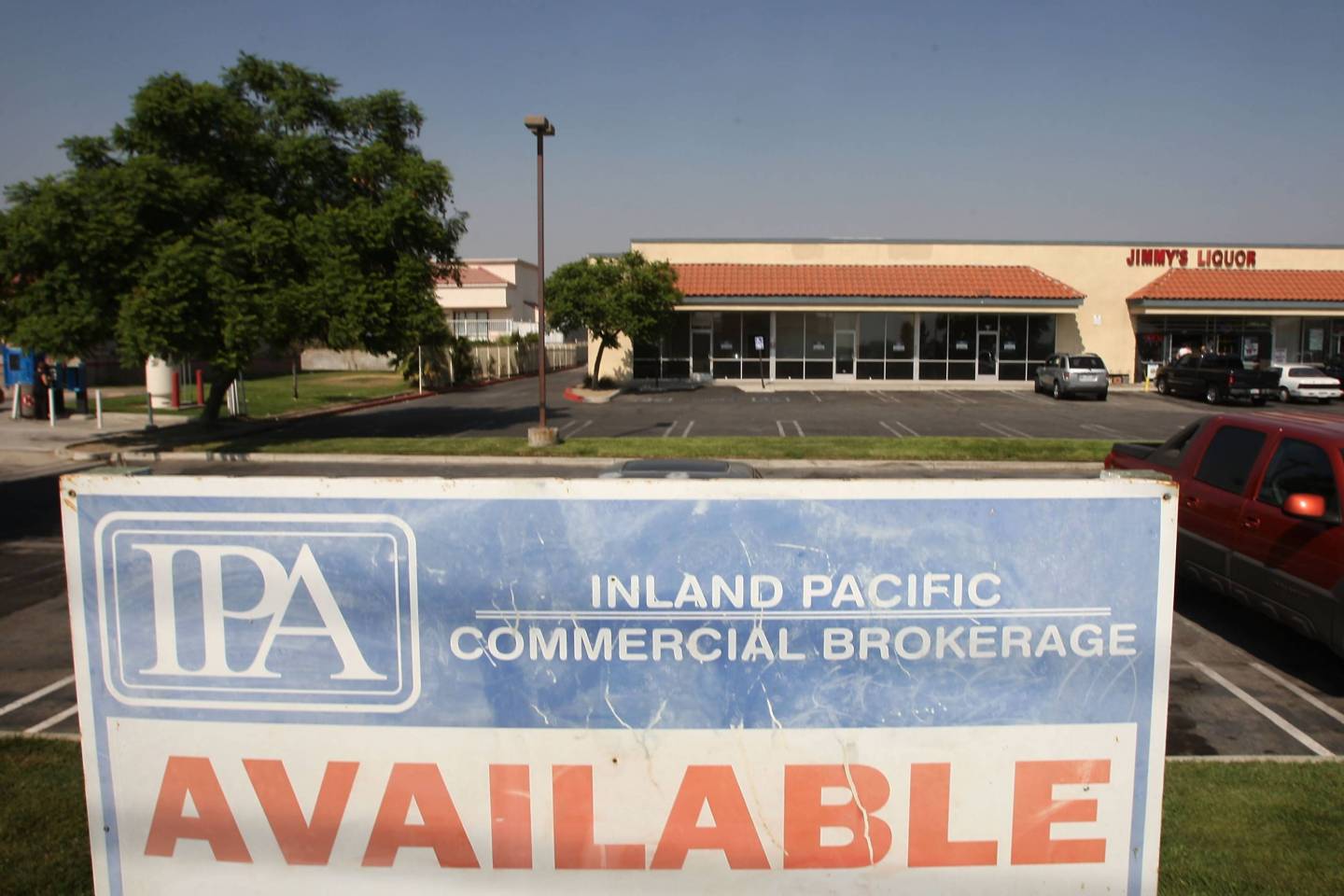 FONTANA, CA - OCTOBER 8: A sign advertising several retail spaces for lease in a shopping mall becomes faded on October 8, 2009 in Fontana, California. Third quarter reports indicate that US strip mall vacancies were at a 17-year high. Vacancies have risen under the decline of the US economy, weak consumer spending and the housing bust. Thirty percent of new retail properties were reportedly less than 50 percent occupied upon completion. (Photo by David McNew/Getty Images)
David McNew—Getty Images

Commercial real estate lenders may have their hands full in the event of a recession, according to a new report.

U.S. lenders have “much greater risk exposure than publicly recognized” to the commercial real estate sector, real estate data firm CrediFi says in the report, provided first to Fortune. The study deems lenders’ exposure to the retail and industrial property sectors as particularly risky in the event of an economic downturn, as well as declining commercial mortgage-backed securities (CMBS) originations that leave more risk on lenders’ balance sheets.

But the real estate data startup describes the MBA’s figures as “misleading and incomplete” in its report, which it says is based on “granular, loan-level data” covering a wider swath of the commercial real estate lending market. That data shows both banks and non-bank lenders have “particularly troubling exposure” to certain ‘at-risk’ sectors, namely both retail and industrial lending,” the report says.

New loan originations on retail and industrial properties combined to surpass $250 billion in 2018, per CrediFi. By contrast, the MBA’s data has that figure at less than $150 billion, which CrediFi says underestimates lenders’ exposure to risks such as a downturn in consumer spending and industrial production.

“Those two segments are so sensitive to the economy and would be very sensitive to an [economic] downturn,” CrediFi CEO Ely Razin tells Fortune.

Razin echoes the report’s sentiment that “a downturn is coming”—citing a 4 percent decline in lending volumes last year, according to CrediFi data, as indicating that lenders are starting to pull back amid “concerns about an added level of risk in the market.”

“This is a very long economic cycle, and if you’re a believer that the downturn is coming sooner rather than later, the risks are imminent,” he adds.

Jamie Woodwell, the MBA’s vice president of research and economics, disputes CrediFi’s findings that there is more risk in the commercial real estate lending market than recognized. He cites “incredible transparency” into the debt held by banks via disclosures by the Federal Deposit Insurance Corporation (FDIC) and the Federal Reserve, as well as commercial and multifamily mortgage delinquency rates that “are at their lowest levels in history.”

Woodwell acknowledges that the MBA and CrediFi are “measuring different things” when it comes to their tracking of commercial real estate loan data. He says the MBA focuses its research on the financing of “income-producing” properties usually leased from one party to another, while eschewing data on “owner-occupied real estate”—the kind that businesses often use as collateral on commercial & industrial (C&I) loans, which are factored into the CrediFi report.

But Woodwell defends the MBA’s methodology, noting that the group’s data focuses on major lenders “with a dedicated commercial real estate platform” who provide a majority of the market’s financing volume.

The headwinds facing the retail sector have been well-documented in recent years, with the rise of online retail hurting everyone from national chains to mom-and-pop stores. In turn, retail landlords have faced rising vacancies that have diminished cash flows—making it harder to pay off the loans on their properties—and created an overabundance of malls and shopping centers across the country.

While CrediFi did not provide a list of the lenders with the greatest exposure to retail, the MBA’s data for 2018 identified Wells Fargo ($6.35 billion in originations last year), Key Bank ($5 billion), JPMorgan Chase ($3.34 billion), Morgan Stanley ($3.29 billion), and Deutsche Bank ($2.19 billion) as the largest lenders to the sector.

“I do think the banks have a lot of [retail] loans on the books that aren’t going to look so good soon,” according to Mark Fogel, president and CEO of commercial real estate debt lender ACRES Capital. “I think you’ll start to see some distress.”

Industrial real estate, in turn, has proven among the more in-demand sectors in commercial real estate—a dynamic fueled, in many cases, by the same e-commerce companies whose emergence has devastated the brick-and-mortar retail sector. With such companies needing more space than ever to serve their warehousing and distribution needs, investors and debt lenders alike have flocked to the industrial sector.

“What we’re seeing is a fundamental explosion in the demand for anything industrial,” says Warren de Haan, co-founder and managing partner at commercial real estate debt firm ACORE Capital. “The desirability of the asset class is the highest I’ve ever seen it.”

But Razin notes that CrediFi’s numbers also account for debt on more conventional industrial properties, like those used for manufacturing—a sector sensitive to macroeconomic conditions, and particularly so given escalating trade tensions between the U.S. and China—as well as C&I business loans that are backed by companies’ real estate assets (which are not included in the MBA’s data). “It’s not just marijuana farms and Amazon distribution centers,” Razin says of the industrial real estate market’s risk profile.

CrediFi also points to declining CMBS (commercial mortgage-backed securities) volumes as another warning sign, citing figures that show that less than 10% of retail and industrial loan originations in 2018 were securitized. That means that “more of this risk is clustered on the balance sheets of traditional lenders,” according to the report.

Yet debt market participants are also split on the significance of this, given the general drop in CMBS volumes in the years after the financial crisis. Compared to their all-time high of more than $228 billion in 2007, CMBS issuances in the U.S. totaled less than $88 billion in 2017 and fell even further last year to nearly $77 billion, according to data from Commercial Mortgage Alert.

Those pre-crisis CMBS loans, many of which carried 10-year terms, “came due and they’ll never be replaced,” according to Josh Zegen, co-founder and managing principal of commercial real estate debt and equity firm Madison Realty Capital. “That [$228 billion] year in 2007—half of that volume should have never gone into securitization. In today’s world, with risk retention [regulations], you would have never had that [volume].”

Debt market sources also depicted a commercial real estate lending market that has diversified greatly post-recession—with a slew of non-bank debt funds having emerged to fill the void left by banks who have retreated from riskier types of debt, such as construction lending. That’s left the banks in an altogether safer position than they were previously.

“There’s been a de-risking and a lot more discipline in the bank world, for sure,” says Marc Warren, a principal at real estate debt brokerage Ackman-Ziff Real Estate Group. “The banks aren’t levered nearly as much as they were pre-crisis. In addition to tighter regulations and underwriting [standards], they have significantly more capital than they did pre-crisis and can absorb significantly more losses than they could before.”

But that doesn’t mean that alternative, non-bank lenders—who have come to comprise an ever-larger slice of the commercial real estate lending pie—aren’t also exercising discipline of their own.

Jeff Fastov, a senior managing director at one such player, Square Mile Capital, said his firm is “being way more cautious” these days amid concerns that we could be nearing “a turning point” in one of the longest economic expansions in U.S. history. “If things are subject to go one way or another, we’re being more conservative as to how we underwrite deals.”

Fastov also notes that, in general, today’s commercial real estate lenders have been “substantially more controlled” compared to the “aggressive” levels of leverage and pricing being offered to borrowers in the previous cycle.

With the likes of CrediFi raising alarms about lenders’ risk exposure in a maturing economic cycle, that sort of discipline could bode well—should things take a turn for the worse.

This story has been updated to include comment from the Mortgage Bankers Association.