Allbirds Is Flying High–And Adidas and Nike Are Taking Notice 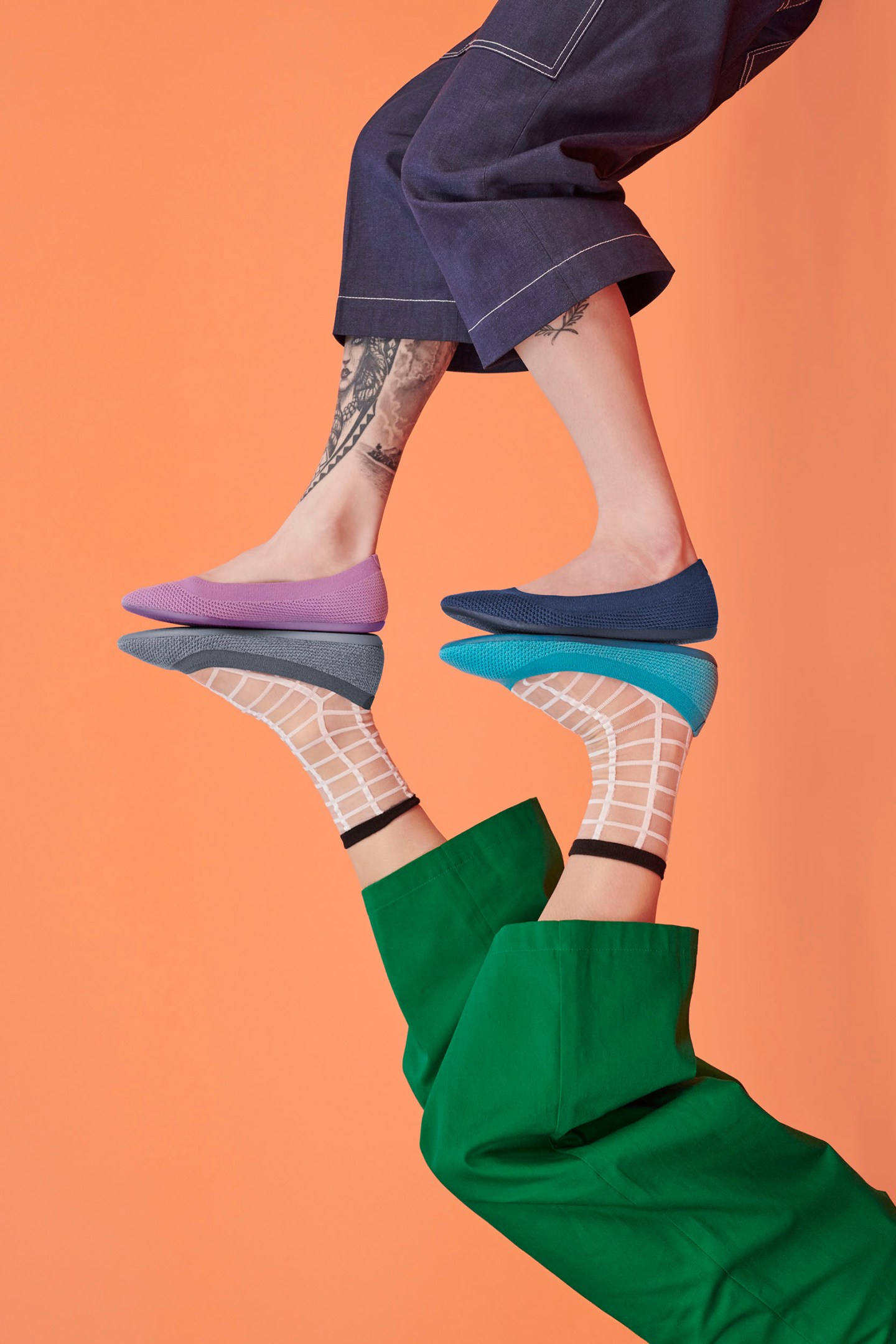 It’s noon on a sunny Friday in San Francisco’s Jackson Square neighborhood and the Allbirds store, nestled in the shadow of the Transamerica Pyramid, is buzzing. Filled with tech bros and soccer moms, twentysomethings and retirees, most were returning customers, there to pick up a second or third pair of Runners, the now nearly ubiquitous monochrome wool sneakers, touted for their supreme comfort and selling for $95 a pair. In just three years, the aggressively normcore shoes have taken over San Francisco, to the point where this reporter spotted them on a hip designer dad, a pair of coffee shop brogrammers and a mom-of-three allergist all in one day.

The flat, named the Tree Breezer, is constructed from an extremely light eucalyptus fiber and has the same merino wool insole and bottom sole (made from a carbon-negative sugarcane substance) as Allbirds’ other styles. It currently comes in four colors (with additional hues in the pipeline): navy, gray, and the brighter pink and turquoise. “This feels like I’m wearing a sock,” one young blond woman exclaimed as she slipped into a pair. Nearby, a doctor in scrubs, admired her foot in a gray flat in the mirror. “I’m on my feet all day and these look cuter than what I would normally be able to wear,” she commented.

In Allbirds natural habitat–Instagram–the company has acquired some 258K followers, and regularly posts dreamy images of lambs nibbling each other’s ears and electric-hued New Zealand lakes. On May 7, just days after launching the new line of flats, Allbirds posted a picture of three blurred-out pairs of the new flat with “BRB” superimposed on top: “Be right back! Our first batch of Tree Breezers are gone, but reinforcements are on the way!” And indeed, on their website, the shoe is sold out in all sizes and in all four colors. A call in to the company confirms there are a few pairs left in the retail locations and the flat will be fully restocked online in June.

Allbirds was launched in 2016 by Tim Brown, a former professional soccer player, and Joey Zwillinger, an industrial engineer who worked in biotech. Brown had raised almost $120,000 in five days in a Kickstarter campaign he launched in 2014 to produce the Runner, the woolen sneaker, envisioned to be worn sockless, “that controls odor, regulates temperature, repels water, wicks away moisture and resists stains and dirt. And, a sustainable resource!” Brown joined forces with Zwillinger soon after, opened their San Francisco headquarters and now helm a company that has nearly 200 employees.

The company name is a reference to Brown’s native New Zealand, where the first Western settlers noticed the lack of mammals and thick population of birds. Allbirds’ sustainability ethos, which is part of the brand’s appeal to many of its customers, is a commonality it shares with Rothy’s, another small San Francisco-based, direct-to-consumer shoe company that weaves its shoes from recycled plastic bottles. At the Footwear News conference that just took place in Miami, NPD Group analyst Beth Goldstein noted that Zwillinger’s talk included encouraging other footwear brands to leverage the same materials Allbirds is using.

The privately-held Allbirds has an estimated value of $1.4 billion–putting it squarely in Unicorn territory–and had $100 million in revenue in its first two years, according to the Wall Street Journal. The company, which Axios reported was profitable in its first year, says it sold 1 million pairs in that time period and reached its 1 millionth customer two and a half years in, illustrating the repeat appeal of the shoe’s comfort. Allbirds most recently completed $50 million in series C funding in October, adding T. Rowe Price, Fidelity Management and Leonardo DiCaprio as investors. With five permanent stores, Allbirds is adding at least two more retail locations in 2019 and is launching in China.

NPD’s Goldstein notes that while Allbirds likely accounts for less than 1% of the U.S. footwear market, “their buzz is much bigger than that.” Cowen analyst John Kernan, who covers industry behemoths like Nike and Adidas, said Allbirds is on their radar. “It’s a different core customer,” he said, but “Nike is aware of how the consumer is viewing the topic of sustainability,” and has started to address this market with new, environmentally-friendly iterations of some of their shoes. Adds Goldstein: “Other brands are noting how much Allbirds’ premise is resonating with consumers, from a sustainability perspective, from a simplicity perspective and from a comfort perspective.”

Indeed, back in the store, a woman in her early 30s, dressed in all-black leggings and tunic dress, was deciding between two pairs of flats. She had popped away from her office on her lunch hour. “These I would wear to work,” she said, circling toes clad in navy at the mirror, “and these I would wear with a dress or out at night,” holding out a pink foot.

She sank into a chair with a furrowed brow to contemplate her decision. In the end, it’s probably inconsequential which she took home–as an Allbirds customer, it’s only a matter of time until both are in her closet.

—Get to know all of the 2020 Democratic presidential candidates

—Who does more housework: married women or single moms?

—Meet Chiquita Evans, who made history in male-dominated e-sports