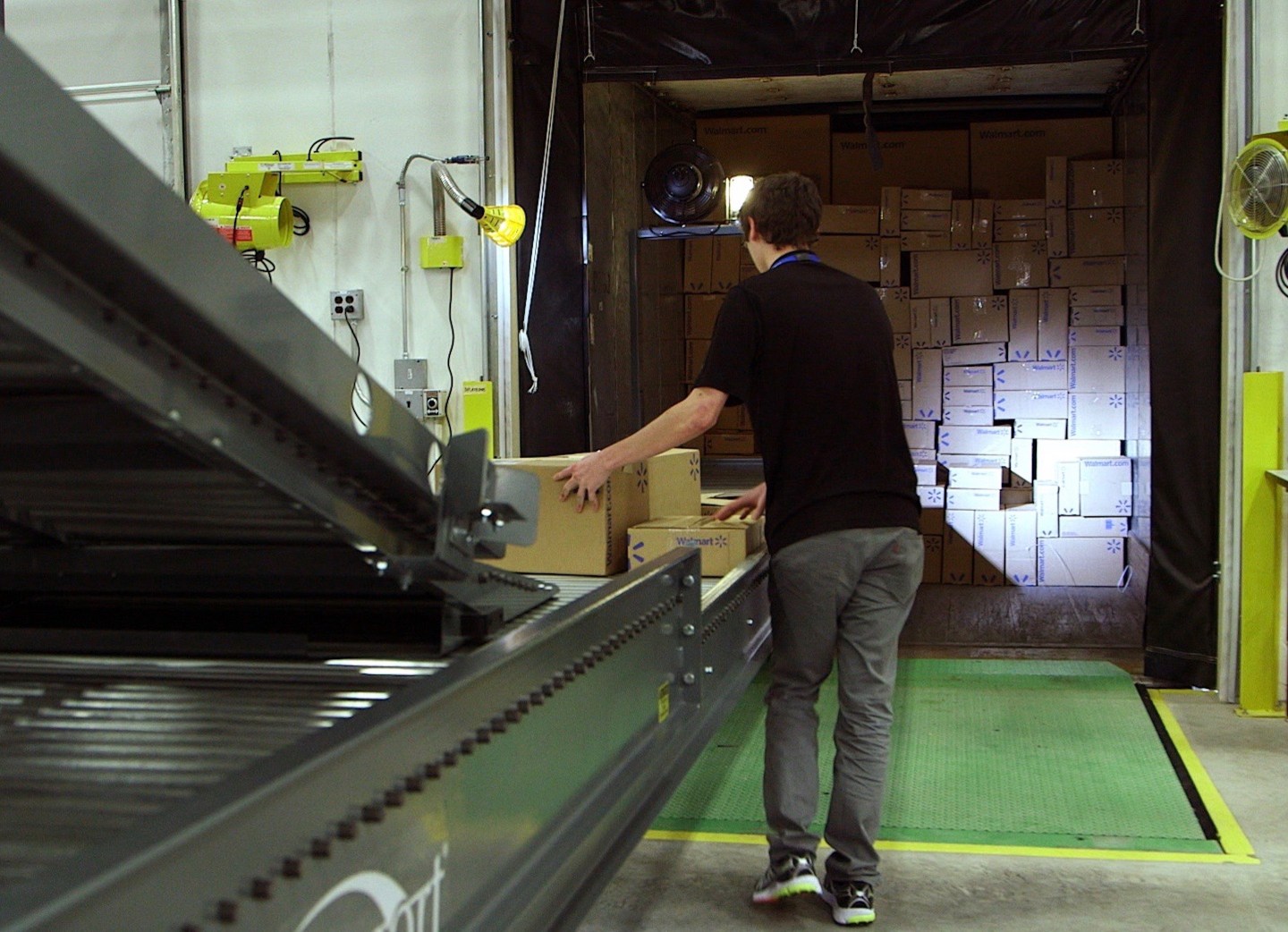 Walmart's is in a good position to offer one-day deliveries to customers since it has a national network of stores and distribution centers.
Courtesy of Walmart

Amazon may have scored points on Wall Street last week with plans to invest $800 million so its Prime member subscribers can receive merchandise in one day. But analysts aren’t concerned the e-commerce giant’s brick-and-mortar competitors like Walmart and Target, with hefty online businesses themselves, have been caught off guard.

Delivery is part of today’s heated skirmish for retail turf, and Amazon simply just made its latest move.

In response, Walmart, with its stock dipping 3% Friday, issued its own news in a tweet, while taking a jab at Amazon.

“One-day free shipping…without a membership fee. Now THAT would be groundbreaking,” the company said, teasing plans to cut its free two-day shipping (for purchases $35 and up) down to one, while making a reference to Amazon’s annual $119 Prime membership.

One-day free shipping…without a membership fee. Now THAT would be groundbreaking. Stay tuned.

Although Walmart—whose stock Monday rose slightly more than 1%—declined to provide Fortune with further comment, research from A.T. Kearney shows the company would only need to add eight additional distribution facilities to its existing 156 to implement one-day service.

Target—which saw its stock drop 5.4% Friday, recovering 3% on Monday—already offers free one-day shipping to its no-fee loyalty REDcard holders. The benefit is for orders of at least $35, which are placed by 7 p.m. on a weekday.

“Amazon’s biggest rivals, Walmart and Target of course have the inherent advantage of thousands of pickup points in their store networks,” John Mercer, global head of research at Coresight Research, told Fortune in an email interview.

According to Mercer, “Amazon’s lack of physical retail infrastructure is the prompt for it to continue innovating in last-mile delivery: It is always looking for ways to erode the inherent friction in home delivery.”

The Retail, Wholesale and Department Store Union, however, released a statement questioning whether Amazon’s fulfillment center employees would be able to safely accommodate switching from two to one-day deliveries, since they are “currently fac[ing] speeds of 200-300 orders per hour in 12-hour shifts.”

This is less of an issue for big box stores that are already located near consumers. As Target’s senior director of communications Joe Poulos tells Fortune, 75% of the population lives within 10 miles of a Target.

The Real Fight Is For Same-Day Delivery

Retail equity analyst John Zolidis told Forbes that Walmart CEO Doug McMillion told him in October “that same-day delivery, not one-day delivery, was going to be the real battleground.”

And Target is among larger retailers that have already made strides toward that goal.

“Today, Target guests have numerous ways to shop same-day and receive their purchases within hours,” Target told Fortune in a statement. “We have a range of options that make shopping easy and convenient, including our in-store shopping experience and delivery from Shipt in nearly 250 markets.”

Target acquired same-day delivery service Shipt in 2017 for $550 million. Although the company delivers goods for other companies—partnering with 60 national and regional retailers, including Costco and Piggly Wiggly—Target consistently expands what Shipt delivers for their big box stores.

Similar to Amazon Prime’s membership fee model, Shipt provides its free delivery services to Target consumers for $99 a year or $14 a month, with 50% promotional discounts often available. Members can then order groceries or retail goods online that Shipt personal shoppers will buy at nearby stores, delivering them to consumers at no additional fee.

Poulos also said Target had more than two million Drive Up orders— a free service that allows consumers to order items from a local Target online, pull up to the store’s parking lot about an hour or two later, and then have an employee deliver merchandise directly to their cars within two minutes. It’s currently available at more than 1,100 stores across the country.

Can Smaller Retailers Catch Up?

“The data would suggest that in today’s customer-centric environment, consumers both prefer and are getting accustomed to one-day or same-day delivery,” Michael Kim, vice president of Data and Analytics at global consulting firm AArete tells Fortune via email. “From a consumer lens, this is the new normal.”

While large companies like Walmart and Target have the infrastructure to adapt to quick deliveries, such might not be the case for smaller retailers.

“From a company lens, this would only benefit large retailers with a strong e-commerce platform, strong supply chain, and most importantly high frequency of orders to offset these supply chain costs,” Kim said. “Therefore, it may not be the new normal for all retail companies.”