Welcome to The New Era of High Fashion and Video Game Collaborations: Inside Moschino and The Sims Partnership 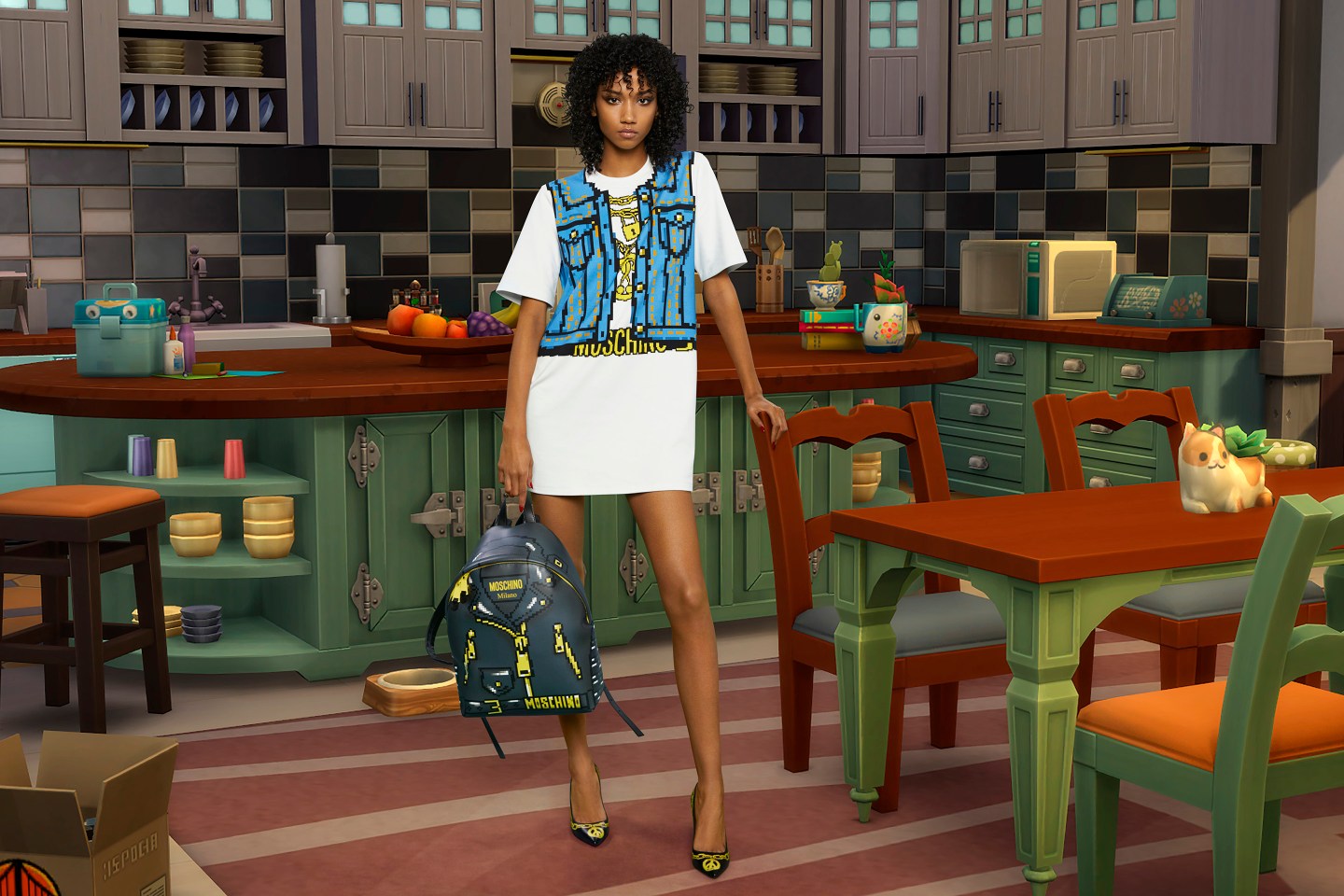 model (right) wearing an in-game and IRL top from the Sims and Moschino capsule collection. Moschino
Courtesy of Moschino

Starting this week, a couture-minded swath of The Sims‘ 80 million-plus players can wear the exact Moschino sweatshirt as their avatar while playing the life-simulation video game, the result of a partnership between Electronic Arts and the Italian designer. But while a Sim—or virtual human—can don the luxury pullover free of charge as they run errands or stop by the office, breathing video game fashionistas will have to shell out $595 to buy the real, rather than virtual, hoodie.

Moschino premiered its Sims-inspired capsule collection last weekend during a Coachella desert party, which featured a roller rink, famous DJs, and celebrity appearances, in addition to the catwalk showcasing the designer’s pixelated clothing and accessories. Collection prices range from an $85 phone case to a $1,295 backpack. (And that’s in USD, not Simoleons—Sims currency. The game’s monetary cheat codes cannot be applied in the real world either.)

This is the latest version of high-fashion product placements in video games. Moschino has created an entire collection paying homage to a game, instead of just featuring game characters in marketing campaigns.

“Moschino is an iconic brand and fashion is an essential form of expression within games; this felt to us like a great fit,” The Sims General Manager Lyndsay Pearson tells Fortune.

The partnership further validates the sales potential from virtual reality. “We are seeing the trend accelerate,” says Marie Driscoll, Coresight Research’s managing director of luxury and fashion, in a Fortune interview.

In 2012, gamers were surprised to see Final Fantasy characters appear in a 12-page Prada fashion spread. Five years later, Louis Vuitton decided to welcome Final Fantasy’s Lighting as the face of its own 2017 ad campaign—even tasking the character with press interviews at the behest of the luxury brand.

“Prada and Louis Vuitton’s collaborations were simply early iterations of what is likely to be a growing trend of luxury using collaborations to reach new target audiences and adapt to shifting market conditions,” Driscoll said.

Other luxury brands are creating games of their own to gain brand recognition with younger demographics. Hermes released a mobile game in China last April in which each new level was branded in a different Hermes style. This could be significant for the French luxury house since mobile games play a role in developing the identities of Chinese millennials, Goldman Sachs’ research indicates.

“The fashion and luxury industry has the unenviable task of pleasing two masters,” Dipanjan Chatterjee, vice president and principal analyst for Forrester, tells Fortune via email. “While an aging Boomer and Gen X make up the bulk of value today, Gen Y and Z represent the future lifeblood of this category,” Chatterjee said. He cited a UBS Group AG survey that shows 85% of the growth stems from 18-to-35-year-old consumers, accounting for 45% of the business in about five years.

“The Sims-Moschino-Coachella triumvirate is evidence of a luxury label contorting to stay relevant to the burgeoning consumer base of younger consumers, especially in markets like the United States and China that account for a large share of luxury sales,” Chatterjee said.

From In-Game To IRL Purchases

“My first reaction was excitement,” Deli, a 28-year-old Australian Sims 4 player, who asked to go by her first name, shares with Fortune. Deli’s better known as Deligracy to her 886k YouTube subscribers, who watch her play the game on the video platform. “It’s an exciting avenue for The Sims and gaming in general to enter another sphere of pop culture in high fashion…It’s a marketing opportunity not a merch opportunity. Moschino does a lot of collaborations to saturate their name in the market, perhaps gaming was an area they wanted to dabble in.”

However according to Deli, “I have noticed some of my audience’s reaction was that they were disappointed they couldn’t afford to buy the items, as fans of The Sims.”

I LOVE designer fashion even though I can’t afford it, it’s the aesthetic and creativity I indulge in not literally buying and wearing it.

“The discussion around Sims fans, on Twitter, seems to be disappointed,” costume designer Abby Mudd relates to Fortune via Twitter DM. “A lot of the fans of this game right now, are teenagers, and obviously it’s out of their price reach. A lot of them wish it was done by Forever 21. I totally see their perspective…Though for me, this designer collab is a dream, I do purchase lots of designer pieces, throughout the year.”

Mudd, 30, didn’t hesitate to buy Moschino’s $220 earrings shaped like the game’s iconic Plumbob, a symbol levitating over Sims heads to denote who players are controlling.

Forgot the Moschino x Sims collection was dropping. But was able to get what I wanted the most. pic.twitter.com/IUY9Rcj6dc

“I also wanted the Plumbob swimsuit but it was sold out in my size pretty quickly,” Mudd said. “When I wear the earrings”—which are no longer on Moschino’s site, perhaps due to high demand—”I hope to bring back the nostalgic feelings of this game, to myself but also other people who played this game growing up, and those who do still play.”

Both Mudd and Deli told Fortune that fashion is an integral part of immersing yourself in The Sims, first released in 2000 as a spinoff of the build-your-own-city game SimCity, launched in 1989.

“One of my biggest uses of The Sims was designing my own fashion for the game, that I would later upload and let others download,” Mudd said. “I would spend endless hours creating shirts, and dresses so my Sims all had unique clothes. It might even been what started my budding love of fashion.”

EA has used players’ penchant for design in past branded collaborations as well, including with Sweden’s IKEA home goods retailer and high-end Italian fashion brand Diesel. Pearson told Fortune that in 2007, “When The Sims 2 collaborated with [Sweden’s fast-fashion purveyor] H&M we were actually able to bring a fan-created shirt to life.”

EA announced in February that The Sims 4 reached $1 billion in lifetime revenue and in 2018 gained five million new players.

“It gives the brand reach to a whole new group…A huge new audience of gamers,” she said.

Michael Brown, a partner in A.T. Kearney’s Consumer Products and Retail Practice, told Fortune, “I would not question the video game players’ ability to purchase these products. The demographic runs from pre-teens to 50 year olds.”

Moschino didn’t disclose their sales figures for the capsule collection, and EA hasn’t released the number of times players have downloaded the branded hoodie in the game. And although future in-game collaborations might be in the works, the only current in-game portion of the collaboration is the Freezer Bunny hoodie.

(“The Freezer Bunny is a small but iconic character that first appeared in The Sims 2, actually on a popsicle box in a freezer almost like an Easter egg, and has since showed up throughout our history,” Pearson explained.)

“I always love any excuse for more content and items in the game,” said Deli. “However, I would be disappointed if it’s just one hoodie and there are no plans later down the track for more items from this collaboration.”

On the other hand, Mudd, who describes herself as a “decently serious gaming hobbyist,” hopes this is a sign future high-fashion/video collaborations are in the pipeline.

“I can’t wait to see more designer and gaming collabs,” she said. “I’d love to see a Blizzard designer collab, if it’s Overwatch or World or Warcraft. There’s lots of us who game and love fashion.”