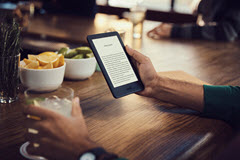 Amazon has announced an addition to its e-reader Kindle line, listed on its website as the “all-new Kindle,” equipped with a built-in front light so users can keep reading in low lighting.

The new Kindle will be released on April 10, and is currently available for pre-order, priced $89.99.

Aside from the front-light, the new model hasn’t changed much from the e-reader’s previous versions, according to The Verge.

Some differences include a 167ppi display, which is less clear than the 300ppi display carried by both the Paperwhite and Oasis versions. The new Kindle also isn’t waterproof.

However, the device does have a longer battery life. In the new Kindle’s description, Amazon boasts of a battery charge that “lasts weeks, not hours.” It also comes equipped with Amazon reading features, including Audible support, Whispersync and Whispersync for Voice, Goodreads, Smart Lookup, Goodreads integration, and Family Library, Engadget reports.

The e-reader market has been mostly on the decline since 2015, but Amazon says demand is still high for their Kindles, according to Wired.