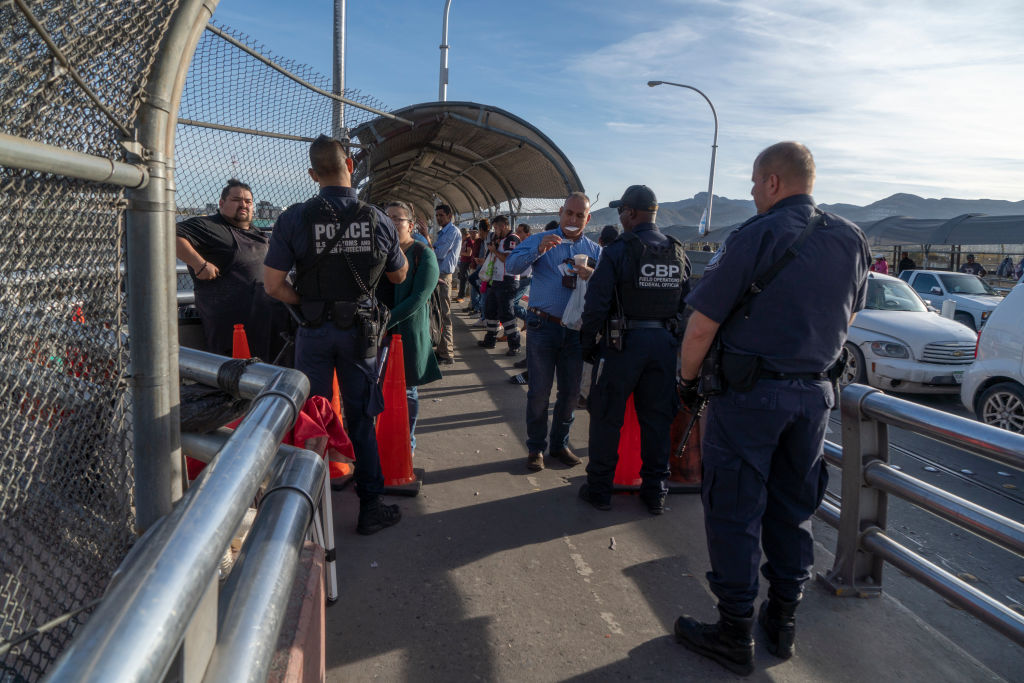 Customs and Border Protection agents check pedestrians' identification to make sure they are carrying visas to cross on November 4, 2018 in Ciudad Juarez, Mexico. - Sending thousands of troops to the US-Mexico border to counter a migrant "invasion," questioning the validity of birthright citizenship, and spreading stories of scandalous murders by undocumented immigrants: Trump and his Republicans are making immigration a closing argument of the campaign. It may be a logical move. Immigration is a top concern among Republican voters, and driving those issue-focused Trump supporters to the polls is key. (Photo by Paul RATJE / AFP) (Photo credit should read PAUL RATJE/AFP/Getty Images)
Paul Ratje—AFP/Getty Images

The federal government has been secretly tracking immigration activists, lawyers, and journalists covering the topic, KNSD-TV, an NBC station in San Diego, reported on Wednesday evening.

Leaked documents from a Homeland Security source showed that the U.S. created and maintained a secret database of activists, journalists, and social media influencers the government had associated with the migrant caravan that traveled from Central America to the U.S.-Mexico border at the end of 2018. Following the event, a number of people who were among the 50 in the database said they seemed to be targeted for higher scrutiny at the border. Most of the people monitored are U.S. citizens.

Early in 2019, two journalists and two immigration rights attorneys who had worked with members of the caravan were denied entry into Mexico, according to the Los Angeles Times. Their passports had been flagged.

The leaked documents show that agents from Customs and Border Protection, Immigration and Customs Enforcement, the U.S. Border Patrol, Homeland Security Investigations, and the Federal Bureau of Investigations all used the database. The use was under a code name of “Operation Secure Line,” which designated the efforts to monitor the caravan.

Also involved was the International Liaison Unit, which coordinates work between U.S. and Mexico intelligence organizations.

Each record had a picture of the person and various information. Some of the images were marked with a red X, indicating that they had been interviewed, arrested, or had a visa revoked.

According to the source, the group that put the database together is a criminal investigation agency and isn’t allowed under law to create dossiers on people.

This isn’t the first report of covert operations regarding the caravan. There were reports in November 2018 that Homeland Security used paid undercover informants to gather information.