A Man on a Mission to Make Humanity ‘Future Proof’ 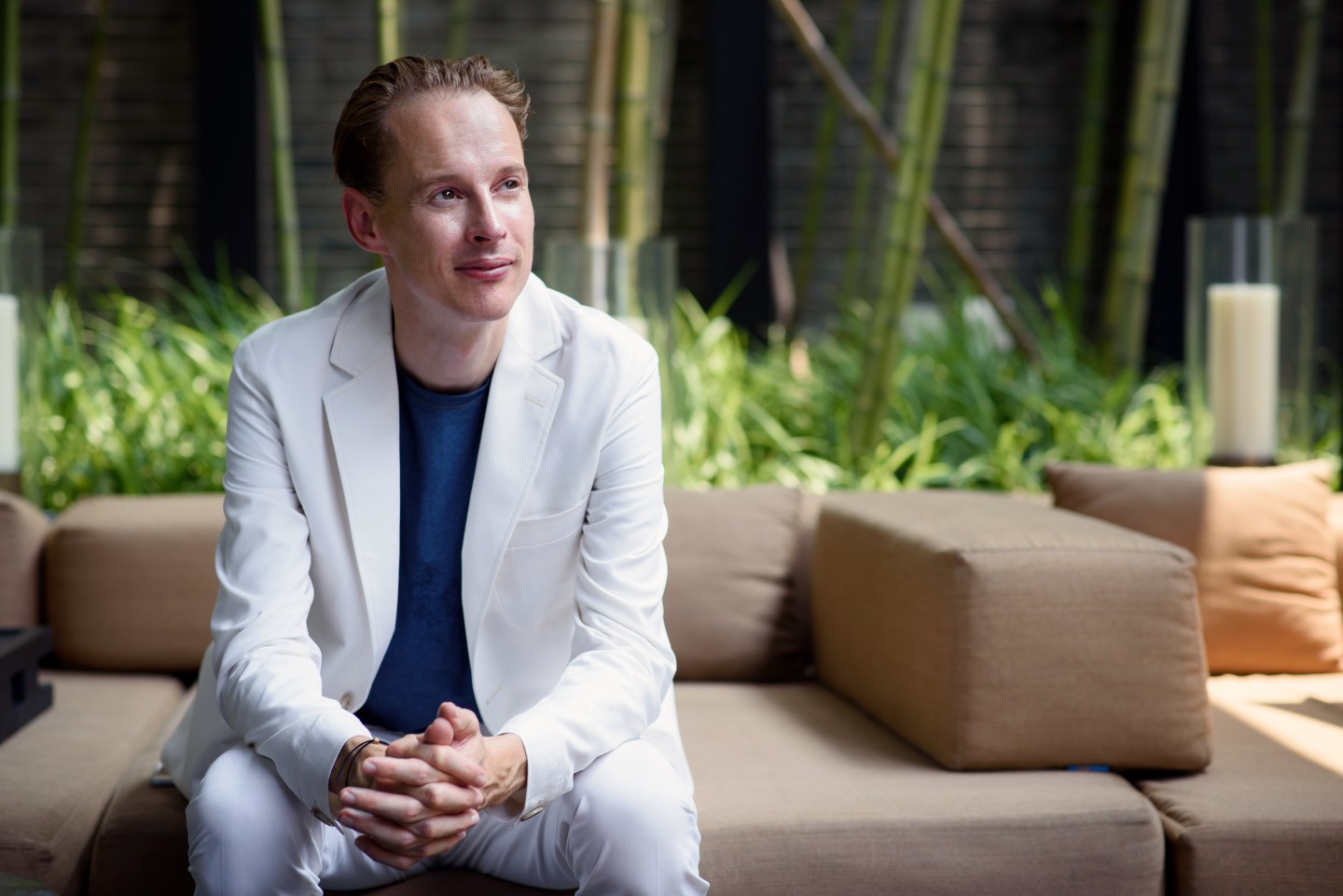 Daan Roosegaarde is on a mission to make humanity “future proof.” He’s not trying to save the planet; he says the planet will save itself. Humans, on the other hand, need a little help. A designer from the Netherlands could be our unlikely savior.

“A lot of the problems we’re facing—rising sea levels, air pollution—are, to me, an issue of bad design,” the eponymous founder of Rotterdam-based design firm Studio Roosegaarde tells Fortune. “We have created this current situation, now we have to design our way out of it.”

When Roosegaarde talks about design, he doesn’t mean it in the classic sense. The solution to our problems is not to make chairs chicer and, if it were, Roosegaarde would be out of luck. By his own admission, he’s no Philippe Starck. Instead, design is about setting goals for our future and creating standards to achieve that vision. Most people would call that “social design” but the Dutch artist and entrepreneur has a different name for it: Schoonheid.

Typical of Dutch words, Schoonheid doesn’t translate easily. It becomes stuck between two meanings, indicating “clean” if talking about the environment or “beautiful” if talking about an aesthetic. But as a mission statement, Roosegaarde says, Schoonheid’s definition is more, well, definite.

Roosegaarde grew up in a country at odds with nature. The majority of the Netherlands is below sea level and flooding is a fact of life. But the Dutch have adapted to embrace the challenge posed by the sea. While early rulers built dikes to hold back the floods, modern planners are creating cities with waterways and parks where the water can pool when the floods inevitably come. In the meantime, those spots are enjoyed as rowing grounds or basketball courts.

“I think this notion of enjoying nature while also trying to upgrade and improve it to make some place livable is something that is in my DNA,” says Roosegaarde.

It’s a trait the designer passes down to his work. Windvogel, for instance, is a project that harvests energy from the sky using kites tethered by luminous strings to dynamos on the ground. As the wind buffets the kite, the motion in the string powers the generators, converting the natural kinetic energy into power. This otherwise imperceptible harvest is reified by the glow of the kite strings, emulating the energy being leeched from the wind.

A less poetic, more practical demonstration would be the studio’s Smog Free Project, which was inspired after one of Roosegaarde’s visits to China, where he also keeps an office. The project’s poster child is the Smog Free tower, which Roosegaarde installed in a Beijing park in 2016. Essentially a giant outdoor air purifier, the tower filters fine particles, 2.5 micrometers in diameter, from the haze to create a pocket of clean air amidst the smog.

Roosegaarde hopes this oasis will become a place where people congregate to breathe freely, sparking spontaneous encounters and the sharing of ideas. It’s an ideal built on the virtues of the public square, a love of which enticed Roosegaarde away from his hometown in the suburbs and into city life.

“I started to question why we build cities that damage us, and that question turned into an irritation,” he says. “Now I’m turning that irritation into solutions. That’s where I am right now. I don’t have the whole answer but this is what I can do to improve. I can design and I can engineer.”

Taking out the trash

When Roosegaarde returned to his studio in Rotterdam after touring his Smog Free Project across China, he spotted an image on the desk of one of his designers that looked like a Jackson Pollack painting. Just specks of white scattered across a black background, Roosegaarde was drawn to what he describes as the obscene beauty of the image.

“It was space waste,” he reveals. “A snapshot of the 8.1 million kilos of space junk floating around planet Earth.” There are over 20,000 trackable pieces of trash floating around the Earth. Some of it consists of disused satellites, other bits are chips of paint that have flaked off of shuttles. In a few decades the debris could be so dense that it prohibits the use of low orbit satellites, spelling disaster for global telecoms.

The cosmic clutter inspired Studio Roosegaarde’s latest project, the Space Waste Lab, which is searching for a solution to that great landfill in the sky. Phase one of the project – a series of workshops welcoming amateurs and experts to propose solutions – is coming to an end. Phase two, when one of those proposal will be taken and turned into a workable product, will commence on January 19.

“It’s beautiful to see how an abstract inspiration is becoming a real project with real deadlines, a real budget and real solutions. That’s really fascinating for me, personally.” Roosegaarde has partnered with the European Space Agency (ESA) and NASA to pull off this feat. The ESA already had a clean space program in the works, but Roosegaarde brought a new perspective.

“It’s not that I’m smarter than NASA or ESA, because I’m not,” he claims. “Those people are really, really smart. But I can look at a piece of space waste and say maybe it’s not waste. Maybe I can attract it to the earth with a net and make artificial falling stars from it as a replacement for fireworks.”

That idea might not work, but in ‘phase one’ of all Roosegaarde creations, efficacy doesn’t matter. Roosegaarde loathes early skepticism. In fact, the only chair Roosegaard has designed, called the “Yes, but…” chair, gives clients an electric shock whenever they cast doubt during an early pitch. Phase two is when practical concerns are allowed to be introduced.

The electric chair is supposed to inspire creativity, which is the trait Roosegaarde thinks will be humanity’s salvation as we not only fend off the creeping catastrophe of climate change and the threat of being encased by space waste, but as we also advance further into the age of AI.

“I think yes we will live in this hyper technological world, but I think that means that our human skills will be even more important,” Roosegaarde believes. In a word, those human skills are creativity. As robots take over more manual and even cerebral roles, Roosegaarde says creativity will be our true capital.

The World Economic Forum agrees, nearly. It ranks creativity, below critical thinking and complex problem solving, as the third most important skill employees need in order to thrive during the fourth industrial revolution. When the WEF ranked skills for success in 2015, creativity came in at number 10. Meanwhile LinkedIn’s annual desirable skills list predicts creativity to be the most in demand ‘soft skill’ for the year ahead.

Roosegaarde’s personal conversations with CEOs confirm the surveys. Companies want creative people, but people also want creative companies. That doesn’t mean companies with an excellent graphics or UX department. It means corporations with a mission statement that provides employees with a sense of value beyond their salary.

That’s not a new idea. Silicon Valley has always prided itself on its lofty ideals, such as Google’s unofficial slogan, “Don’t be evil”. That slogan has receded from Google’s code of conduct as the company has matured, but the decree still resonates with employees who, over the past year, have signed petitions and submitted resignations in protest of projects that they feel are drifting into the territory of ‘evil’.

Roosegaarde treats the Google walkouts as emblematic of the future. “We will live in a world where if you don’t have purpose or value, your employees will just leave. It doesn’t matter how much money you give them.”

To that end, Roosegaarde wants to see designers and entrepreneurs collaborate on chartering a course for the future, believing businesses, rather than governments, will be the drivers of change.

“We need to invest in new ideas to survive. We have to redefine our goals, our values and then we just have to get to work and invest in them. Once we start embracing that new definition of design we will see that it’s all a part of us being future proof as humans.”

Subscribe to Business by Design, Fortune’s newsletter about the transformative power of design in business.