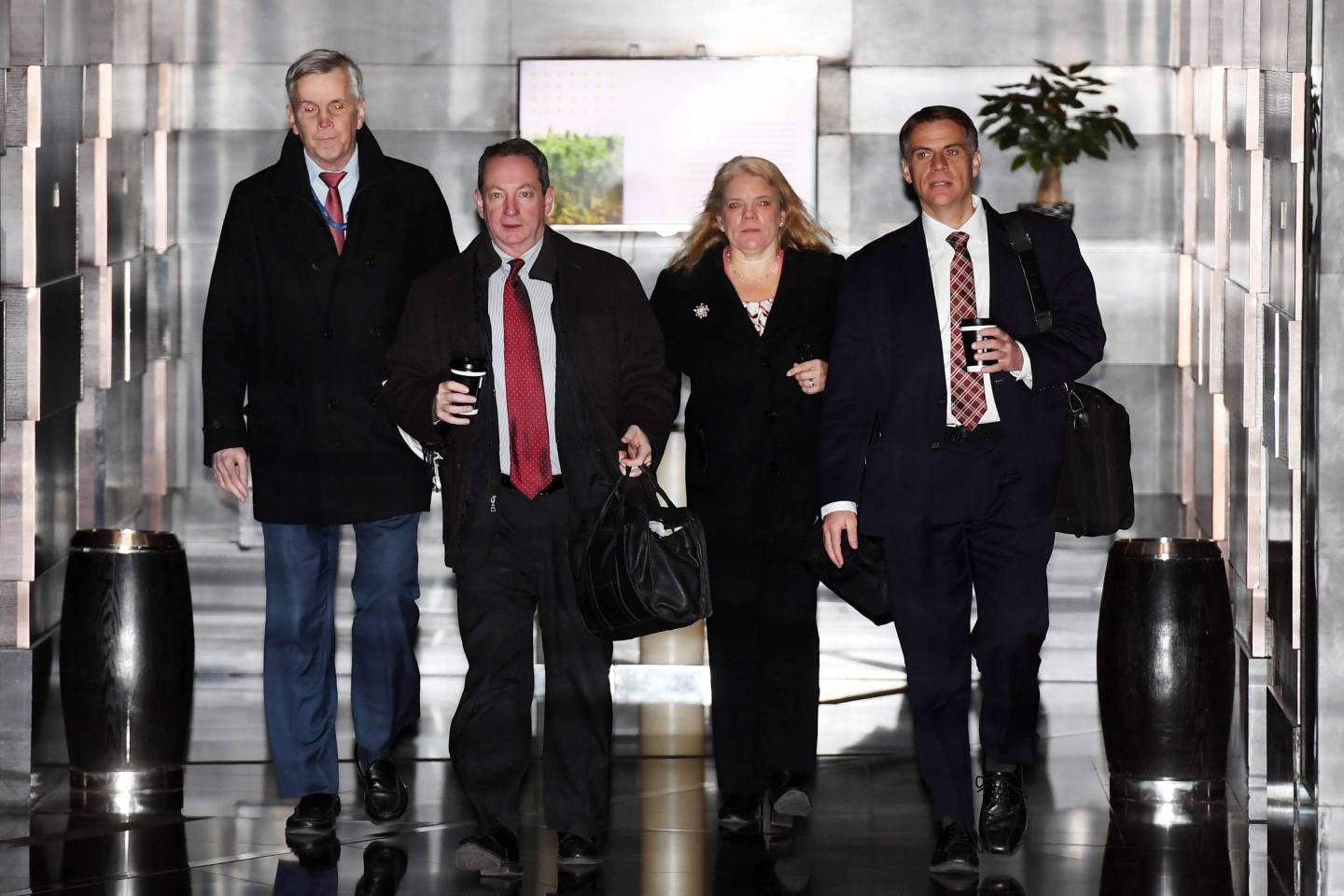 Members of a US negotiation team leave a hotel for the second day of talks in Beijing on January 8, 2019. - The US delegation in Beijing includes officials from the Treasury, Commerce, Agriculture and Energy departments. The talks come a month after US President Donald Trump and his Chinese counterpart Xi Jinping agreed to suspend a planned tariff hike for three months to give negotiators space to reach an agreement and end a dispute that has roiled world markets. (Photo by GREG BAKER / AFP) (Photo credit should read GREG BAKER/AFP/Getty Images)
Greg Baker—AFP/Getty Images

The world’s two biggest economies are separately struggling to come in for unparalleled, simultaneous soft landings, an effort complicated by the trade war they’re waging at the same time.

It’s hard enough for the U.S. or China to pull fiscal and monetary levers to manage a step-down in growth alone. For the two to try to do it concurrently makes what is already “a fairly narrow target even narrower,’’ said Deutsche Bank Securities’ chief economist Peter Hooper.

A misstep would also turn what’s supposed to be a controlled touch down of their economies into something much worse — a worldwide recession. While most economists say that’s unlikely, they acknowledge that it can’t be ruled out, especially if the temporary trade truce between the two countries breaks down or if equities keep sliding.

“If we get an escalation in trade tensions and another 10 to 15 percent drop in the stock market, you’re looking at enough of a tightening in financial conditions to say that a global recession is a real risk,’’ said Hooper, a former Federal Reserve official.

The attempted maneuver by the Fed and Chinese authorities comes as the global economy enters 2019 showing signs of slowing, with the world’s No. 4 economy, Germany, flirting with a recession. Complicating the task is President Donald Trump. He has welcomed China’s economic troubles as giving him added leverage in trade talks with the Asian country, while he’s attacked Fed Chairman Jerome Powell for trying to slow the U.S. economy with interest-rate increases.

See What Our Economists Say:

The U.S. and China started 2018 with very different dynamics at work. The U.S. was poised for a fiscal boost. China faced a deleveraging drag. In 2019, with U.S. fiscal tailwinds fading, and China going slow on deleveraging, they are closer together. The trade truce reduces the risks, but both still face a year of slower growth.– Tom Orlik, Bloomberg Economics

Policy makers are cognizant of the dangers and are acting accordingly. Speaking to economists in Atlanta this month, Powell raised the possibility of a pause in the Fed’s rate hiking campaign and a change in its balance-sheet reduction plans in response to the downside risks that investors perceive to the economy.

China, meanwhile, continues to roll out measures to put a floor under its economy, including last week’s announcement of a cut in the amount of cash lenders must hold in reserves that freed up a net 800 billion yuan ($117 billion) of liquidity. The Finance Ministry is set to propose a small increase in the targeted budget deficit for this year, people familiar with the matter said.

Maintaining expansions in a gross domestic product is tricky because authorities have to walk a fine line between slowing the economy just enough to prevent overheating or financial excesses but not so much as to cause a contraction.

Indeed, the Fed has arguably only accomplished the feat once, in 1994 and 1995, and even then there was a lot of collateral damage, including a hard landing for the bond market. China managed a slowdown in 2015 by ramping up spending, a tactic that cushioned growth but accelerated a build-up in debt that economists warn is unsustainable.

Trump has befogged the Fed’s task this time around first by juicing growth in 2018 with tax cuts and stepped-up government spending, and then by effectively acting to restrain it in 2019 as his trade war rhetoric spooked businesses and investors.

The president’s unrelenting attacks on the central bank also hurt because they threaten to undermine the Fed’s standing with investors and the American public.

“Obviously the president has the right to comment on the Fed, but I would worry that if it continues or intensifies that it could undermine confidence in the Fed — and the market confidence in the Fed’s judgment,’’ former Chair Janet Yellen said in Atlanta, in a rare joint appearance with Powell and ex-Fed chief Ben Bernanke.

And while Trump has cheered China’s slowdown, Powell and the Fed are concerned about it spilling over into financial markets and the U.S.

Seeking to allay investor fears of a Chinese hard landing, Powell told the American Economic Association’s annual meeting last week that the country’s authorities are responding to signs of weakness in their economy with additional stimulus.

“China and the rest of emerging Asia should continue to expand at a still solid pace this year,” Powell said.

Some of the deceleration in China’s economy was self-induced as policymakers sought to dampen frothy property markets, curb leverage and crack down on shadow banking.

“We had been expecting the slowdown for quite some time,’’ Louis Kuijs, chief Asia economist at Oxford Economics in Hong Kong, told Bloomberg Television.

What did surprise China was Trump’s assault on the country’s mercantilist economic policies, resulting in tariffs on some $250 billion worth of Chinese exports to the U.S., Hensley said. That threatened a bigger downshift in growth than China wanted.

Chinese officials have responded with selective stimulus measures to try to prop up growth while eschewing their traditional approach of opening up the credit spigots.

Cliff Tan, MUFG Bank Ltd.’s East Asia head of global markets research, said that China may no longer be able to engineer a soft landing of its economy.

“China may see a very rocky landing, lasting five to six quarters,’’ he wrote in a report to clients. “The primary driver of China’s slowdown is not the trade war, but local credit problems.’’

Either way, the ability of both nations to guide their economies will dominate the global outlook through 2019.