‘Party Like it’s 1923’: New Out-of-Copyright Works and Where to Find Them 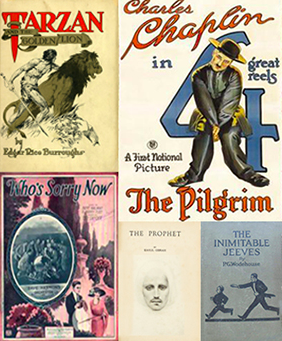 The year 2019 got off to a sweet start for librarians and copyright nerds as a slew of books, films, and music compositions entered the public domain in the U.S. for the first time in 21 years.

The works, which include poetry by Robert Frost and novels by Agatha Christie and Joseph Conrad, are out of copyright, which means anyone can use them without fear of a nasty letter from intellectual property attorneys.

The public domain, of course, is not a new concept—it’s what makes works by Shakespeare or Beethoven available to all—but, in the United States, it has been dry since 1998.

In that year, Congress passed a law extending the term of copyright protection by 20 years, meaning the 1923 works that would have come into the public domain in 1999 got locked up for two more decades. (Critics have derided the law as the “Mickey Mouse Protection Act” in response to lobbying by Disney, which sought to prevent a film depicting Mickey from entering the public domain).

The drought is now over, however, which led librarians and activists to celebrate on social media over the arrival of 1923 works:

As for getting your hands (or smartphones, e-readers, etc.) on the works themselves, websites are highlighting some of the best cultural goodies. These include Duke University’s Center for the Study of the Public Domain, which has a list of prominent 1923 books (such as Kahlil Gibran’s The Prophet), films (The Pilgrim by Charlie Chaplin) and songs (“Yes, We Have No Bananas!”).

Meanwhile, a scholarly repository known as the Hathi Trust has made over 50,000 titles from 1923 available:

You can also find the newly-available works on non-profit sites like Project Gutenberg and the Internet Archive, or on Google Books’ website and via the company’s Books app, which lets Android users download the books to their phones or tablets. On Amazon’s Kindle service, the 1923 works do not yet appear to be available for free, though many other public domain works can be found there for free or less than $1.

This is just the beginning. The first of January, 2020, will see another bonanza of works enter the public domain, including famous novels like F. Scott Fitzgerald’s The Great Gatsby.

In the meantime, to celebrate the return of the public domain and the winter season, here is a famous Robert Frost poem newly out of copyright:

“Stopping By Woods on a Snowy Day”

Whose woods these are I think I know.

His house is in the village though;

He will not see me stopping here

To watch his woods fill up with snow.

My little horse must think it queer

To stop without a farmhouse near

Between the woods and frozen lake

The darkest evening of the year.

He gives his harness bells a shake

To ask if there is some mistake.

The only other sound’s the sweep

Of easy wind and downy flake.

The woods are lovely, dark and deep,

But I have promises to keep,

And miles to go before I sleep,

And miles to go before I sleep.

An earlier version of this article misidentified the subject of the film The Pilgrim.