COVID VaccinesReturn to WorkMental Health
Health ·Business in the Cloud 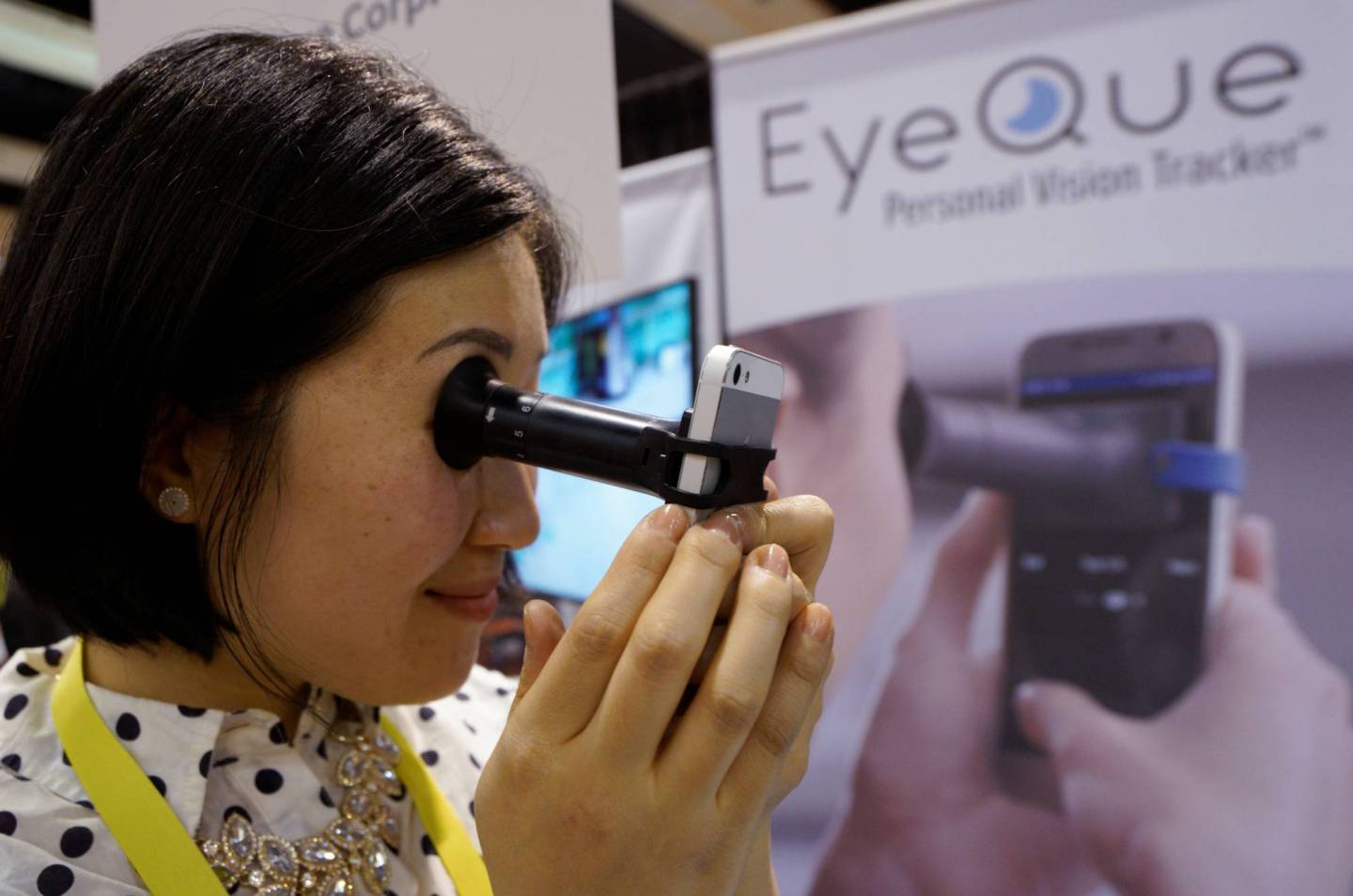 Smartphones have revolutionized how we monitor our health by giving us apps that do things like tracking the number of steps we take, helping us eat better, and analyzing our sleep patterns. But ironically, the device we stare at— hours daily, for many people—hasn’t done much in terms of helping us see better.

A startup called EyeQue is hoping to change that with a device that lets people use their phones to test their visual acuity at home, something that not long ago could only be done by optometrists. Users attach the device to their smartphones and then look through it to measure their vision so that they can order glasses online.

Users must move red and yellow lines they see through the device until those lines overlap to form a yellow bar. The amount of movement necessary for the lines to overlap corresponds to their refractive error (the shape of their eye that doesn’t bend light correctly, resulting in blurred vision).

To date, the devices have run roughly 50,000 tests, says EyeQue.

The calculations are done—and stored—in the cloud. And the company suggests users take at least three readings at different times on different days. The process, which takes just moments to complete, is more accurate than what is typically provided by an in-person appointment with a local eye doctor, the company says.

“The reason for that is when you go to the eye doctor, it’s one moment in time,” says John Serri, chief operating officer and chief technical officer of EyeQue. “You may be having a bad day. You may be nervous. The doctor may be in a hurry. What we do is different measures over time. We’re able to average it out. and we get a better result.”

That said, Serri emphasizes that EyeQue isn’t meant as a replacement for optometrists, who also check for problems like glaucoma, macular degeneration, and cataracts. And the results given for sphere, cylinder and axis—the three key readings required to get the proper lenses—are explicitly not called prescriptions, since those (technically) can only be written by a doctor, but they can still be used with some online eyeglass vendors.

Still, some optometrists who are familiar with EyeQue, say they believe the tool could actually encourage people to visit medical professionals more than they otherwise would.

“I think that the EyeQue, used correctly and regularly, could actually speed up identification and treatment of pathology due to more frequent screening at home,” says Paul Gibson, an optometrist in the UK who is familiar with EyeQue.

He expects that the service will add tools like artificial intelligence that could alert users to potential problems and measure reaction speed. Users could then be alerted to seek care from an optometrist and get help booking the appointment.

There are other advantages, like price. A personal vision tracker sells for $30; an updated version expected next year will likely cost $50 to $70. That’s less than what many people fork over as co-payments for their optometrist visits.

Users must also register for an EyeQue account ($4.99 per year after the first year), which lets them store their data and any customized reports about their vision in the cloud. In that way, they can more easily share that information with their optometrist.

Gibson said that users who have their data can avoid a 10-minute evaluation with their optometrist. It’s just one example of how services like EyeQue, or competitors like Visibly or Lensabl, reduces “the massive friction” in getting vision measurements for buying glasses or contact lenses, he said.

Not every optometrist is yet ready to sign on fully to the technology. Dr. Michael Repka, clinical spokesperson for the American Academy of Ophthalmology, says there are several companies offering refraction testing, though he hasn’t heard of any that use mobile phones. And while it certainly seems to be a welcome evolution to the industry, there are limitations.

“This is what consumers clearly want—the ability to see this themselves, then use that information to go seek professional care,” says Repka. “It’s certainly not something that’s appropriate for young children, though—and [EyeQue is] not marketing it to them. I [also] don’t know how well these systems will do for older patients who have retinal issues or cataract issues.”

Serri, from EyeQue, says he’s also aware of the challenges in terms of trust surrounding the start-up at-home eye exam industry, and by extension EyeQue. That’s why, he says, the company is focusing less on marketing and more on developing professional relationships, including becoming complaint with HIPAA, the healthcare industry’s privacy rules—something it currently is not.

“There’s not much happening in the eye care business in telemedicine,” Serri says. “But the people we’ve talked to show a lot of interest in it. … This is a brand new market [though]. We’re bringing out something that changes behavior in consumers. … We’re not in a rush. We’re putting more effort in defining our technology rather than pushing large scale marketing efforts.”