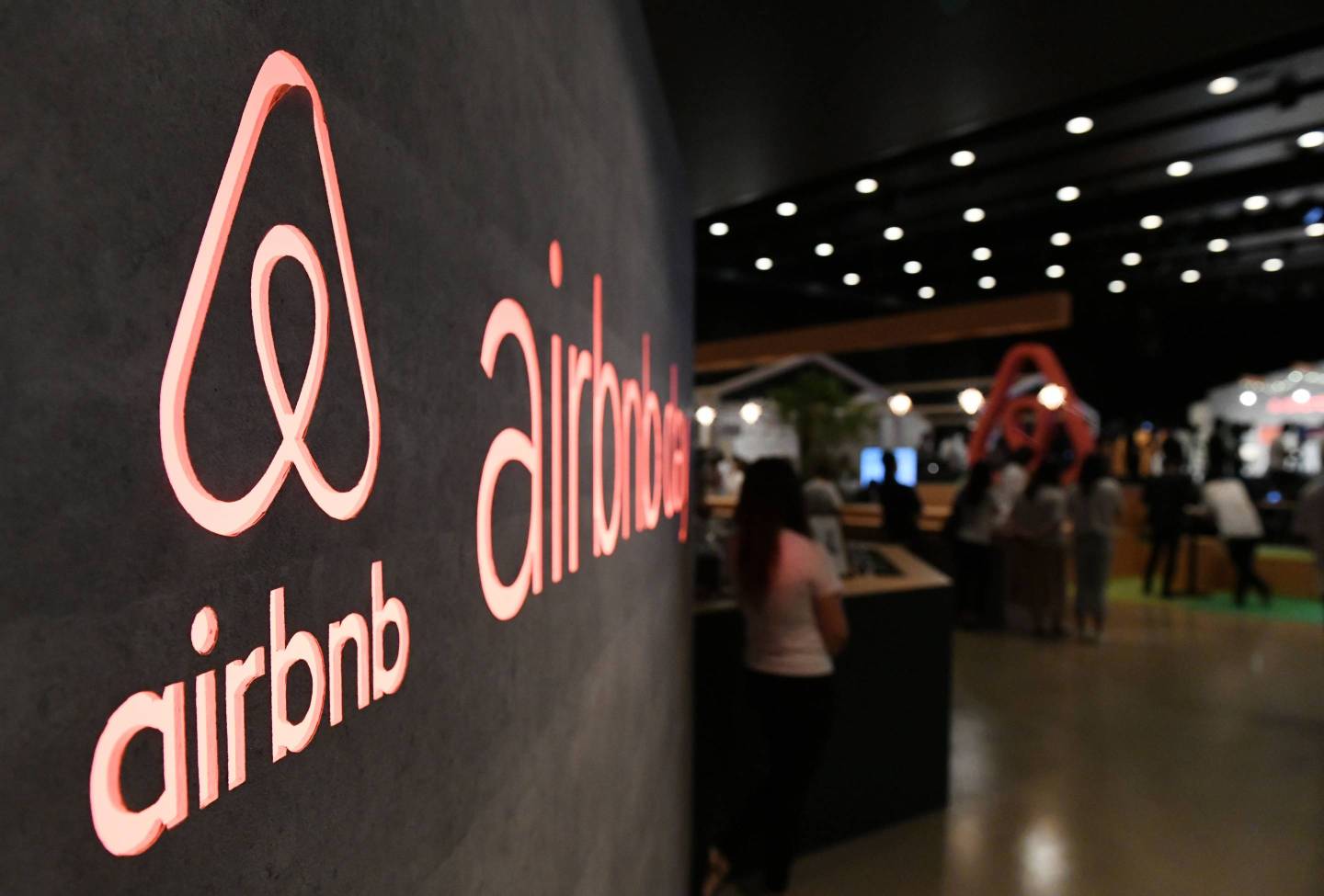 The US rental site Airbnb logo is displayed during the company's press conference in Tokyo on June 14, 2018. (Photo by Toshifumi KITAMURA / AFP) / The erroneous mention[s] appearing in the metadata of this photo by Toshifumi KITAMURA has been modified in AFP systems in the following manner: [2018] instead of [2019]. Please immediately remove the erroneous mention[s] from all your online services and delete it (them) from your servers. If you have been authorized by AFP to distribute it (them) to third parties, please ensure that the same actions are carried out by them. Failure to promptly comply with these instructions will entail liability on your part for any continued or post notification usage. Therefore we thank you very much for all your attention and prompt action. We are sorry for the inconvenience this notification may cause and remain at your disposal for any further information you may require. (Photo credit should read TOSHIFUMI KITAMURA/AFP/Getty Images)
Toshifumi Kitamura—AFP/Getty Images

Eighteen Americans, most dual-Israeli citizens who live there, sued Airbnb (AIRBNB) on Nov. 28 over its intention to remove listings from the disputed West Bank occupied by Israel. The lawsuit filed in federal court in Delaware alleges that Airbnb violates the U.S. Fair Housing Act by discriminating on religious grounds.

The plaintiffs’ lawsuit hinges on making the case that Airbnb’s delisting intentionally affects predominantly or entirely property renters who are Jewish, Israeli, or both. Airbnb didn’t provide a breakdown by nationality or religion of the affected listings, and neither did the lawsuit. It’s unknown if any Palestinians or non-Jewish Israelis rent out property there.

The lawsuit asks a court to declare Airbnb’s actions in violation of the Fair Housing Act, to provide compensation for lost revenue and cover legal fees, and to block future discrimination against “Jews and Israelis.”

A spokesperson told Fortune that Airbnb has over 20,000 hosts in Israel, and that it believes the lawsuit will fail in court. The spokesperson noted, “Major US-based multinational hotels do not offer accommodations in these settlements.”

A class-action lawsuit over discrimination was also filed Nov. 23 in an Israeli court, according to the BBC, initially naming a single home-renter in the West Bank. The government of Israel encouraged those renting homes to sue Airbnb following the company’s announcement on Nov. 19.

Airbnb said in its announcement that it was also re-evaluating its policies about allowing “hosts,” individuals who use its service to list rental homes, to list properties in regions in which the listings may contribute to “human suffering” and send a political message simply by being offered. It also raised the issue of safety. However, critics have called its action hypocritical, as the West Bank was the first and only such region from which Airbnb has so far withdrawn under these revised guidelines, although it previously removing listings in Crimea due to international sanctions.

Most countries and the United Nations view Israeli settlements in the West Bank as illegal, and the U.S. has in the past criticized Israel for allowing and encouraging them. Even the full-voiced support of Israel by the current U.S. administration is tempered by President Donald Trump warning Israel in February about settlements complicating future peace negotiations with the Palestinian Authority. However, Airbnb had previously allowed listings in the area, regardless of nationality. About 2.6 million Palestinians and 500,000 Israelis live in the West Bank. The region’s status has a complicated history, to say the least.

About 200 listings will be removed. The 11 plaintiffs who own property and live in the West Bank say in the lawsuit that they have rented via Airbnb and want to continue to do so. The other seven plaintiffs are a mix of American and dual Israeli-American citizens who want to rent in the West Bank via Airbnb in the future. Some have rented in the past. Two of that group live in Maryland and two in New York.

The lawsuit identifies the Boycott, Divestment, and Sanctions (BDS) movement, which says it exists to pressure Israel on human-rights issues and to withdraw from occupied territories, as a force behind Airbnb’s change in policy along with what the filing claims are “other anti-Israel and anti-Semitic organizations and activists.”