How the Last Air-Cooled Porsche 911 Came to Be 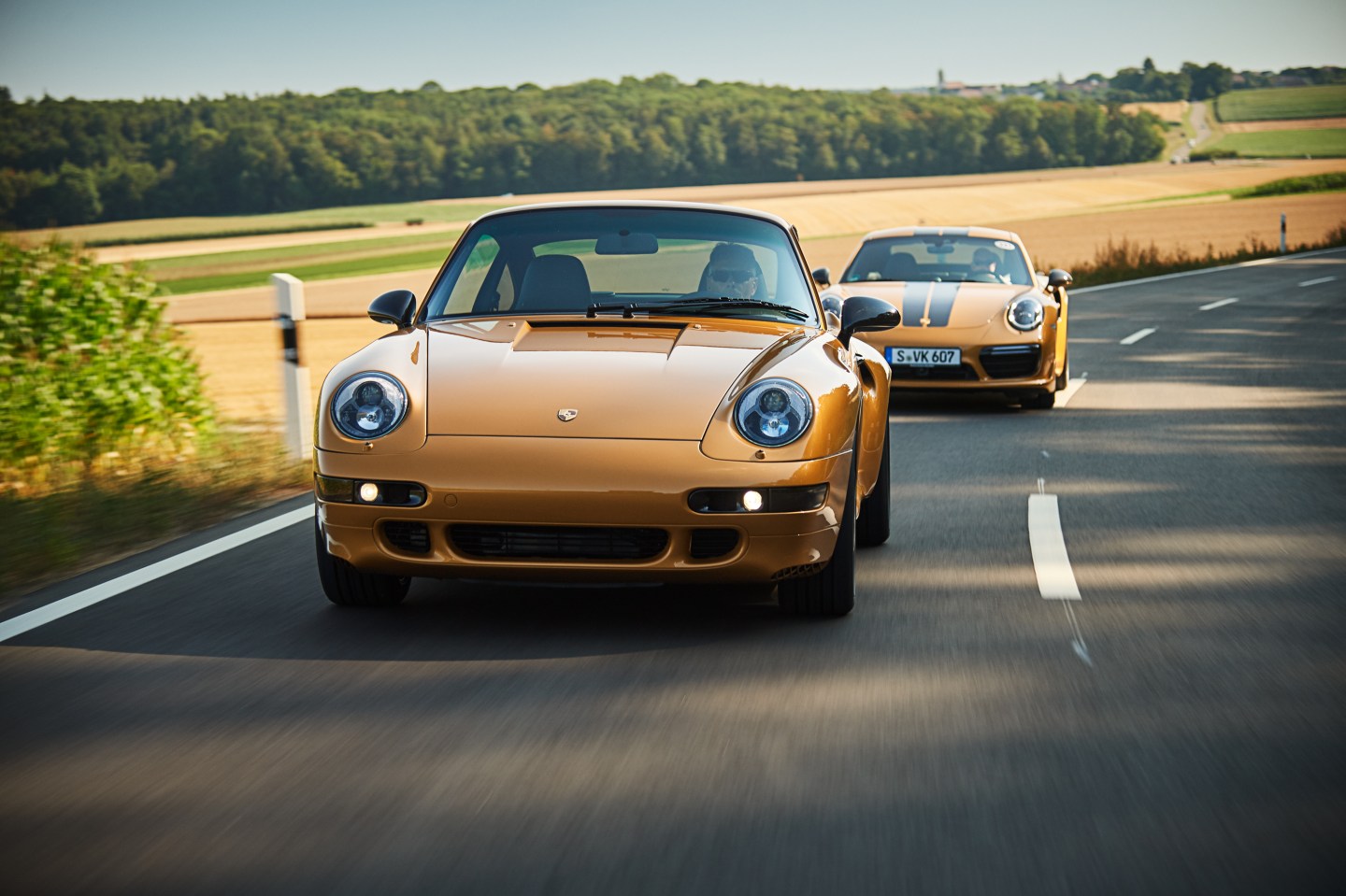 Eighteen months ago, Porsche’s restoration specialists dusted off the shell of an old Porsche 911 sports car languishing in a corner of a warehouse and asked themselves, “What if?” This weekend, Project Gold made its public debut as a modern reincarnation of the last turbocharged 911 of the air-cooled era.

Porsche, which turns 70 this year, displayed the car at Rennsport Reunion in Monterey, Calif., the sixth semi-annual iteration of the world’s largest gathering of Porsche enthusiasts. The golden yellow 911 was originally built in 1998 as the last model of the 993 series.

Project Gold is the first time Porsche Classic, the automaker’s in-house restoration business, reconstructed a car from scratch. “It was the last body in the warehouse, sitting there for 20 years waiting for some guys to have a crazy idea,” said Alexander Fabig, head of Porsche Classic.

The car features a new 450-horsepower, 3.6-liter twin-turbo flat-six engine and an updated gearbox, interior and wheels. “We did not use anything that wouldn’t be used in 1998,” said Boris Apenbrink, director of special vehicles.

RM Sotheby’s will auction the one-off car for the Ferry Porsche Foundation on Oct. 27 at the Porsche Experience Center in Atlanta as part of its “Porsche 70th Anniversary Sale” of close to 70 collectible Porsche models.

Project Gold carries no price tag, but it will be issued a new Vehicle Identification Number as a 2018 production car. However, it cannot be registered with the Department of Motor Vehicles because it doesn’t meet current safety regulations and is not street legal.

The car is expected to fetch a premium as the last model of Porsche’s air-cooled era. During its first 50 years, Porsche built a loyal following for its engines that released heat directly into the air. After 1998, the automaker switched to water-cooled engines that use liquid coolant. “For the community, this was at first very difficult to accept, and it’s still a big milestone,” said Fabig.

Specialists said sourcing or reconstructing more than 6,500 parts for Project Gold proved challenging, from its handcrafted air intakes to its hand-painted, gold-accented black wheels. Its wiring harness – miles of cable that connect the car’s components – needed to be built from scratch, a complex and uncertain process. “You only know in the end if you push a button and it works,” Fabig said.

Though the meticulous process and attention to detail calls to mind a certain other restoration house for classic Porsches, Porsche said Project Gold is not meant to compete with Singer Vehicle Design, the Los Angeles company that charges up to seven figures to outfit certain 911 models with new powertrains and refurbished bodywork and interiors.

“This is not the entry point for a new business unit,” Apenbrink said. “That would probably take away from the magic of it.”