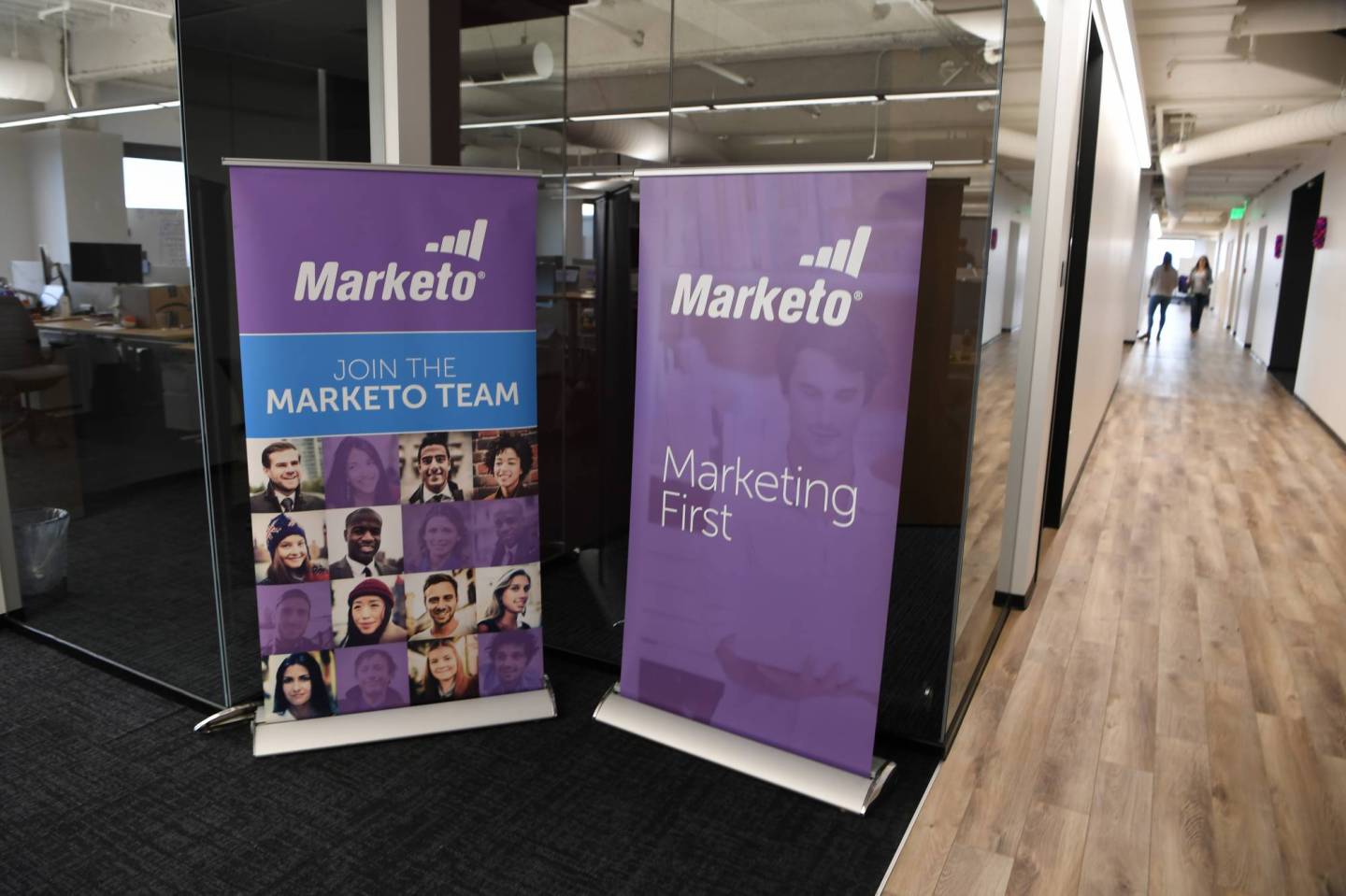 DENVER, CO - DECEMBER 28: Marketo CEO Steve Lucas and Kathy Leeman, chief of staff/head of biz dev with their staff on December 28, 2017 at their office downtown Denver. The marketing tech company Marketo is based in San Mateo, Calif. But a peek into its future makes the company sure seem like it's here in Denver. New CEO, hired after Vista Equity Partners acquired it last year, is not only from Denver, he's based here. (Photo by John Leyba/The Denver Post via Getty Images)
John Leyba—Denver Post via Getty Images

There was a curious omission from Adobe’s news release Thursday announcing it is paying $4.75 billion for marketing software firm Marketo. Adobe failed to mention who owns Marketo now.

Adobe’s reticence notwithstanding, the seller is no secret. It is Vista Equity Partners, which took Marketo private in 2016 for about $1.8 billion. Adobe likely didn’t want to draw attention to the fact that it didn’t buy Marketo for far less a mere two years ago.

Back then Marketo’s business was flagging because its one-time partner, Salesforce.com, had purchased a Marketo competitor called Exact Target. Jefferies analyst Brent Thill thinks Adobe is a two-time loser in the buyout game. He thinks Exact Target was the better asset as was Adobe acquisition Magento compared with a similar company Salesforce bought, Demandware. “They are late to the dance with these two deals,” Thill says.

The biggest winner here is Vista, which prides itself for being able to spruce up middling software companies by applying its long list of best practices to them. A $2 billion return in two years is about as good as it gets.

Better to be lucky than good. It wasn't publicized in advance, so it was just a coincidence that yesterday's Data Sheet essay was about smart speakers, but Amazon held a press event on Thursday to unveil a bevy of new Alexa-powered hardware products. As rumored, the new line up included a $60 microwave oven, as well as updated models of the basic $50 Echo Dot and $150 Echo Plus speaker, a $25 smart plug, a $30 wall clock, a $50 car speaker, and more. GeekWire has the full and complete list. As the Alexa ecosystem grows, more companies are coming on board, too. Microsoft is working on a Skype app for Alexa and Facebook is developing an Alexa-powered video chat device to be called Portal.

A closed mouth gathers no feet. Outside developers can scan and share data from Gmail accounts when users have given permission, Google said in a letter to Congress on Thursday. "Developers may share data with third parties so long as they are transparent with the users about how they are using the data,” Susan Molinari, vice president for public policy and government affairs for the Americas, wrote. Google said it carefully reviews the developers' privacy policies. In other not-so-great Gmail news, foreign hackers have been targeting the personal accounts of several senators and their aides, probably as part of an effort to meddle in U.S. elections, Google confirmed.

Do not mistake temptation for opportunity. Consolidation may be hitting the food delivery market. Uber, which runs Uber Eats, is in talks to buy European competitor Deliveroo for several billion dollars, Bloomberg reports. Deliveroo, started in 2013, was valued at $2 billion last year when it raised $385 million of venture capital.

We don’t know the future, but here’s a cookie. Growth in the U.S. streaming music market appears to be slowing. Total music industry revenue rose 10% from last year to $4.6 billion in the first half of 2018, including a 28% increase in streaming sales to $3.4 billion. Last year, total revenue rose 17% and streaming revenue increased 48% for the comparable six month period. CD sales plunged 42% to $246 million, while vinyl records brought in $199 million, up 13%. Perhaps more importantly for the future of the recording business, Spotify started allowing independent artists to upload their music directly to its servers without any upfront fee.

It is a good day to have a good day. Shares of online-ticketing company Eventbrite rose 59% to close at $36.50 in their first day of trading on Thursday. Eventbrite, which listed on the New York Stock Exchange under the ticker EB, initially priced its shares at $23, above the projected range of 19 to $21, raising $230 million. On Friday morning, online fashion seller Farfetch priced its IPO at $20 per share, also above its projected range, to raise $884 million for the company. It will begin trading later on Fridat under the symbol FTCH.

Your road to glory will be rocky. It was probably inevitable, but the first reported fatality of a rental scooter rider occurred earlier this month in Dallas. Jacoby Stoneking was not wearing a helmet when he crashed on the Lime scooter he had ridden home from a restaurant. Meanwhile, in Europe, ride hailing service Taxify expanded into the rental scooter game, launching its Bolt brand in Paris on Thursday.

Decision time. Police in Minneapolis have concluded their investigation of a rape allegation against JD.com CEO Richard Liu, putting the matter in the hands of prosecutors, who now must decide whether to bring charges. Police delivered evidence without making a recommendation about charges and the prosecutors have no deadline to decide, the Wall Street Journal reports.

The Deliberate Awfulness of Social Media (New Yorker)
To be alive and online in our time is to feel at once incensed and stultified by the onrush of information, helpless against the rising tide of bad news and worse opinions.

Twilight of the Terminal: The Disruption of Bloomberg L.P. (CB Insights blog)
The Bloomberg Terminal's success in the 1980s birthed an empire. Today, that empire is under siege from competitors, government regulations, and the changing nature of finance itself.

'For Me, This Is Paradise': Life in the Spanish City That Banned Cars (The Guardian)
In Pontevedra, the usual soundtrack of a Spanish city has been replaced by the tweeting of birds and the chatter of humans

For Valentino Dixon, a Wrong Righted (Golf Digest)
After 27 years in prison, a man who loves golf walked free today. Not only that, he was given back his innocence. Of course, the state can regift innocence about as capably as it can 27 years.

It's the mystery that has plagued a certain class of online newshound: Why did Google kill its popular Google Reader app? Well, Jason Shellen led the Reader project for years and though it was axed after he left the Googleplex, he tells tech investor Hunter Walker all about the downfall in an interview on Walker's blog. Walker's last question was "Seriously though, who killed Google Reader?" Shellen's answer:

I wasn’t consulted! I left Google and then five years later they retired it. I heard it might have been a Google Plus executive but he’s not there anymore. From what I understand, by the time Reader was killed, the usage numbers were not on an upward trajectory. Pair that with blogging on the decline in the face of Facebook and Twitter and you have a murky situation. It was also at a time when Google Plus had been given a lot of resources and then hadn’t lived up to internal expectations, so maybe it just drew the shortest straw.

Reader never had an easy time. It was nearly killed before launch in the annual product priorities process. I think it was on a list of “Top 100 projects that should probably not launch” in the summer of 2005. In October 2005, after the beta launch, my manager told me that I should probably disband the team and stop hurting the careers of the engineers involved and find a new project to join. I did not disband the team, and things improved quickly with rapid product iterations (and lots of users).

I’m still proud of the team behind Reader and have fond memories of that time in building a new product at Google. It would be amazing to see what Reader would have become if it made it through the chasm like Google Photos was allowed to do.

Next Year, Half of All Calls to Cell Phones Will Be Scams—And There's Nothing We Can Do By Grace Dobush

Is the new canon the same as the old canon, great English language literature-wise? New York Magazine's Vulture blog asked a bunch of reviewers and authors to pick the best books written in the 21st Century so far. It's a fascinating list. A couple of my favorites, Michael Chabon's The Amazing Adventures of Kavalier & Clay and Haruki Murakami's 1Q84, but there were many titles of interest I'd missed. Check it out and add to the pile on your nightstand.