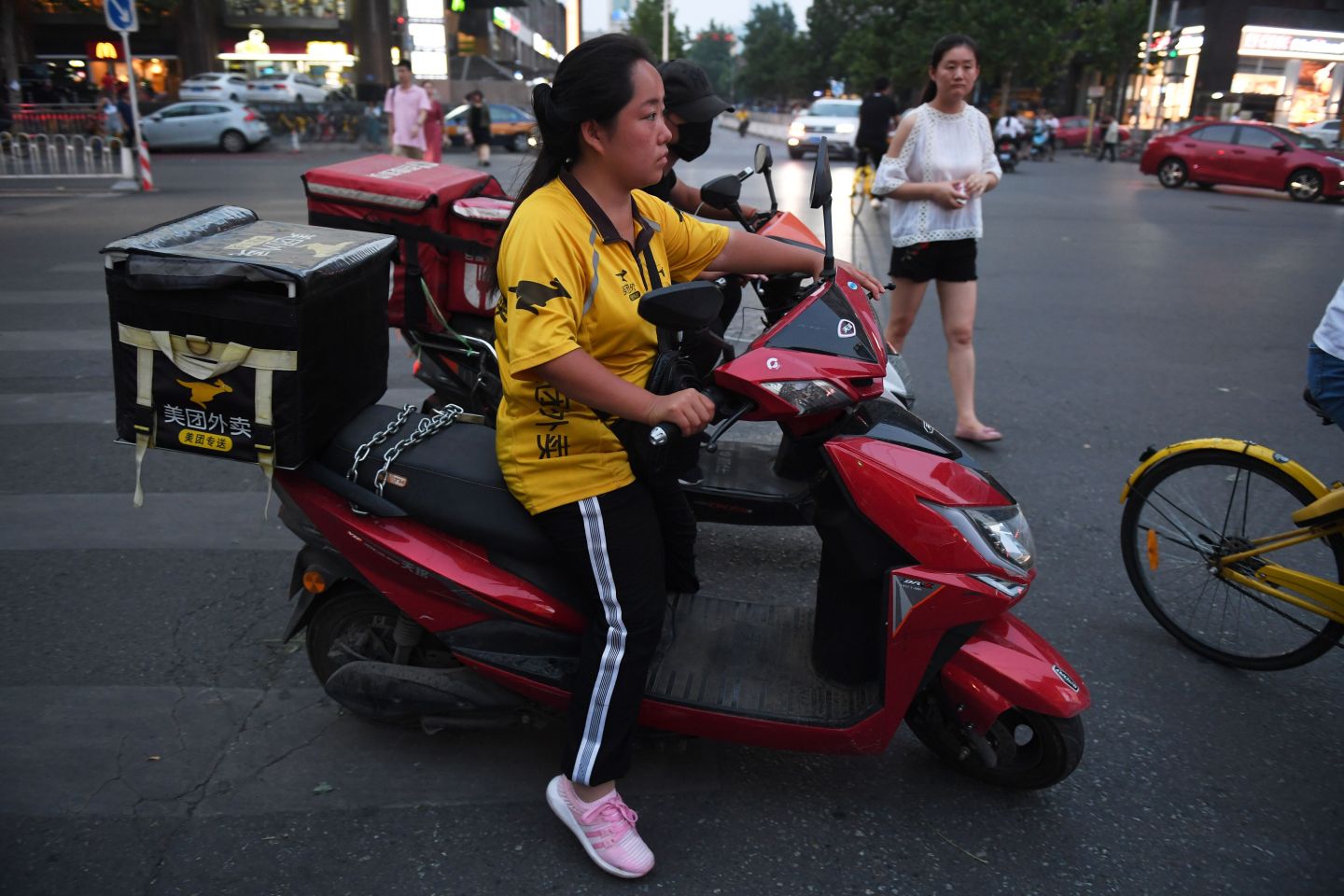 A Meituan delivery rider waits at an intersection as she delivers food in Beijing on June 26, 2018. - Chinese online services giant Meituan-Dianping filed for an initial public offering in Hong Kong on June 25, in what could become one of the the biggest IPOs of the year. (Photo by GREG BAKER / AFP) (Photo credit should read GREG BAKER/AFP/Getty Images)
Greg Baker—AFP/Getty Images

Consumers in China use Meituan-Dianping to order all manner of delectables: shrimp dumplings, spicy chicken feet, hairy crab. A few taps on the app and, presto, one of Meituan’s more than 500,000 drivers is at your door. The service also is handy for booking a haircut, hotel, or movie ticket, and checking restaurant reviews. More than ten million people use Meituan each day, making it China’s largest on-demand online services provider.

There is one thing Meituan does not deliver (at least not yet): profits. The Beijing-based venture has lost money in each of the last three years; in 2017 it burned through nearly $3 billion. And yet, when Meituan lists in Hong Kong next week, it is expected to seek a share price implying a valuation of more than $45 billion.

Until only a few months ago, there was nothing odd about this. Global investors were happy to fork over billions for money-losing Chinese tech startups with convoluted ownership structures and murky disclosure practices. After all, wasn’t China’s burgeoning middle class one of the most profound developments of the 21st century? Shouldn’t investing companies like Meituan be considered an opportunity comparable to the chance to buy Amazon back in 1997?

Lately answers to such questions don’t seem so obvious. China tech stars have had a miserable summer—even as their American counterparts soar to record highs. Shares of China’s two tech giants, Alibaba Group and Tencent Holdings, have tumbled 20% from peaks in June—the former hurt by concerns about declining profits and the latter dragged down by a government crackdown on the sale of online games. JD.com’s shares, already weighed down by investor concerns about weak earnings, have plunged to a 19-month low following founder Richard Liu’s arrest in Minnesota this week on rape charges.

Xiaomi, whose June debut on the Hong Kong exchange is the year’s biggest China tech listing so far, has slumped back to its IPO price. Pinduoduo, China’s third-largest e-commerce platform, has languished since listing on the NASDAQ in July—and won’t benefit from recent reports that its site is a favorite of animal traffickers selling endangered pangolins. Meanwhile, China’s ride-hailing powerhouse, Didi Chuxing, faces regulatory scrutiny and public outrage after a driver from one of its car-pool services raped and murdered a female passenger.

It’s tempting to dismiss all these mishaps as unrelated—a series of unfortunate events. But it feels to me like there’s something bigger going on. Over the past three months, China’s tech sector has become a much less forgiving place. The economy is slowing, consumers are hunkering down. The U.S.-China trade war has created a climate of uncertainty and Beijing is squeezing China’s tech sector more tightly than ever. As the industry matures, the advantage is shifting from companies with visionary founders who spin fancy yarns about growth and limitless opportunities to those run by solid execution-oriented managers operating in transparent governance structures.