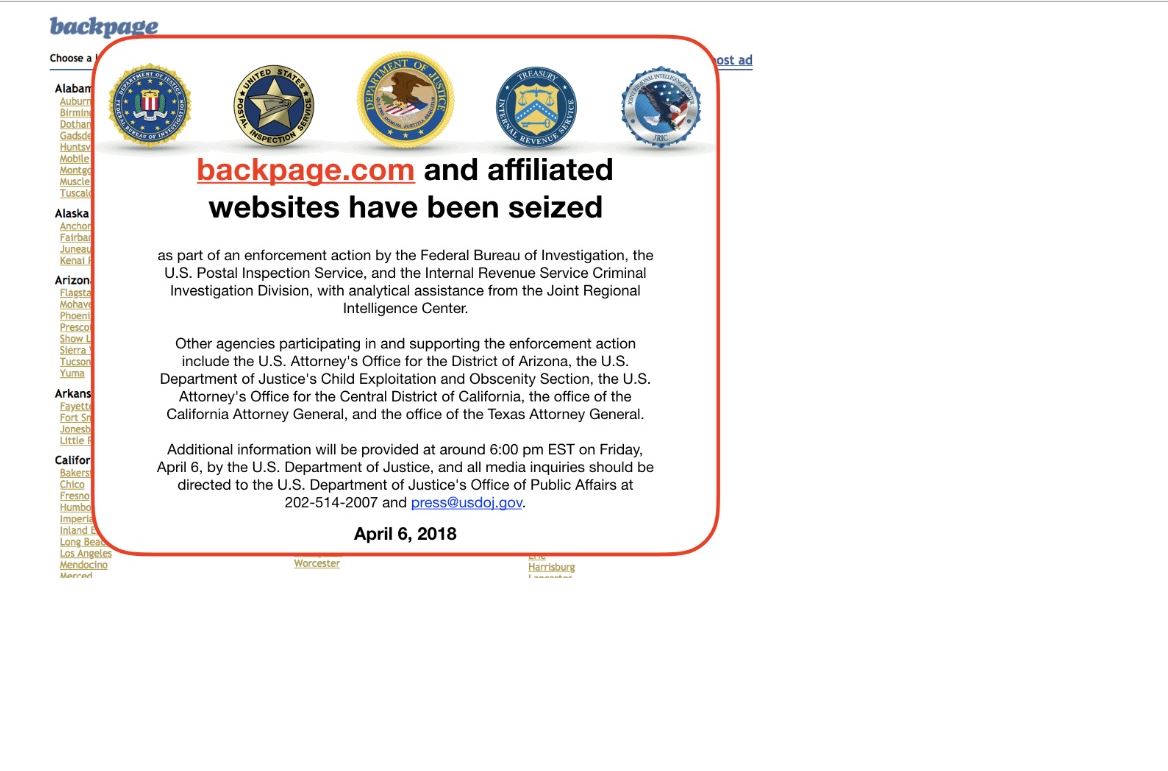 This screen grab image obtained April 9, 2018 shows backpage.com and affiliated websites that have been seized by the FBI in Washington,DC. Two co-founders of Backpage and five executives of the classified advertising website have been indicted on charges of enabling prostitution and money laundering.Backpage was abruptly shut down by the US authorities on April 6, 2018 and the indictments, by a federal grand jury in the southwestern state of Arizona, were unsealed on April 9, 2018. "For far too long, Backpage.com existed as the dominant marketplace for illicit commercial sex, a place where sex traffickers frequently advertised children and adults alike," Attorney General Jeff Sessions said in a statement."But this illegality stops right now," Sessions said. "It can no longer be used by criminals to promote and facilitate human trafficking." Among those indicted were Michael Lacey, 69, and James Larkin, 68, who launched the site in 2004 along with another individual identified only by the initials "C.F."
- AFP/Getty Images

The plea deal, reported by the Associated Press, means federal prosecutors will drop the 50 charges of facilitating prostitution and 17 money laundering against Hyer, who now faces up to five years in prison and a maximum fine of $250,000. Hyer is scheduled for sentencing on Nov. 19.

Hyer said that the ad conspiracy involved copying Craigslist’s adult section ads, posting the copied ad on Backpage, and then offering the lister a free ad, AP reported. He added that some of the ads were also illegal because they linked to outside websites showing ratings for the sex workers.

Backpage was a classifieds site that included ads for sex work. The website was issued multiple warnings regarding its sex work ads.