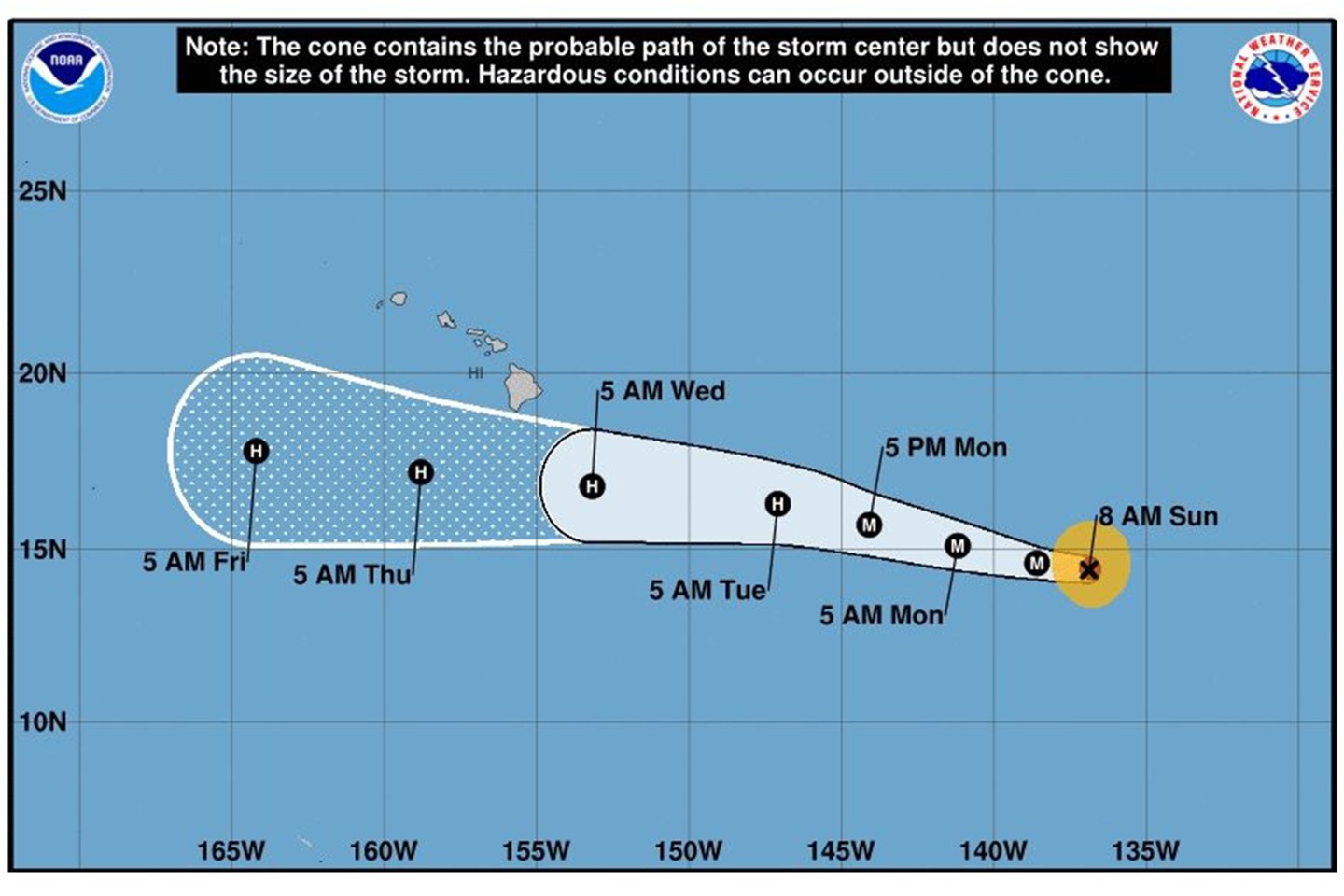 HANDOUT EDITORIAL USE ONLY/NO SALES Mandatory Credit: Photo by NOAA HANDOUT/EPA-EFE/REX/Shutterstock (9780508a) A handout image made available by the National Oceanic and Atmospheric Administration shows the current path of Hurricane Hector as it moves west toward Hawaii, USA, (issued 05 August 2018). The latest forecast of Hurricane Hector, currently a category 3 hurricane, shows it will pass south of the big island of Hawaii on 08 August. Residents of the Islands were placed on alert as Hector has sustained winds of 125 mph. Hurricane Hector moves toward Hawaii, Pacific Ocean, --- - 05 Aug 2018
NOAA HANDOUT/EPA-EFE/REX/Shutterstock

As lava continues to spew from the Kilauea volcano, Hawaiians and Hawaiian tourism officials have another potential problem on the way: A major hurricane.

Hurricane Hector, which is a Category 4 storm with sustained winds of 140 mph, is headed toward Hawaii and could hit the southern part of the island, where Kilauea is located, by the middle of the week.

It’s too early, at this point, for forecasters to say with any certainty whether the storm would brush the island or hit it directly. The current track predicts the eye of the storm will travel south of the island, but it’s close enough that officials are keeping a close watch on the situation.

So what happens if a volcano and a major hurricane do battle? Scientists admit they’re not sure, but say it’s unlikely either would cancel out the other. A volcano’s intense heat, though, could intensify the storm. And one study says dust from an eruption could result in more lightning.

Those effects, though, would likely be localized.

“As massive as the impact of a volcanic eruption can be, it’s hard to grasp the scale of a hurricane,” David Nolan, an atmospheric scientist at the University of Miami, told The Atlantic. “The eye wall of a hurricane typically has a radius of 30 miles. Off the top of my head, I’d say the primary updraft from a volcano is just one mile across.”

The bigger fear is mudslides. As rains soak the ash left by an eruption, the mud could break free (an event called a lahar) and race down the volcano mountainside at speeds of up to 120 mph.

That last happened in 1991, in the Philippines, when Typhoon Yunya hit Mt. Pinatubo.