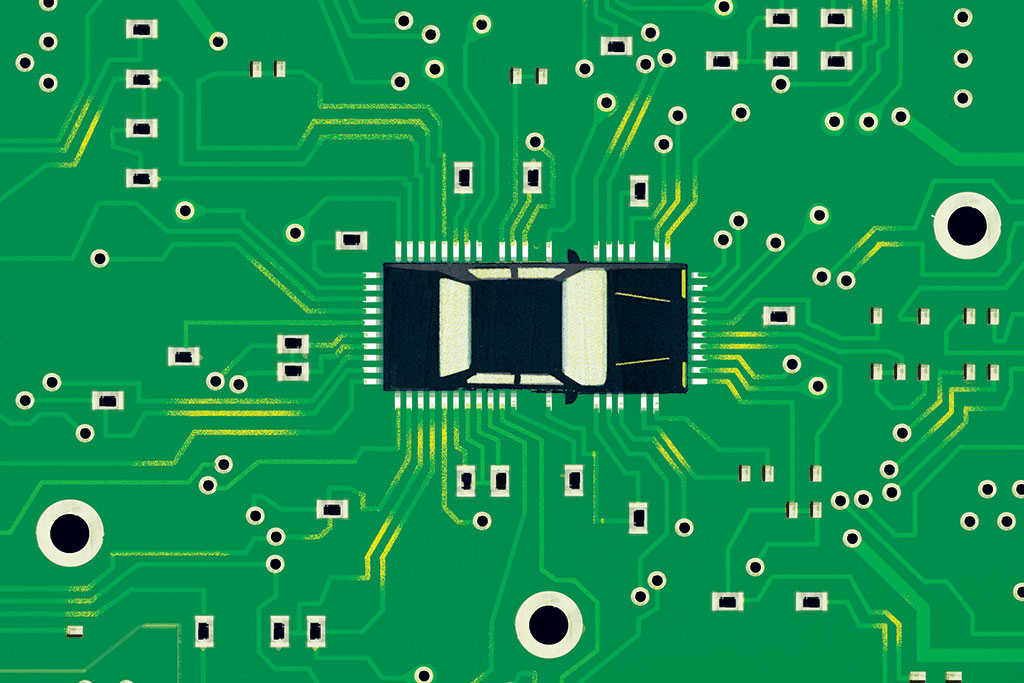 IN THE MIDDLE OF ARITY’S Chicago offices, wedged between a row of programmer workstations and a bank of conference rooms, there sits a 2012 Ford Fiesta. Arity, a subsidiary of insurance giant Allstate, hauled the mini-sedan up to Allstate’s eighth-floor Innovation Hub in the Merchandise Mart last year as a tool for its work in telematics—harnessing and analyzing the data generated by the computers inside millions of modern motor vehicles. Its engineers seldom use the Fiesta anymore, admits Arity president Gary Hallgren, but with the office’s staff having doubled in a year, there’s no longer room to maneuver it back to the freight elevator. “I guess we’ll have to take it apart to get it out of here,” he muses.

The stranded Fiesta may be a symbol of Arity’s growth, a high-mileage humble-brag. But it’s also a metaphor for a tech-centric vision of what car insurance could become— where the data you generate as a driver is all-important, and the car you’re driving is an afterthought.

Arity and Allstate believe that over the next decade, ubiquitous ride-hailing and car-sharing will make car ownership significantly less common. That trend could upend the insurance industry, where premiums are closely tied to vehicle ownership. In anticipation, Arity is gathering and analyzing personal driving data that could someday underpin flexibly priced policies that cover you no matter who owns the car you’re in. Such products could help Allstate stay competitive despite a likely decline across the industry in revenue from traditional policies. “We’re working on how we would be that insurance provider for you, at that moment,” says Allstate CEO Tom Wilson.

Insurers have long deployed telematics to power “usage-based insurance” (UBI), offering discounts to drivers who agree to be monitored via dashboard devices and apps. If you drive infrequently and avoid dangerous habits like speeding and hard braking, programs like Progressive’s Snapshot, State Farm’s Drive Safe & Save, and Allstate’s Drivewise can knock 5% to 15% off your premium. But Arity, which launched in 2016 and now has more than 350 employees, represents the most aggressive bet on telematics so far by a major insurer—an effort to expand the technology in both scope and sophistication.

It isn’t a lucrative bet yet: Arity lost $15 million in 2017, on $79 million in revenue. But the exponential rise in the quantity and quality of telematics data could turn that around. “Cars and phones alike have far more sensors that collect more information with greater accuracy,” says Hallgren. “And wireless networks transmit it in real time.” The upshot: Arity has access to more than 1 billion miles of new driver information each month, along with 10 years of historical data from Drivewise, which the telematics startup now oversees.

Arity is using the data to learn, in ever finer detail, which behaviors correlate with accident risk. The resulting algorithms are building blocks for “driver scores,” analogous to credit scores, which follow drivers from vehicle to vehicle—and could help insurers price new coverage products based on individual behavior rather than on traditional factors like zip code, marital status, or vehicle model. Arity is already pitching scoring services to corporate clients: Its potential customers include trucking fleets and car-sharing companies. (For its part, Allstate recently announced a partnership with Uber, for whom it provides commercial driver insurance in four states.) Other potential partners include insurers that don’t have data at the same scale: In October, North Carolina’s National General hired Arity to help with data collection and driver scoring.

Wooing consumers may prove more challenging. Only about 10% of U.S. drivers use UBI plans, according to J.D. Power; privacy concerns keep many away. But Arity is building “add-ons” that could entice reluctant shoppers. Drive Shield, for example, alerts motorists about stretches of road with high accident frequency and provides alternative routes to steer them clear. Another feature recognizes when drivers futz with their smartphones while in motion and sends them distracted-driving alerts—after they’ve parked—to encourage better behavior. (And yes, the accelerometers in your phone are that sensitive: “We can tell which hand it’s in,” Wilson says.)

Intrusive? Potentially. But consumers might accept a tradeoff in which nudges toward safer behavior can earn them lower premiums. And those might not be the only savings. Hallgren and Wilson estimate that a 20% increase in transportation efficiency—brought about largely by more car-sharing—could save the average household about $3,000 a year. That trend would siphon revenue away from insurers. But if it turns driver scores into a must-have, Arity and Allstate could come out ahead.

CORRECTION: An earlier version of this article stated incorrectly that Arity provided commercial-driver insurance to Uber in four states; that insurance is provided by Allstate.

A version of this article appears in the August 1, 2018 issue of Fortune with the headline “Kick-Start My Chart.”