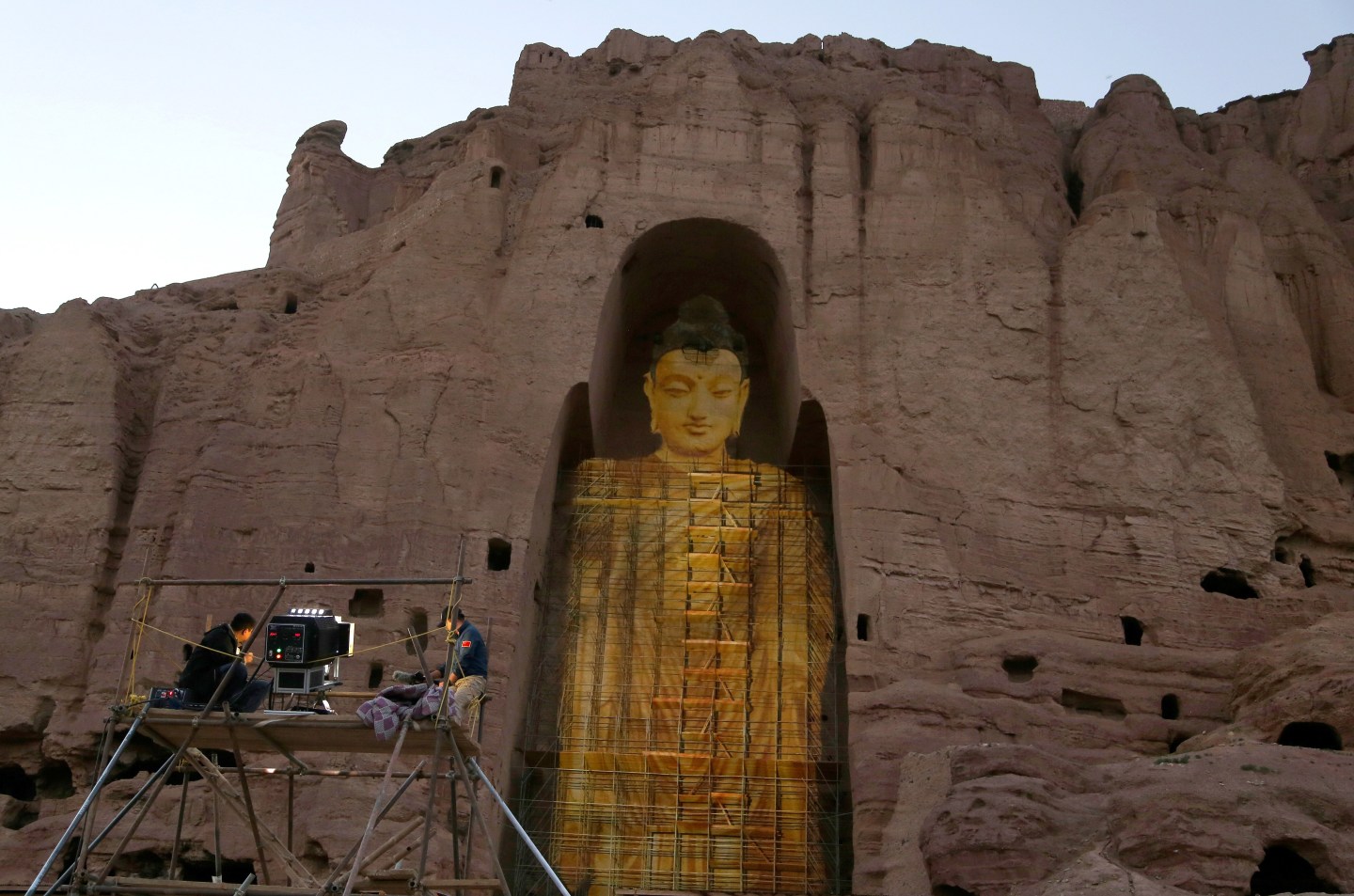 This photo taken on June 7, 2015 shows the projected image of a Buddha statue in Bamiyan that had been destroyed by the Taliban in 2001. The initiative to visually restore the destroyed antiquities was dreamt up by Chinese couple Zhang Xinyu and Liang Hong, who are travelling through countries on the historic Silk Road route. AFP PHOTO / Kamran Shafayee (Photo credit should read KAMRAN SHAFAYEE/AFP/Getty Images)
AFP AFP/Getty Images

In March 2001, months before the horrific events of 9/11 put the Taliban on most Americans’ radar, I watched with horror as a group of Afghan extremists rode through the jagged Hindu Kush along the ancient Silk Road. They stopped in the Bamiyan Valley, a lush basin ringed with sandstone cliffs, and began to climb a pair of stunning 100-foot high Buddhas that were carved into the sides of the valley walls 1,500 years ago.

The men were carrying loads of dynamite. Slowly, with choreographed precision, the men placed their explosives in inlets throughout the Buddha sculptures and hit their detonators. Boom. The Buddhas of Bamiyan were destroyed forever.

Or so everyone thought.

With the exponential advances of 3D digitization, projection, and printing, in 2015, the Buddhas of Bamiyan rose again. Thanks to new 3D projection technology that cast holograms of the original Buddhas from projectors mounted on scaffolding, a crowd of locals, playing music and staring in awe at what was just moments earlier a gaping hole in the mountain, watched as the two towering idols, lit from within, rose again for one evening. For me, this was a memorable moment, showing just how far 3D technology had come.

The light show was reportedly a gift from a Chinese couple to the Afghan people, and it called upon the same technology that brings us holograms of political leaders offering speeches, or Michael Jackson doing the moonwalk long after his death.

The reincarnation of the Buddhas marked a turning point for a new kind of historical activism. Thanks to the power of 3D printing, the technological prowess of innovative startups, and the industry-wide power of giants like Google (GOOG), we have a new tool in the fight against cultural terrorists: a way to bring back the glorious historical monuments that some would like us to forget.

The Taliban televised their demolition of the Buddhas, and Ben Kacyra was horrified. Kacyra, a native of Mosul, Iraq, had seen his fair share of senseless destruction. He was so devastated by the loss of the Buddhas that in 2003 he founded CyArk, a humanitarian and cultural nonprofit that creates digital records of the world’s cultural heritage sites. Among the sites now committed to their digital memory: the Ananda Ok Kyaung temple in Bagan, Myanmar, which was badly damaged by a 2016 earthquake (they mapped it before the earthquake, saving its pre-damage shape); the Al Azem Palace in Damascus, Syria; and the ruins of the Mayan city of Chichen Itza in Mexico.

CyArk’s work has been so significant that in April, Google partnered with the company to launch the Open Heritage project, which allows people to experience the world’s great wonders—both existing and ruined through a careful marriage of CyArk’s 3D data and a Google-powered mobile or virtual reality headset.

But we can go even further.

The rubble of the Buddhas has now been scanned and printed at 1:25 scale. These small model statues are being used to plan the life-size restoration of the statues through 3D printing. It is an ambitious tech project, and we may be years, if not decades, away from achieving the ultimate goal of recreating these statues.

There are other organizations doing similar, inspiring work. University of Oxford, Harvard University, and Dubai’s Museum of the Future have worked together with the Institute for Digital Archaeology (IDA), which distributes 3D cameras to residents in areas attacked by ISIS so that ancient buildings and artifacts could be documented before they are lost to war forever. The Million Image Database project aims to document historic and archaeological locations all around the world, using 3D photography to capture dimensions and specifications. The data is archived so that artifacts and structures can be recreated through 3D printing in case of damage. The organization aims to collect one million 3D images of these endangered historic sites, and has already captured more than half a million images, thanks to the 5,000 3D cameras that have been distributed.

In a project conducted by the Victoria & Albert Museum in London, historians recreated a chair owned by Marie Antoinette using molds, 3D scanning, and 3D printing. By scanning the missing parts, they were then able to reverse 3D print them. The moldings taken from the 3D printed pieces were re-casted in a non-chemical material that was then toned and gilded so that it would match the original pieces. Many of such items were stolen or destroyed following the French Revolution.

With technology and innovation, powered by the rise of 3D scanning and printing, all things are possible. Quite soon, in fact, 3D printing will allow us to take these stunning digital imprints and do more than view them through the filter of a hologram or virtual reality headset. Smaller versions, printed to scale on the home 3D printers that will soon exist in households across America, will offer endless opportunities for education and cultural enrichment.

But the potential is much grander, as well. In the very near future, harnessing these digital libraries and the immense bandwidth offered by a giant like Google, we will also be able to fully recreate cherished heritage sites, using not just light and shadow, but actual brick, mortar, and 3D-printed concrete.

The Buddhas of Bamiyan will rise again in that lush valley, not just as a beautiful light show for one night only, but as living, tangible proof of the resilience of human creativity in the face of senseless destruction. Just imagine if we do the same for the Temple of Bel in Palmyra; the libraries at the University of Mosul; and the Armenian Genocide Memorial in Syria.

It’s no longer a far-off dream. The technology is ready. With the wonders of 3D, we’ve found a new way to fight for the preservation of our cultural and spiritual monuments, powered by brainpower and the collective will of humanity.

Avi Reichental is founder and CEO of XponentialWorks.

Correction: An earlier version of this article misstated the creation of the Institute for Digital Archaeology (IDA). It has worked together with the University of Oxford, Harvard University, and Dubai’s Museum of the Future. It was not created by them.