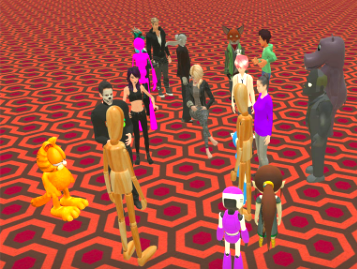 He’s not the only who thinks this. The company announced on Thursday that it raised a $35 million Series D round led by Galaxy Digital, a fund run by Wall Street baron turned crypto believer Mike Novogratz.

Rosedale told Fortune that High Fidelity is building blockchain infrastructure to support a billion VR users, and has already created a native cryptocurrency and digital-asset registry.

Some might consider this optimistic given that the words “blockchain” and “virtual reality” are enough on their own to make people’s head swim—combining the two technologies might be especially mind-boggling.

But if someone is cut out to do this, it could well be Rosedale, who is famous for creating the first mainstream virtual world, known as Second Life. The game, which still has a million users today, gave birth to a digital currency known as Linden dollars, which achieved a significant market cap in the real world.

Today, Rosedale says most people prefer to enter virtual worlds with headsets rather than a monitor and a mouse, but that the need for a currency is just as pressing.

“If bitcoin had been around in 2005, I would have been delighted to use it for Second Life,” he says.

As for High Fidelity, he says users will be able to access digital tokens with a virtual tablet-like device within the world, and register these tokens and other possessions on a blockchain. He also envision a growing role for real world merchants in this scenario—for instance, a person wanting to look cool could buy a pair of Rayban sunglasses, and then have Rayban record the purchase to a blockchain to prove they owned them..

Rosedale added that High Fidelity will look to record transactions on EOS, a newer blockchain platform that has raised enormous sums of money, including from Galaxy Digital.