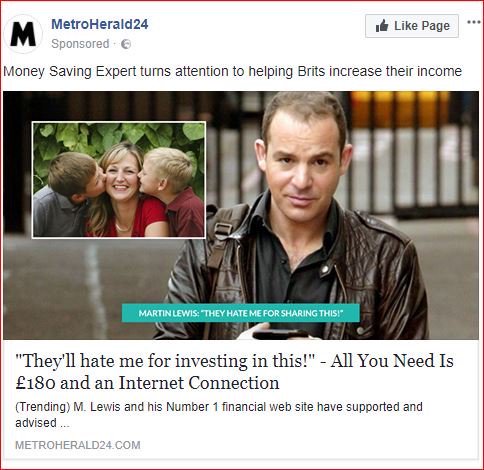 The British consumer finance expert and TV personality Martin Lewis has long had an issue with Facebook—the social network keeps running scammy ads that feature his face in order to create the impression of credibility.

Those who have seen fake ads on Facebook will be unsurprised to learn that many of these ads appear to be cryptocurrency-related scams. Now the MoneySavingExpert.com founder has lost patience, suing Facebook at the High Court in London for defamation.

“Enough is enough. I’ve been fighting for over a year to stop Facebook letting scammers use my name and face to rip off vulnerable people—yet it continues,” Lewis said in a statement. “I feel sick each time I hear of another victim being conned because of trust they wrongly thought they were placing in me. One lady had over £100,000 [$140,000] taken from her.”

Lewis, who has pledged to give any damages he might win to anti-scam charities, said he has told Facebook he never does advertisements.

“Any ad with my picture or name in is without my permission. I’ve asked it not to publish them, or at least to check their legitimacy with me before publishing. This shouldn’t be difficult—after all, it’s a leader in face and text recognition. Yet it simply continues to repeatedly publish these adverts and then relies on me to report them, once the damage has been done,” he said.

Until last week, Facebook had in fact not been using facial recognition in Europe for the last five years—at least, not on the faces of its users. This was due to crackdowns from privacy regulators who said the firm did not get proper consent from the owners of all the faces it was scanning. (The regulators are still skeptical that Facebook is getting the consent it must get under EU data protection law.)

According to Lewis, the most prevalent fake ads featuring his visage and name are “get-rich-quick schemes currently titled ‘Bitcoin code’ or “Cloud Trader,’ which are fronts for binary trading firms based outside the EU.”

Facebook had banned cryptocurrency-related ads since January, precisely because they tend to be scams. However, the ban has not always been very well enforced, as scammers find ways to cheat the system with, for example, slight misspellings of keywords.

“We do not allow adverts which are misleading or false on Facebook and have explained to Martin Lewis that he should report any adverts that infringe his rights, and they will be removed,” Facebook told Fortune, adding that it has removed multiple ads and accounts that violated its practices.

However, Lewis said in his statement that, even when the fake ads were reported, “many have been left up for days or weeks.”

“When they are taken down the scammers just launch a new, nearly identical campaign very soon afterwards and the whole rigmarole starts again,” he said. “On a personal note, as well as the huge amount of time, stress and effort it takes to continually combat these scams, this whole episode has been extremely depressing—to see my reputation besmirched by such a big company, out of an unending greed to keep raking in its ad cash.”

Dear @SkyNews and @guardian while I appreciate your coverage of my suing Facebook over defamation for fake ads.

Your own advertising algorithms have then published similar fake ads about me on the pages with those news stories.

Of course, Facebook isn’t the only advertising company out there that sometimes lets fake ads slip through its nets. As Lewis noted on Monday after his story was publicized, some publishers’ articles on the story came emblazoned with fake ads—online publishers tend to just put empty boxes on their sites that are filled by ad networks, with the publisher getting a cut.