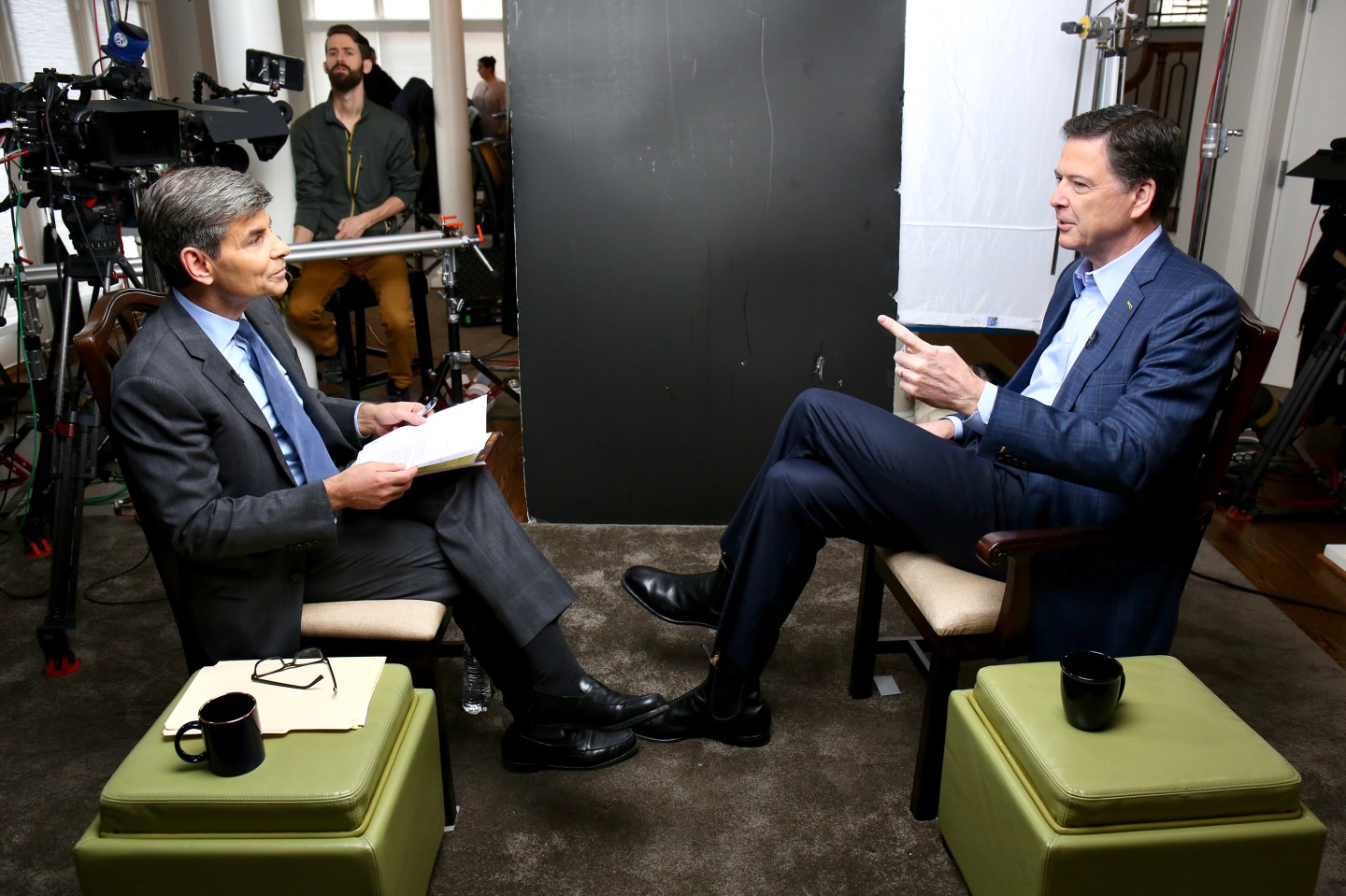 ABC NEWS - George Stephanopoulos sits down with former FBI director James Comey for an exclusive interview that will air during a primetime "20/20" special on Sunday, April 15, 2018.
Ralph Alswang—ABC via Getty Images

James Comey appeared on 20/20 two days before the release of his highly anticipated book, A Higher Loyalty: Truth, Lies and Leadership. In an hour-long interview with ABC News anchor George Stephanopoulos, the ousted former FBI director did not hold back on his criticism of President Donald Trump, who he described as “morally unfit” for the office.

“I think he’s morally unfit to be president. A person who sees moral equivalence in Charlottesville, who talks about and treats women like they’re pieces of meat, who lies constantly about matters big and small and insists the American people believe it, that person’s not fit to be president of the United States, on moral grounds,” he said.

Comey discussed a series of interactions he had with President Donald Trump revolving around the so-called Steele Dossier, a report authored by British spy Christopher Steele that includes unconfirmed allegations about an encounter Trump may have had with prostitutes while visiting Moscow in 2013. Steele was employed by an independent research firm, Fusion GPS, that received some funding from Hillary Clinton’s campaign and the Democratic National Committee.

In his interview with Stephanopoulos, Comey said he first informed Trump about the dossier early in January 2017, after a group of intelligence officials gave the then-President-elect intel about Russian interference in the presidential election — which Comey said was met mostly with questions about how to spin the information for the public and press. He called the dossier briefing with Trump “really weird.”

“It was almost an out-of-body experience for me,” Comey said. “I was floating above myself, looking down, saying, ‘You’re sitting here briefing the incoming President of the United States about prostitutes in Moscow.'”

In multiple later interactions, Comey said Trump asked him to prove the allegations included in the dossier were false, in part because “if there’s even a 1% chance my wife thinks that’s true, that’s terrible.”

“I remember thinking, ‘How could your wife think there’s a 1% chance you were with prostitutes peeing on each other in Moscow?'” Comey said. “I’m a flawed human being, but there’s literally zero chance my wife would think that’s true.”

When Stephanopoulos asked if Comey thought the allegations were true, however, he did not answer definitively.

“I honestly never thought these words would come out of my mouth, but I don’t know whether the current President of the United States was with prostitutes peeing on each other in Moscow in 2013,” Comey said. “It’s possible, but I don’t know.”

Comey also conceded his highly controversial decision to reopen the probe into Hillary Clinton’s private email server just weeks before the election partially stemmed from the fact that she was leading in the polls at the time. “I don’t remember spelling it out, but it had to have been, that she’s going to be elected president and if I hide this from the American people, she’ll be illegitimate the moment she’s elected, the moment this comes out,” he told Stephanopoulos.