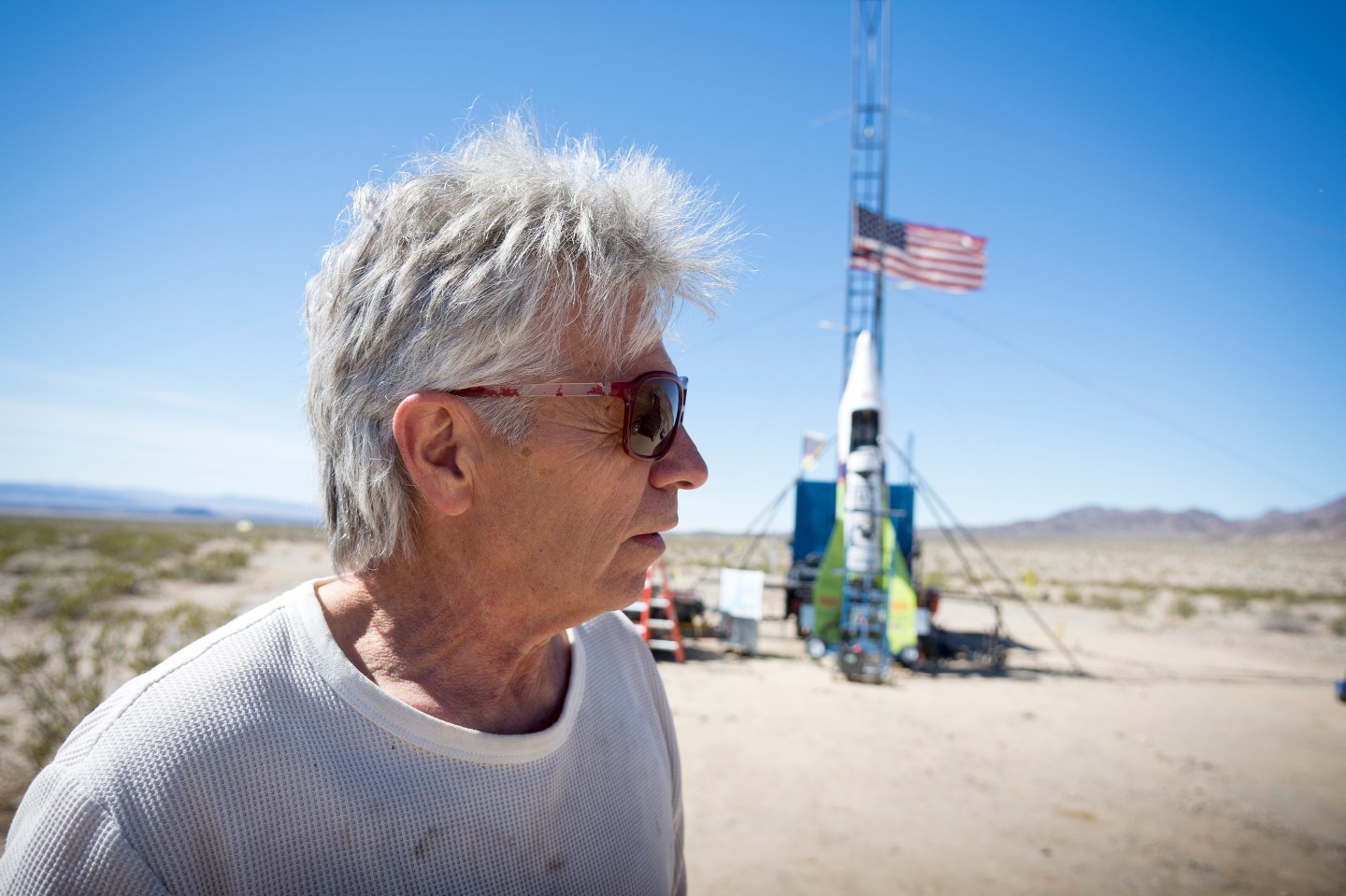 In this March 6, 2018, file photo, "Mad" Mike Hughes reacts after the decision to scrub another launch attempt of his rocket near Amboy, Calif. The self-taught rocket scientist who believes the Earth is flat propelled himself about 1,000 feet into the air before a hard-landing in the Mojave Desert that left him injured Saturday, March 24, 2018. Hughes tells The Associated Press that he injured his back but is otherwise fine after Saturday's launch near Amboy, Calif. (James Quigg/Daily Press via AP, File)
James Quigg—AP

The Earth is flat and Mike Hughes wants to prove it to you.

The amateur rocketeer, known as Mad Mike, took his first flight in the spacecraft he built on Saturday, soaring about 1,875 feet above the Mojave Desert.

The 61-year-old limo driver and self-taught rocket enthusiast delayed his flight several times due to technical difficulties and issues getting permission from the government to perform the launch on state or federal lands.

“I’m tired of people saying I chickened out and didn’t build a rocket,” he said after the flight. “I’m tired of that stuff. I manned up and did it.”

The entire endeavor was filmed for a documentary. You can see footage of the maiden voyage in the video below, which shows a fairly casual setting for a rocket launch.

Children stand unsettlingly close (at least for this reporter) to the rig Hughes built out of a modified mobile home and some scaffolding, and the rocket takes off without any sort of formal countdown.

The entire flight lasts just over one minute.

Waldo Stakes, who has been assisting Hughes, estimated that he traveled at about 350 mph before ejecting from the rocket and deploying a parachute. However. he continued to drop too quickly and had to use a second parachute to slow his fall before a rough landing.

Paramedics cleared him, though he expected some back pains.

“Am I glad I did it?” Hughes said. “Yeah. I guess. I’ll feel it in the morning. I won’t be able to get out of bed. At least I can go home and have dinner and see my cats tonight.”

This is the second time he’s built and flown in a rocket. In January 2014, he traveled more than 1,300 feet above Winkleman, Arizona before landing and collapsing. He took three days to recover.

Hughes spent about $20,000 over the course of several years to build the rocket he flew over the weekend. The documentary following his quest is planned to be released in August.

“Do I believe the Earth is shaped like a Frisbee? I believe it is,” he told the Associated Press. “Do I know for sure? No. That’s why I want to go up in space.”

For his next feat? He’d like to run for governor of California.