How Airlines Are Doubling Down on Comfort to Woo Business Travelers 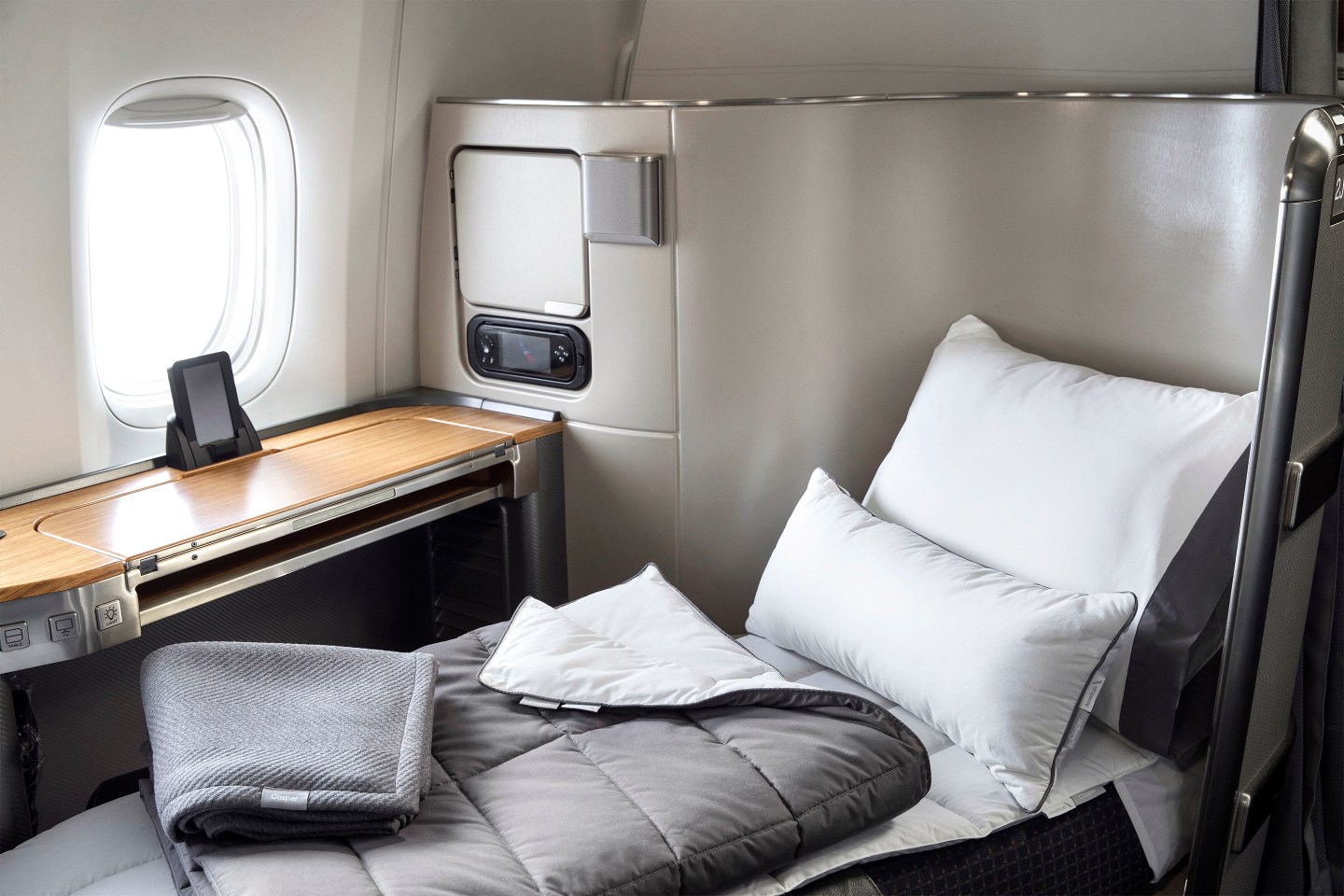 In 1944, Jean-Paul Sartre wrote that hell is other people, a maxim that perhaps most accurately describes the current state of commercial air travel, what with the long lines for security, overbooked flights, questionable “emotional support” animals, and the guy in 14F who can’t keep his elbows to himself. But for those lucky or savvy enough to fly in first or business class, hope is on the horizon as airlines double down on experiences and amenities for their most-prized clientele.

“Privacy is a theme,” says Brian Kelly, founder of the Points Guy, a travel website that reviews airlines. Take Delta’s new A350 aircraft, where every business-class seat comes with a sliding glass door, or Qatar Airways’ recently launched Q-Suite, with walls that push down for communal activities (work meetings and meals) and pull up for pursuits best enjoyed solo (movie binges and shut-eye).

Given that sleep has become a status symbol in our overscheduled era, airlines have devoted a lot of resources to soothing passengers into slumber. In January, American Airlines announced a new partnership with Casper, the buzzy mattress-in-a-box company, which will provide bedding for the lie-flat beds in the carrier’s premium cabins.

But even the softest of down from the trendiest of bedding brands is no match for the elements that assault the senses at 35,000 feet, with dry, stuffy air compounding the dehydrating effects of midair red wine consumption. One airline wondered if it had to be that way. Last year the Australian carrier Qantas partnered with researchers from the University of Sydney who used wearable technology to track how long-haul flights affect metabolism, hydration, and circadian rhythms. “When you’re a country like Australia that’s very far from almost everywhere, you’re forced to become experts in ultra-long-haul travel,” says Phil Capps, Qantas’s head of customer product and service.

Based on the findings, Qantas increased the size of the Dreamliner’s windows, turned up humidity levels, and developed a program of onboard exercises to stimulate blood flow. In March it will conduct another round of research, which will involve nutritionists and the in-flight food service team determining how the timing and ingredients of meals might aid in sleep and wakefulness.

Of course, relaxation in the air can be hard to achieve after a slog through a crowded airport, even if one has access to priority lanes and premium lounges. So what if you could skip the airport altogether? Private Suite, founded by Gavin de Becker, of the personal security firm Gavin de Becker & Associates, enables patrons to do just that.

Operating from a secluded one-story building down the street from Los Angeles International Airport, its 13 lounges are equipped with individual bathrooms, an assortment of snacks, and fully stocked bars. Members get in-suite manicures and massages while staffers check for delays. When the time is right, passengers are escorted through the suite’s state-of-the-art security checkpoint (used by the TSA to test new strategies and technologies) and, if necessary, Customs and Border Protection, generally without seeing a single other traveler. From there, they’re driven down the tarmac in a BMW and escorted onto the plane.

“When I was in my early twenties I worked for Elizabeth Taylor, and it was routine that we’d drive on runways and walk her up the stairs,” de Becker says. These days, he claims, “every major media figure traveling through LAX” flies care of his suite, avoiding paparazzi. “It’s also used by regular wealthy people and corporate people who want to spend their time resting up instead of lining up.”

Members pay annual dues that start at $7,500. Why? “Logistics,” says de Becker. “They don’t have to think about gate changes or boarding times. Logistics is the No. 1 thing they want. Peace is No. 2.”