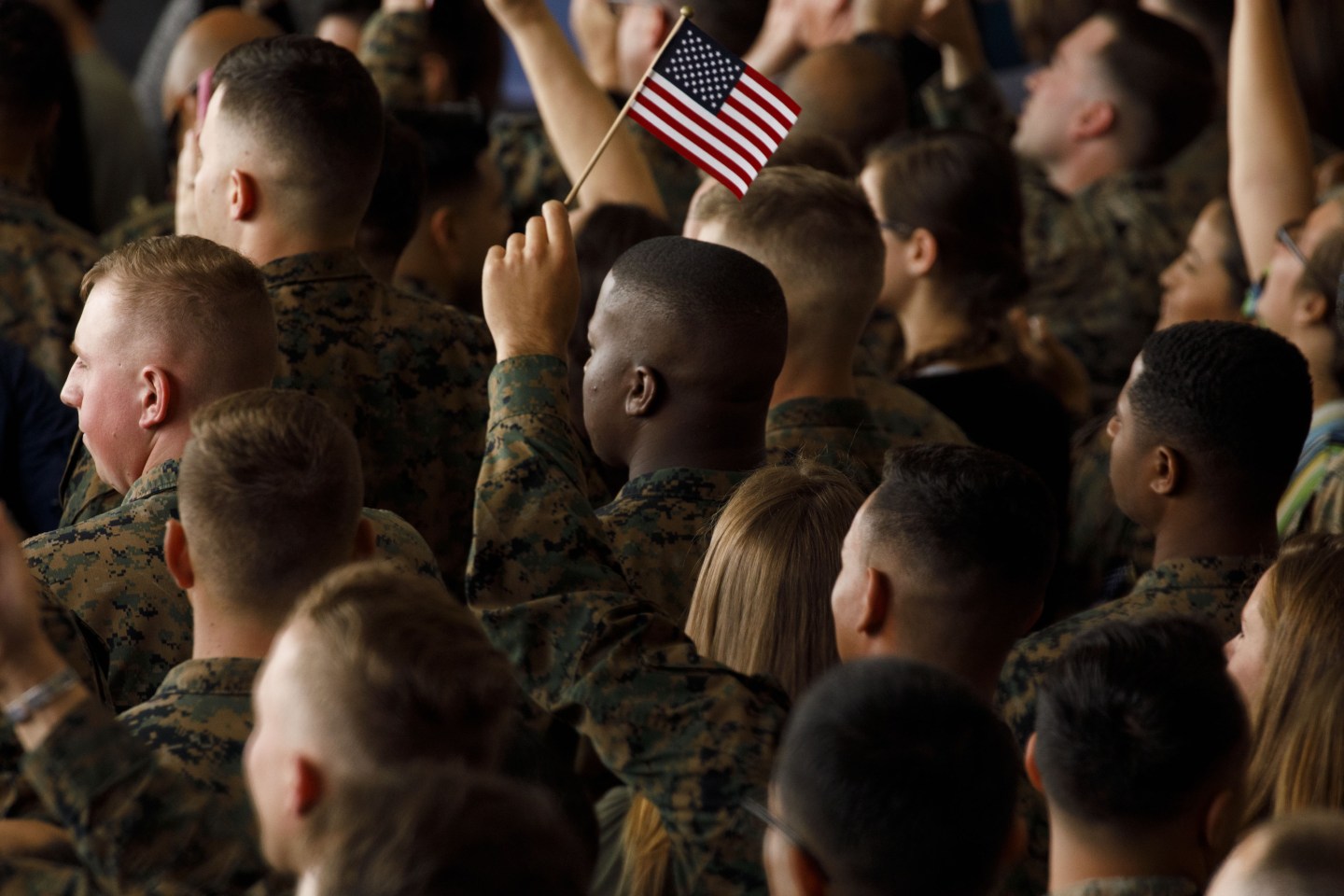 An attendee waves an American flag during an event with U.S. President Donald Trump, not pictured, at Marine Corps Air Station Miramar in San Diego, California, U.S., on Tuesday, March 13, 2018. Trump traveled to opposition territory -- California -- to fire up support for a wall along the U.S.-Mexico border, a project that has encountered resistance in Congress. Photographer: Patrick T. Fallon/Bloomberg
Patrick T. Fallon—Bloomberg via Getty Images

President Donald Trump moved to ban transgender people from the U.S. military in most circumstances, the latest in a series of actions that have met resistance from courts though may resonate with his most ardent supporters as midterm elections approach.

Trump’s statement was immediately denounced by civil-liberties groups and Democratic leaders. It capped a week in which the president followed through with his campaign pledge to impose sweeping tariffs on Chinese imports, and ousted his national security adviser, who was seen as a moderating influence, in favor of John Bolton, a hero of the right.

Trump said in the statement late Friday that the new policy would bar those with gender dysphoria. The term describes transgender persons uncomfortable with their biological sex, resulting in significant distress or difficulty functioning, according to a Feb. 22 memo to the president from Defense Secretary James Mattis. Persons with gender dysphoria “may require substantial medical treatment, including medications and surgery,” Trump said in his statement.

“Transgender persons who require or have undergone gender transition are disqualified from military service,” according to the Mattis memo.

The plan is less broad than a ban the president proposed in July that touched off a legal confrontation and reignited a cultural debate that has already seen fierce disagreements and campaigns in some states to require that students use school restrooms corresponding to their gender at birth.

The administration Friday asked a federal court in Maryland to lift its order against Trump’s prior transgender policy, saying that “far from a categorical ban,” the new rules would turn on gender dysphoria and contain “nuanced” exceptions allowing some transgender individuals to serve. The administration asked for a ruling from U.S. District Judge Marvin Garbis in Baltimore by May 23.

In announcing the earlier ban with a flurry of tweets in July, Trump cited threats to troop readiness and morale, as well as costs associated with medical services as reasons to reverse President Barack Obama’s policy allowing transgender people to join the armed forces.

In August, Trump followed with a directive to the military to reject openly transgender people as new recruits, and for Mattis to decide how to handle transgender personnel already serving in the armed forces.

Opponents, some of whom had been fighting the administration in court, were quick to responded to Trump’s latest move.

“The policy effectively coerces transgender people who wish to serve into choosing between their humanity and their country,” Joshua Block, a senior staff lawyer at the American Civil Liberties Union’s LGBT & HIV Project, said in a statement.

Aaron Belkin, the director of the the Palm Center, a California-based institute that researches the military service of sexual minorities, said there was “no evidence to support a policy that bars from military service patriotic Americans who are medically fit and able to deploy.”

“Cowardly, disgusting,” is how Nancy Pelosi, a California Democrat and the House minority leader, described the ban in a statement. “No one with the strength and bravery to serve in the U.S. military should be turned away because of who they are.”

In the 2016 campaign, Trump actively sought the support of socially conservative groups, some of whom supported the bathroom access restrictions, while also promising to “fight for” the gay and transgender community.

Gregory T. Angelo — president of Log Cabin Republicans, a group that advocates for equal rights for the LGBT community — said in a statement that the policy appeared to allow “continued open service of current transgender soldiers,” tantamount to an admission by the Pentagon that “there is ultimately no difficulty with the status quo” and that the policy is reverse engineered and may succeed only in “stoking culture wars.”

Civil-rights advocates said while some transgender service members might be permitted to continue to serve under the announced policy, the exceptions seemed unclear and the policy was likely to foster a hostile climate for those who do wish to remain in the military. They said they would continue to fight the policy in the courts.

At least four lawsuits have been filed seeking to overturn the ban, and several courts issued preliminary injunctions while the cases proceed. In November, Garbis, the federal judge in Baltimore, called the president’s tweets announcing the change in policy “capricious, arbitrary, and unqualified.”

And last week, a federal judge in Washington said that the Trump administration had failed to identify evidence it might use to defend the policy. That judge, Marsha Pechman, criticized the administration’s earlier claims that no such information could be identified because the policy was not in effect.

Care related to gender reassignment costs the Pentagon $2.4 million to $8.4 million annually, the larger number a little more than 0.1 percent of the military’s entire health-care bill, according to a 2016 Rand Corporation study. By contrast, the military spent $84 million on Viagra and other drugs for erectile dysfunction for active-duty troops, eligible family members and retirees in 2014 alone, the Military Times reported.