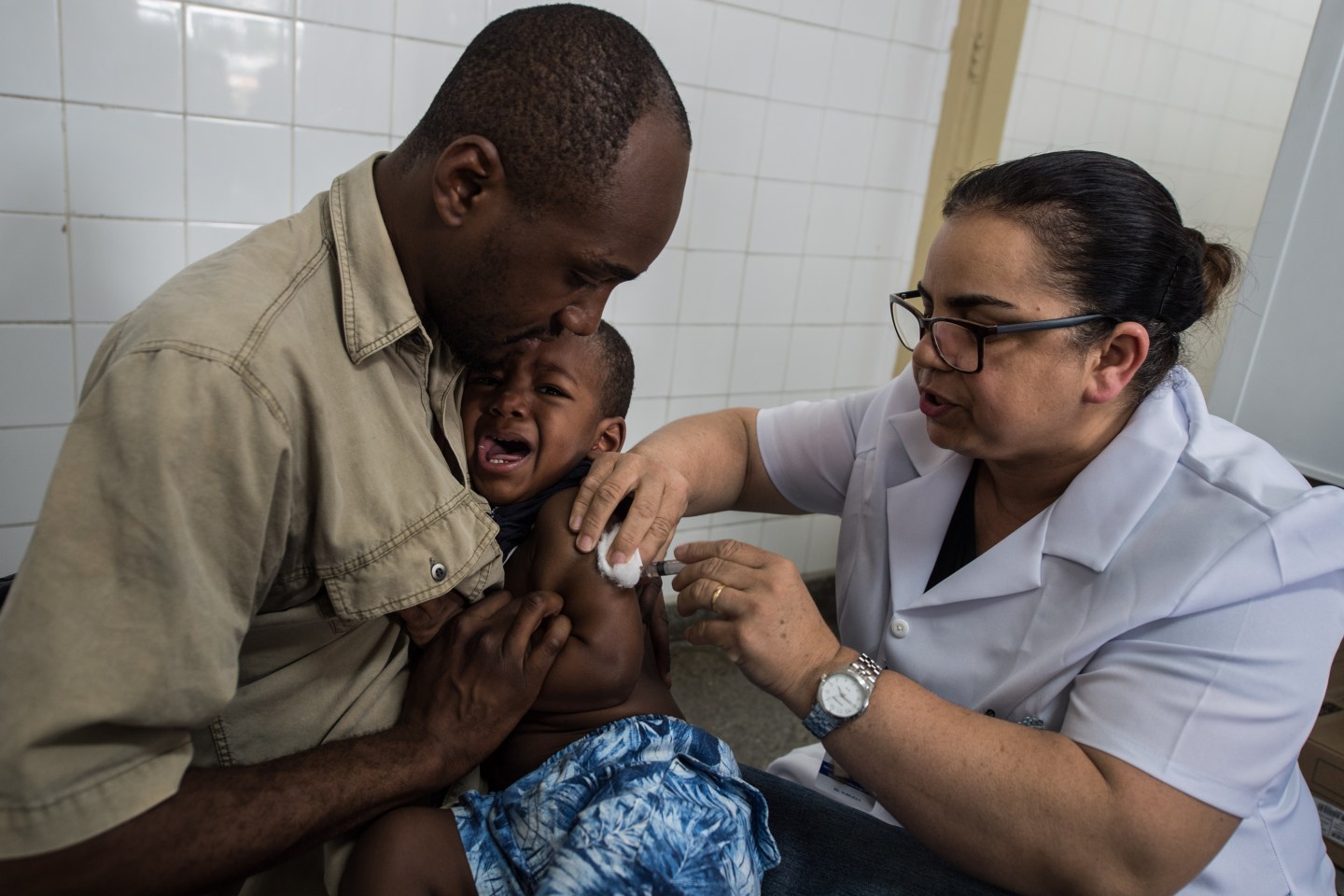 A boy cries as he is vaccinated against yellow fever, at a public health center in Sao Paulo, Brazil, on October 25, 2017. The recent death of several monkeys by yellow fever sparked a wave of concern in Sao Paulo and its metropolitan area, causing thousands of people to rush into health centers to be vaccinated. / AFP PHOTO / NELSON ALMEIDA (Photo credit should read NELSON ALMEIDA/AFP/Getty Images)
Nelson Almeida—AFP/Getty Images

A yellow fever outbreak in Brazil led to leaders calling for a country-wide vaccination campaign this week.

About 300 people have been killed by the disease, which is spread by mosquitoes and kills about 8% of people who contract it since July 2017, causing concerns about an epidemic if the virus hits the country’s densely populated cities.

How serious is a yellow fever outbreak?

This yellow fever outbreak could be the first full-blown urban epidemic since 1942 in Brazil.

The virus hasn’t impacted the country’s major cities yet, but it’s been spreading for a while.

“In 2016, we saw the most cases [of yellow fever] in decades,” Duane Gubler, a leading researcher of mosquito-borne diseases at Duke-NUS Medical School, told Vox.

Scientists aren’t sure what’s causing the spike in cases of the disease, which has seen a resurgence in Angola and other parts of Africa, along with Brazil. Some research has connected the rising number of infections to factors like climate change, global travel, and urbanization, which help mosquito-borne diseases spread more easily.

There is no cure for yellow fever, but there is a vaccine. Government officials have responded to the public health concerns by calling for all citizens to get vaccinated.

Unfortunately, there are only four manufacturers who work with the World Health Organization to produce it, and the rise in yellow fever cases has coincided with shortages of the vaccine.

Still, Brazilian health minister Ricardo Barros said all 27 states in the country will be targeted in a vaccination campaign aiming to reach 78 million people by 2019, according to the Associated Press.

What travelers should know

The Centers for Disease Control put out a warning last week that anyone traveling to Brazil should get vaccinated against the virus.

“In light of the expanding outbreak, we encourage travelers to take the extra time and extra steps in order to be vaccinated,” Dr. Martin Cetron, director of the CDC’s Division of Global Migration and Quarantine, said in a press briefing Friday.

The shot to protect against yellow fever had been a recommendation for Americans visiting Brazil and other South American countries, but raising the travel advisory to a level two alert reflects the danger of the current outbreak.

Four tourists have died from yellow fever this year. In total, 10 international travelers, none of whom were vaccinated, contracted the disease since January.

Gubler, the researcher at Duke, recommended a more conservative approach. “If I were still at CDC, I would advise travelers to any part of Brazil to get vaccinated before they go, not just where cases are reported,” he said. “These kinds of diseases have a way of sneaking into new areas without detection and are transmitted silently for a time, and identified only after a number of cases have occurred.”

Tourism is important to the Brazilian economy, accounting for more than 3% of the country’s GDP and 2.5 million jobs in 2016 when the Olympics were held in Rio de Janeiro.

“When they stopped coming to us, we started going to them,” Nancy Marçal Bastos, health and sanitation director for northern São Paulo, told the New York Times. “People have a lot of excuses for why they haven’t gotten the vaccine yet, but when we show up, it’s usually easy to convince them.”

A shortage of the vaccine made this a challenge, as did misconceptions about the preventative treatment.

Although the vaccine is highly effective, it can have adverse side effects for about one in 100,000 people and kills one in a million. However, the shot makes 90% of recipients immune to the virus within 10 days of being administered.