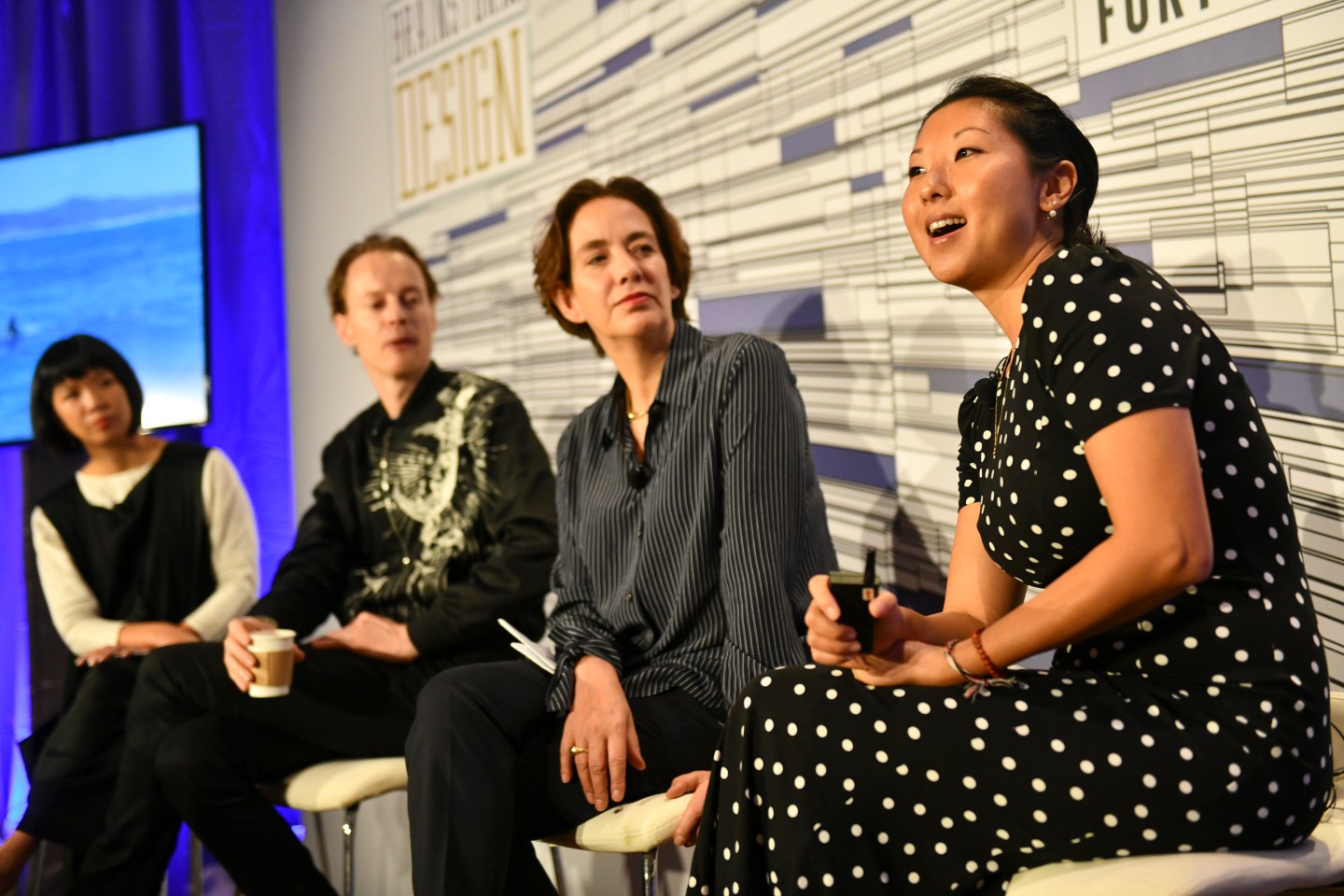 Good design, we all agree, should be sustainable. But how exactly are designers creating products, environments and services that are ecologically sound while economically viable? And how, in an industry often characterized by the embrace of the new, do we eliminate waste?

Ong, a former creative director at Jimmy Choo, left her career in luxury goods to start an eponymous label that produces shoes from upcycled rubber, leather offcuts, charcoal and bamboo. “Sustainability is a big topic, which can put people off,” she said, but she believes that we can start small. Whether in footwear decisions, choosing cups and saucers over disposable beverage containers, or eliminating single-use plastic, “we need to individually do our part.”

In contrast to Ong’s product-based approach, Roosegaarde’s work has mainly taken the form of large-scale installations, among them a fluorescent bike path that glows like Van Gogh’s night skies, giant kites that can supply up to 200 households with green energy, and “the world’s largest vacuum cleaner” to suck up air pollution in public spaces. “My designs use principles from nature,” he said. “The wind and the sun have all been there for a long time, so why don’t we leverage them to create something new?” Designers helped engineer present environmental problems, Roosegaarde added. “Let’s engineer our way out of it.”

Withers, a passionate advocate for the sustainable use of Earth’s most critical resource, water, has collaborated with the likes of London department store Selfridges, Danish textiles giant Kvadrat, and Brooklyn design hub A/D/O on experiments and educational initiatives. “I imagine alternative futures,” she told delegates, “ways to use water more responsibly and imaginatively.”

The speakers agree that sustainability doesn’t have to be about doing less. “That’s the wrong way of thinking,” said Roosegaarde. “We should do more. Instead of flying less, design a better airplane; instead of drinking less bottled water, switch to sustainably produced bottles.”

Withers noted that the plastic PET bottle arrived in 1973 and has been “cheap, functional, though massively dangerous. Changing that takes something equally strong, with the power of marketing behind it.” She pointed to a recently developed, red algae alternative by designer Ari Jóns, which keeps its form when full decomposes as soon as the water is gone.

Sustainable technology already exists, added Ong, “but you have to make a conscientious decision to jump over” ostensible hurdles of cost and convenience.

The speakers brought up Raymond Loewy’s MAYA principle. Short for “most advanced yet acceptable,” it postulates that effective design is about standing at the edge of what is and what isn’t possible. “And what wasn’t possible a few years ago is possible today,” said Roosegaarde.

“We designed the mess [of plastic bottles], we also have the responsibility to design our way out if it. It’s about materials and technology, but also expectations and values. We have to declare, “we don’t accept this anymore. It’s crazy, we’ve had enough.'”