21 States Are Suing the FCC to Restore Net Neutrality Rules 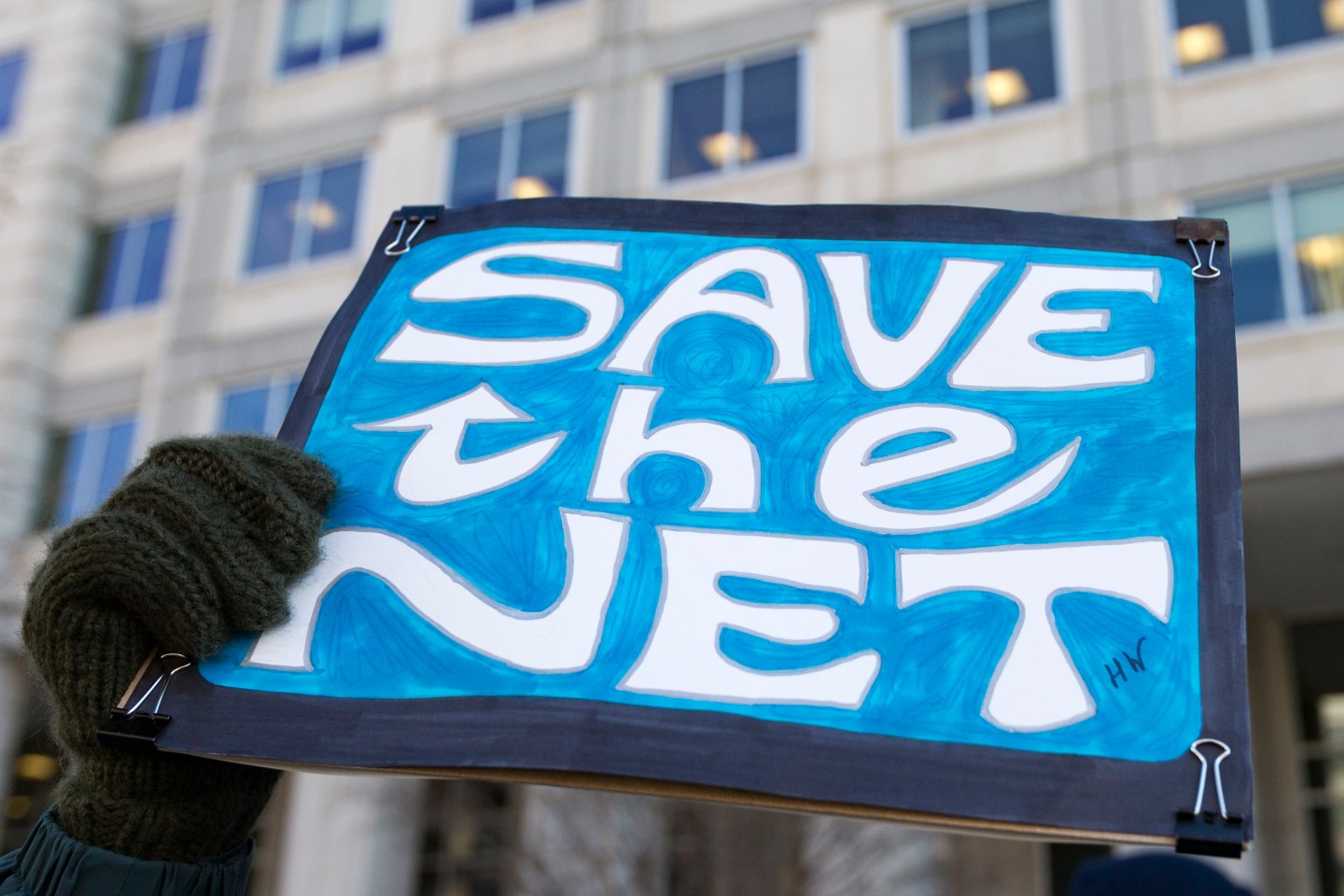 TOPSHOT - A woman holds a 'Save the Net' protest sign during a demonstration against the proposed repeal of net neutrality outside the Federal Communications Commission headquarters in Washington, DC on December 13, 2017. / AFP PHOTO / Alex EDELMAN (Photo credit should read ALEX EDELMAN/AFP/Getty Images)
Alex Edelman—AFP/Getty Images

A group of 21 U.S. state attorneys general filed suit to challenge the Federal Communications Commission’s decision to do away with net neutrality on Tuesday while Democrats said they needed just one more vote in the Senate to repeal the FCC ruling.

The state attorneys, including those of California, New York and Virginia as well as the District of Columbia, filed a petition to challenge the action, calling it “arbitrary, capricious and an abuse of discretion” and saying that it violated federal laws and regulations.

The petition was filed with a federal appeals court in Washington as Senate Democrats said on Tuesday they had the backing of 50 members of the 100-person chamber for repeal, leaving them just one vote short of a majority.

Even if Democrats could win a majority in the Senate, a repeal would also require winning a vote in the House of Representatives, where Republicans hold a greater majority, and would still be subject to a likely veto by President Donald Trump.

Senator Ed Markey said in a statement that all 49 Democrats in the upper chamber backed the repeal. Earlier this month, Republican Senator Susan Collins said she would back the effort to overturn the FCC’s move. Democrats need 51 votes to win any proposal in the Republican-controlled Senate because Vice President Mike Pence can break any tie.

Trump backed the FCC action, the White House said last month, and overturning a presidential veto requires a two-thirds vote of both chambers.

States said the lawsuit was filed in an abundance of caution because, typically, a petition to challenge would not be filed until the rules legally take effect, which is expected later this year.

The FCC voted in December along party lines to reverse rules introduced in 2015 that barred internet service providers from blocking or throttling traffic or offering paid fast lanes, also known as paid prioritization. The new rules will not take effect for at least three months, the FCC has said.

Senate Democratic Leader Chuck Schumer said the issue would be a major motivating factor for the young voters the party is courting.

The FCC vote in December marked a victory for AT&T (T), Comcast (ETB) and Verizon Communications (VZ) and handed them power over what content consumers can access on the internet. It was the biggest win for FCC Chairman Ajit Pai in his sweeping effort to undo many telecommunications regulations.

While the FCC order grants internet providers sweeping new powers it does require public disclosure of any blocking practices. Internet providers have vowed not to change how consumers obtain online content.

House Energy and Commerce Committee Chairman Greg Walden, a Republican, said in an interview on Tuesday he planned to hold a hearing on paid prioritization. He has urged Democrats to work constructively on a legislative solution to net neutrality “to bring certainty and clarity going forward and ban behaviors like blocking and throttling.”

He said he does not believe a vote to overturn the FCC decision would get a majority in the U.S. House. Representative Mike Doyle, a Democrat, said Tuesday that his bill to reverse the FCC decision had 80 co-sponsors.