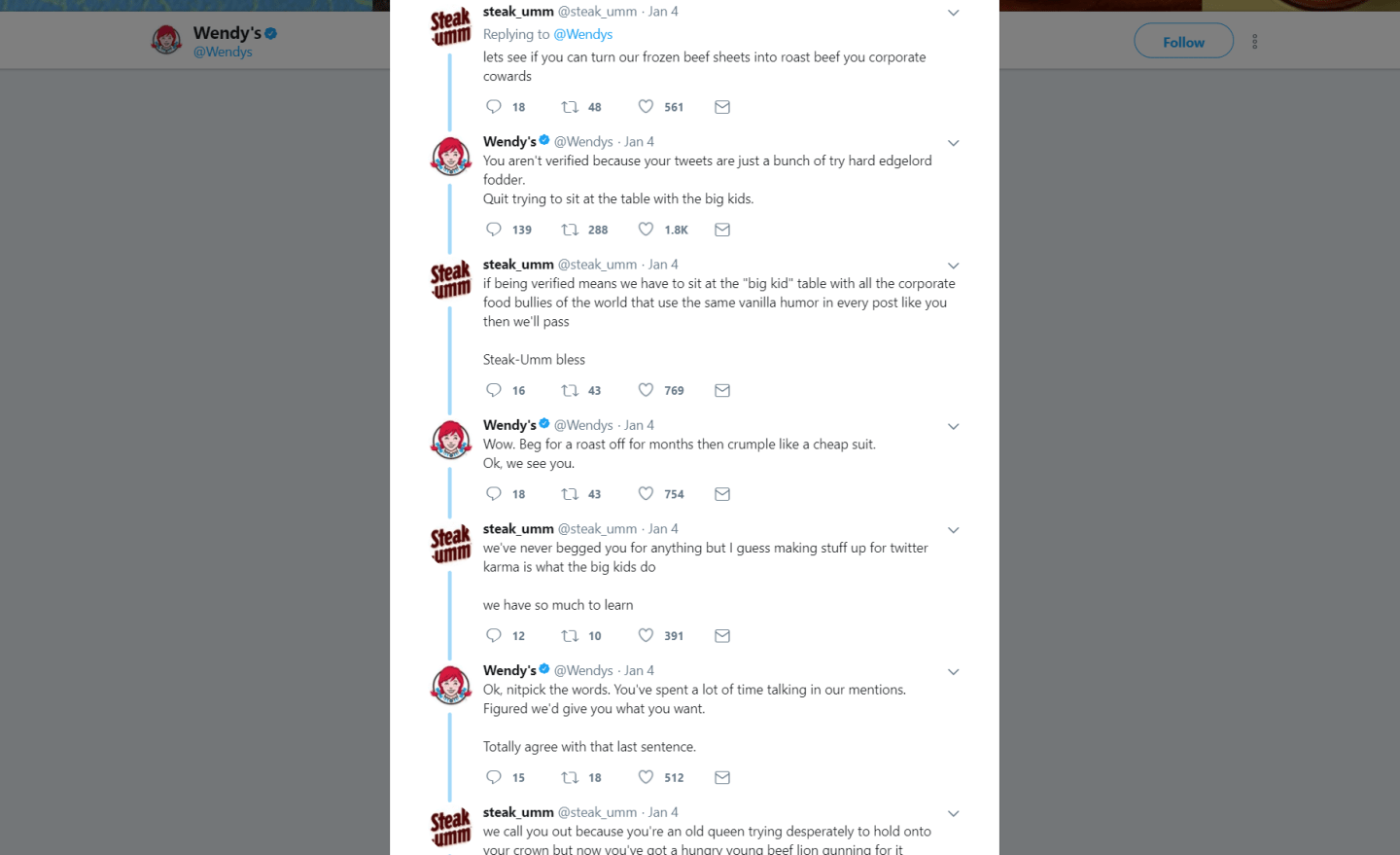 On Thursday, a strange Twitter battle erupted between Wendy’s, the global burger chain, and Steak-Umm, an innovation of frozen beef science. The sharp-edged exchange exemplified some of the risks brands are willing to take to get traction on the platform, and several serious problems Twitter itself is struggling to come to grips with.

It all started with Roast Day. Wendy’s is notorious for a quippy, snarky Twitter presence described as “savage” by no less an authority than BuzzFeed. Its declaration of ‘National Roast Day’ was an offer to playfully insult all comers, in the style of the late, great Don Rickles.

Things got darker quickly, though, when the corporate account for Steak-Umm challenged Wendy’s to “see if you can turn our frozen beef sheets into roast beef you corporate cowards.”

Wendy’s immediately shot back that “You aren’t verified because your tweets are just a bunch of try hard edgelord fodder. Quit trying to sit at the table with the big kids.”

I don't think anyone anticipated this stage of corporate dystopia pic.twitter.com/h9FlZZJP3O

The exchange continued for a half-dozen more messages, with Steak-Umm at one point referring to Wendy’s as “an old queen trying desperately to hold on to your crown.”

If it was supposed to be a good-natured roast, it definitely didn’t stay that way.

The whole thing would be horrifying, if not outright incomprehensible, to a conventionally upbeat advertising agency. But it’s par for the course on Twitter, where brands – and other prominent figures – have gained huge traction by adopting personas on the spectrum between semi-literate weirdo and condescending jerk.

The fact that nastiness has become a viable strategy for promoting major brands is just the dramatic tip of a huge iceberg that could still sink Twitter. Critics have blamed Twitter’s hyper-competitive, snarky, high-school-lunchroom vibe for stalled user growth. Even one of its biggest investors has described the Twitter experience as “scary” and “lonely” for most people.

After years of taking an absolutist free-speech stance, Twitter last summer seemed to get serious about cracking down on the worst kinds of abuse and hate speech. Public backlash and looming government regulation likely added to the underlying business motivation.

Steak-Umm is a newcomer to the game, with a Twitter-perfect style that’s simultaneously upbeat, bizarre — and frequently furious at Twitter itself, primarily for not granting it the ‘verified’ blue check mark.

our time is now
the story is breaking
the beef is steaking
the smell of fresh justice drifts in the evening air
we are finally coming home#VerifySteakUmm pic.twitter.com/c6XlMb5QFE

The question of verification has recently become another headache for Twitter. Officially, the blue checkmark is only a guarantee that an account belongs to the company or person it claims to. But it has come to be seen as a form of endorsement or approval, and Twitter has faced major heat for verifying white supremacists including Richard Spencer and Jason Kessler.

After that incident, Twitter paused its verification process while it reconsidered its policies. Waging a fruitless war in the face of that pause is part of the joke for Steak-Umm, which is tapping into a deeper well of user frustration and confusion.

To top it all off, Steak-umm claims its Twitter account was blocked from posting briefly on Friday, allegedly for tweeting too much. That sounds similar to the experiences of other real users suspended by automated filters designed to fight bots and spam — including Russian bots aimed at influencing Western politics. It’s another irksome side-effect of Twitter’s efforts to create a friendlier environment and attract new users.

None of this is to say that Steak-Umm or Wendy’s are doing anything wrong, necessarily. Wendy’s Twitter account is now borderline iconic, and Steak-Umm, by going to war with Twitter itself, has enjoyed significant follower growth. But their success speaks to a broader discontent that should have @jack, and his many investors, pretty worried.

go ahead @jack, suspend our account
we will only rise up stronger from the ashes like a beef phoenix pic.twitter.com/qfdnNHyUtT