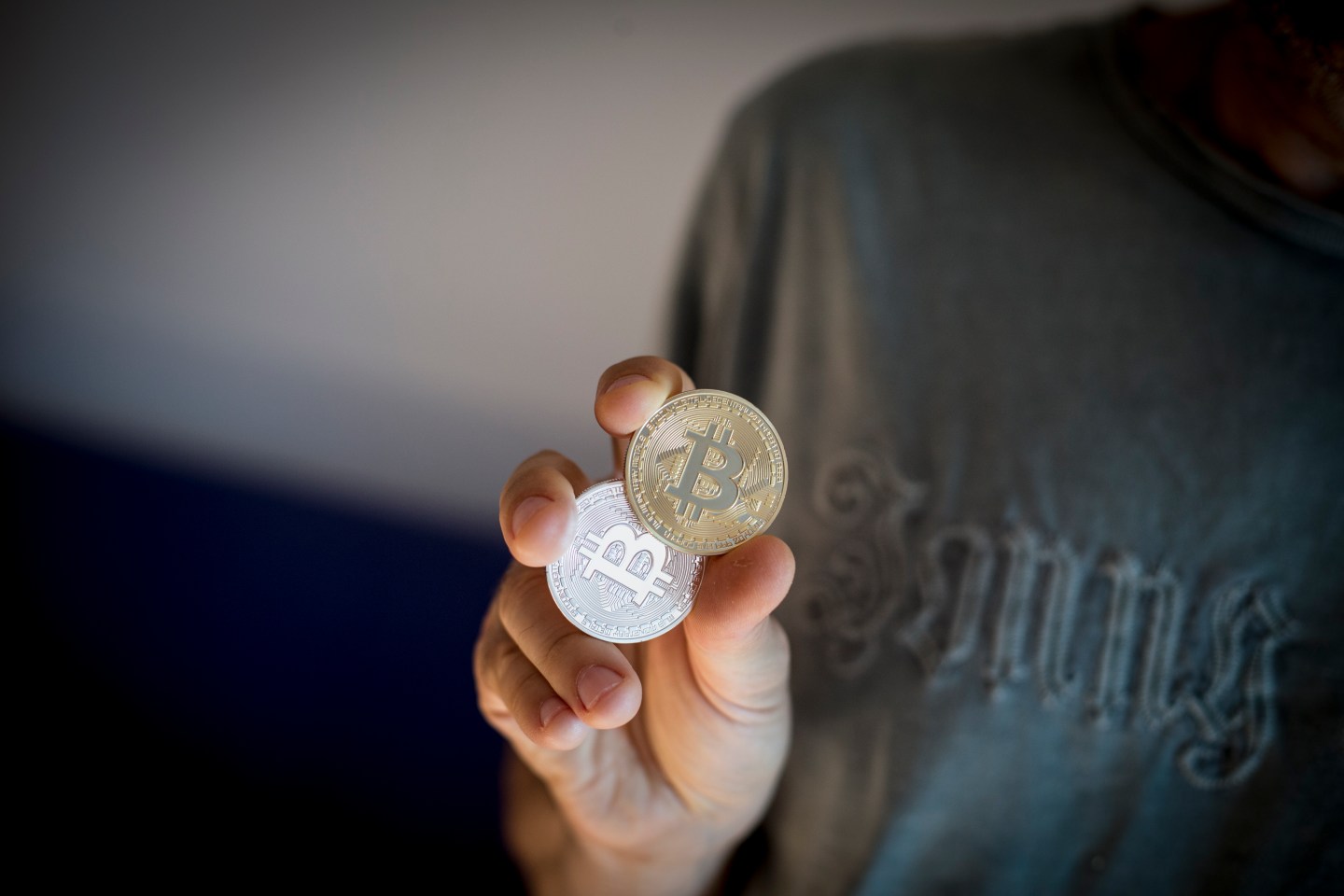 A view of Bitcoin token. A split in the Bitcoin community is set to create a new incompatible version of the cryptocurrency. They plan to offer existing investors a matching amount of a new virtual asset - called Bitcoin Cash - which could put pressure on the value of original bitcoins. The bitcoin (BTC) hard fork will be happening on midday in London i.e. 12:20 UTC. (Photo by Manuel Romano/NurPhoto via Getty Images)
Manuel Romano/NurPhoto/Getty Images

How much hype is there around Bitcoin? Just take a look at the recent flood of media coverage. It feels by now that every journalist and his or her dog has written at least one story about the cryptocurrency.

To get real insight about the latest Bitcoin news, it’s best to turn to Twitter. Many of the most important figures in cryptocurrency are heavy users of the social media platform, and they are not shy about sharing their opinions. That’s why Fortune’s The Ledger is sharing 19 of our favorite crypto sources from Twitter.

Keep in mind that most of these folks have a bullish position on digital currency—understandable since they helped build it!—and beware that some are brash or even outright offensive. But all of them know what they’re talking about and share information you will only read about in the press days or weeks later. Here are our choices, in no particular order:

When he introduced Ethereum, Buterin was a stammering college dropout. Online, he’s a font of charmingly wonky commentary that ranges far beyond cryptocurrency.

First of all, I want to introduce a concept I call "freedom through turing completeness".

Antonopoulos has spent the last five years developing a deep understanding of cryptocurrency from every angle, and perfecting concise, compelling explanations of all of it. His Twitter feed is a tantalizing glimpse of what his writing and speaking have to offer.

"Madam, I'm concerned about the progress of your pregnancy. At current rate of growth, your belly will be the size of this building in just 5 years"

Original proposer of the “smart contracts” concept behind Ethereum—in 1996!—Szabo is also frequently rumored to be Satoshi Nakamoto. ‘Nuff said.

Why very small payments are hard: "it's important to distinguish between technological and mental transaction costs", and the latter are usually more important. https://t.co/YhsDASgemF https://t.co/fJMr2VDQxc …

A former Bitcoin Core developer, Andresen is now a gadfly partisan of Bitcoin Cash and a good, if infrequent, source of insight from one who knows.

Lee is the creator of LiteCoin, the most significant early Bitcoin alternative. He tweets a lot about trading and market infrastructure.

I just noticed Cardano (ADA) is #6 on CoinMarketCap. How did it become a $10B coin when it's only 3 months old and the only major exchanges trading it is Bittrex and Binance and without even any fiat trading pairs?

Either the market is crazy or Cardano will end world hunger.

7.) Brian Armstrong, the CEO of Coinbase

When the biggest U.S. cryptocurrency exchange tells you to not buy so much bitcoin in the midst of a historic rally—that’s when you know you can trust them. Armstrong mostly tweets about Coinbase itself.

Pleased to report a partial victory for Coinbase over the IRS subpoena from nearly a year ago. We narrowed the scope of the government's request by 97% – a win for customer privacy. https://t.co/Pjzj8MFDNS https://t.co/xY2idBBuYa

Stark is one of the main creators of the “second layer” that some think will be the future of blockchain. She’s also one of the most prominent women in crypto and a relentless critic of the ICO craze.

If I only had a bitcoin for every ICO I heard about *this week* that makes zero sense whatsoever…https://t.co/jcZXxxqMZz

Selkis, who ran news outlet CoinDesk and built its event business, knows everyone in crypto. His Twitter feed offers no-B.S. observations on bitcoin and alt-coin investing without the smug insider stuff you find on other accounts. Bonus points for his avatar.

If you're new to crypto:

Baldet somehow straddles two worlds: She’s a high-flying blockchain executive at J.P. Morgan but also a trusted figure in the various demi-mondes that make up the crypto-currency world.

A gun-toting OG bitcoin developer, Lopp had his home SWATted during a bitter debate over the Segwit 2x fork—and kept right on coding!

Q: What have I gotten myself into?
A: Nobody knows.

The ever-bullish trade publication has a global news team with desks around the world. Media outlets from the New York Times to the Wall Street Journal rely on its reporting because, if there’s crypto-news, they’re on it.

He’s not perfect (his theories about ASICBoost remain suspect) but WhalePanda’s anonymity leaves him free to say exactly what he thinks. He is also President of Bitcoin, based on an unscientific poll conducted on his own account.

Congrats @SatoshiLite & @fluffypony on $LTC and $XMR being 2 and 3 on Panda's list of legit cryptocurrency projects. 😉 pic.twitter.com/ivvwdfM9wG

Ver was the first entrepreneur to invest in a Bitcoin startup, and was almost universally worshiped until the bitter scaling debate led him to essentially declare war on Bitcoin’s Core development team. Once known as Bitcoin Jesus, he now’s now more “Bitcoin Judas” to many.

Mow is a tireless advocate for the technological integrity of the original bitcoin protocol, and is quick to call BS on those he sees as corrupt developers or pump-and-dump scammers (his original takedown of Bitcoin Cash is an essential read). Mow is also essential for his insights into China-based shenanigans.

"Ironic" doesn't quite fit. Need something a little stronger to describe a coin that forked off because they needed bigger blocks but can only produce small blocks. #Bcash https://t.co/B4gfXjnO8H

A loud-mouth libertarian, Byrne’s Twitter feed is as insightful as it is obnoxious. The man understands crypto deeply, and is worth following—though half his tweets reflect an inexplicable obsession with the large rodent known as the marmot.

"People who bought at $20,000 on credit cards charging 24% APR are going to lose their shirts, sure, but just think about all the money Tim Draper and Mike Novogratz are making."
– Bitcoin, today

Voorhees, CEO of Shapeshift, is a cryptocurrency entrepreneur second and a committed libertarian first. Follow for insight into the political implications of bitcoin.

There should be no monopoly on money. A true market economy requires freedom in the production of all goods, most of all in money itself. https://t.co/XDRkk4vwjH

Demirors straddles the world of entrepreneurship, academe and journalism. Her tweets are brimming with smarts and strategic vision.

interesting to see how media is perpetuating false narratives. always do your due diligence. question everything. https://t.co/zjOJxrRCfW

Bitcoin Twitter is full of huffing and puffing, and so it’s good to have people like Demeester as a counter-balance. Understated and fair.

As a student in '09 and '10, I spent a lot of time researching fraud and fraud cycles. Glad I have that background because the crypto space is rife with scams. https://t.co/1L6GZg4N3Y pic.twitter.com/RxKkCQ6MpI