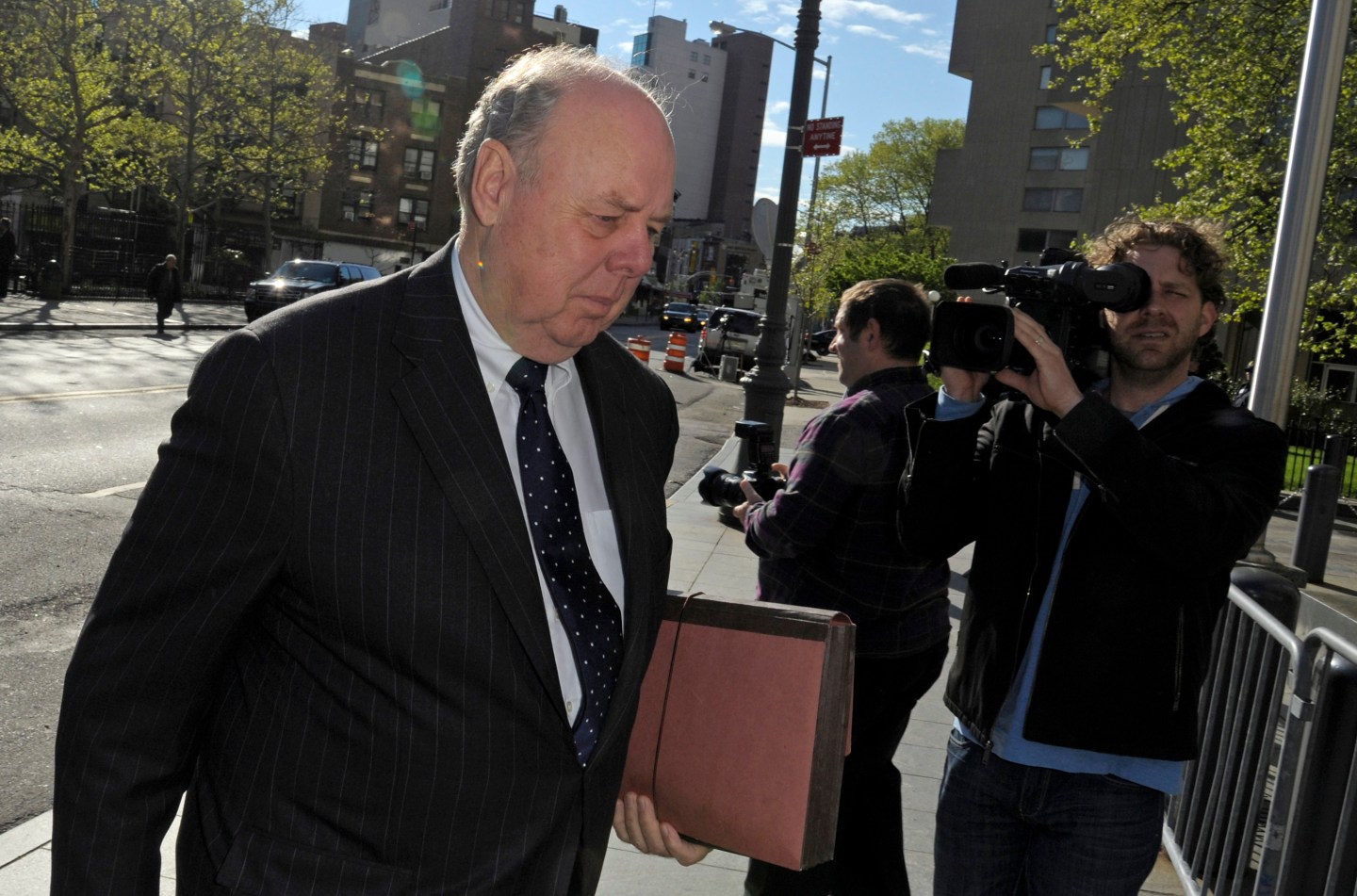 John Dowd, lead attorney for Raj Rajaratnam, co-founder of Galleon Group LLC, enters federal court in New York, U.S., on Thursday, May 5, 2011. Jurors in the insider-trading trial of Rajaratnam reheard recordings of wiretapped conversations played for them last week after restarting deliberations following the replacement of one member of the panel. Photographer: Peter Foley/Bloomberg via Getty Images
Peter Foley—Bloomberg via Getty Images

It couldn’t have been obstruction of justice, for example, for Trump to ask the FBI director to drop the criminal investigation of Trump’s former national security advisor, Michael Flynn, who pleaded guilty to a felony last week. Dowd’s argument was that the Constitution makes the president the nation’s “chief law enforcement officer,” and that he “has every right to express his view of any case.” Therefore, the president can’t obstruct justice.

If that sounds like a non sequitur, it is. It amounts to saying that since the president oversees federal law enforcement, anything he does in that capacity has to be allowed. It’s a terrible argument. It is, in fact, almost precisely the argument that President Richard Nixon made 40 years ago, defending his authority to order illegal wiretaps and burglaries. “When the president does it,” Nixon said, “that means it is not illegal.” Nixon’s claim was rightly ridiculed, and Dowd’s variant isn’t much better.

Federal statutes make it a crime to “corruptly” interfere with, impede, or influence an official investigation, or to try to do so. “Corruptly” basically means with bad intent. It’s not a crime for a local sheriff to shut down an investigation because it doesn’t seem to be going anywhere; it is a crime if the motive is to avoid implicating the sheriff’s brother-in-law. The same rules apply to the president. There’s no exception in obstruction of justice statutes—or in any other criminal statutes—for the head of the Executive Branch.

There’s a longstanding debate about whether a sitting president can be prosecuted for a crime. Some legal scholars have thought that facing criminal charges while still in office would be an unacceptable distraction from the president’s important duties. That’s a tough argument to make, though, with respect to a president who spends much of his time watching television talk shows. More importantly, there’s little doubt that a president can be guilty of a crime committed while he is in office, or that—statutes of limitation aside—he can be prosecuted for the crime once he is again a private citizen. For example, when President Gerald Ford pardoned Nixon for offenses that Nixon may have committed while in office, the background assumption—which Ford made explicit—was that, without a pardon, Nixon could in fact be indicted by a grand jury and face a criminal trial.

One reason some scholars have suggested that a sitting president can’t be indicted is that the Constitution provides a separate way to deal with criminality in the Oval Office: impeachment. Impeachment is inevitably a political process, because it is handled entirely by Congress. The House of Representatives decides whether to charge the president, and the trial is conducted by the Senate. But impeachment is a legal process, too. The Constitution provides a legal standard for impeachment: “treason, bribery, or other high crimes and misdemeanors.” And Congress has historically taken care to interpret that clause in a principled manner.

One rule that emerges from history is that “high crimes and misdemeanors” can include obstruction of justice by the president. Nixon’s obstruction of justice—including his efforts “to interfere with the conduct of investigations by the Department of Justice”—constituted part of the grounds for the articles of impeachment adopted by the House Judiciary Committee in July 1974, triggering Nixon’s resignation. The articles of impeachment adopted by the full House of Representatives against President Bill Clinton in 1998 also included obstruction of justice, relating to the sexual harassment suit brought against Clinton by Paul Jones and the cover-up of Clinton’s relationship with Monica Lewinsky. The Senate rejected the charges against Clinton. What it did not reject was the underlying tenets that obstruction of justice can be grounds for impeachment, and that no one, not even the president, is above the law.

David Alan Sklansky is a law professor at Stanford and a former federal prosecutor.